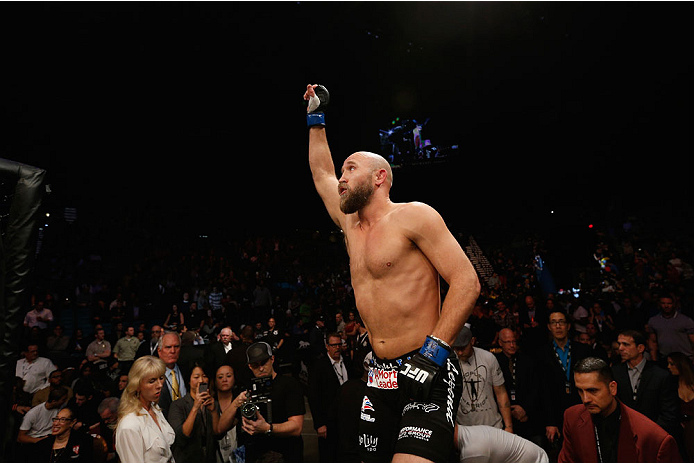 There’s a lot of “new” around Joshua Burkman these days. You can start with his name, which isn’t really new, but it’s new to the UFC world that has been calling the former Ultimate Fighter cast member Josh since 2005.

Then there’s the return of American Whu-Hitu to the Burkman repertoire, and most notably, a new weight class, as the longtime welterweight moves down to 155 pounds for his Saturday bout against KJ Noons.

So where do we begin? How about with the name.

“It’s mostly about paperwork,” Burkman laughs, “But it’s funny because I’ve been reading the Book of Joshua in the Bible again, so maybe that ties to it. And I’ve grown up a little bit.”

Fair enough. As for the rest, he says “What it’s really about, I feel like I’m in a place where I’ve taken my career over as far as the training camp, the style I want to fight, how I want to do it, and all those things. I think it’s just me coming into my own. Changing my weight class, it’s almost like I’m reinventing myself and reviving my career. There’s definitely a rebirth happening. I feel better than ever, I’m healthy, my body’s moving proper, and I feel like I’m about to have one of the best performances of my career, and I’m doing it in a weight class that I’ve never fought in before. There are a lot of unknowns, but I feel like it’s really a rebirth.”

Burkman, 35, has been doing this for a long time. When he’s on, he’s one of the best in the game, but consistency has occasionally been an issue. In his defense though, win or lose, he’s always been a straight shooter. So even though many fighters in their mid-30s respond to a losing streak with new beginnings, when Burkman talks of the changes taking place over the last few months, they all sound legit and they all make sense, maybe with the exception of the move to the lightweight division, which came as a surprise to all but “The People’s Warrior,” who understands the skepticism from some.

“I haven’t weighed 155 pounds since seventh grade,” he laughs. “That should put it into perspective.”

If we’re talking perspective, maybe the move wasn’t necessary, considering that his three 2015 bouts against Hector Lombard, Dong Hyun Kim and Patrick Cote, which resulted in an 0-2, 1 NC slate for the Utah native, took place against three of the biggest welterweights in the division. But Burkman dismisses such talk, admitting that he thought of a move south all last year.

“I felt like dropping to 155 for the entire year but I never did it because (UFC matchmaker) Joe Silva gave me some really interesting, awesome fights,” he said. “I feel like I’ve wanted to take the hardest fights that I could possibly get, just to get myself better and better. Even if it meant that there were some struggles along the way. The adversity of 2015, it’s gonna be tough to ever match that. I had a really tough year professionally.”

Oddly enough, it was one of his best years personally, as he and his wife welcomed another son into the world and bought a home. It allowed Burkman to keep everything that happened in the Octagon in perspective, and now he’s ready – not for another run, but for a new one.

“The truth is that my whole career has been a journey, as is life, and I’ve always thought that I had the ability to be a Randy Couture in this sport,” he said. “Not only am I 35, but I also feel that I have some of the best years of my career right in front of me. It really is a new start. I feel like this is the beginning of the best part of my story, the best part of my career.”

“Everybody’s seen me be up and down in my career,” Burkman continues. “I just think I have more balance in my life right now, I’m healthier, more disciplined than I’ve been, and 155 pounds is where I belong. Sometimes it’s adversity that helps us to get to another level. And I’m all right with that. If losing a fight is the worst thing that happens to me, then I consider my life very blessed.”