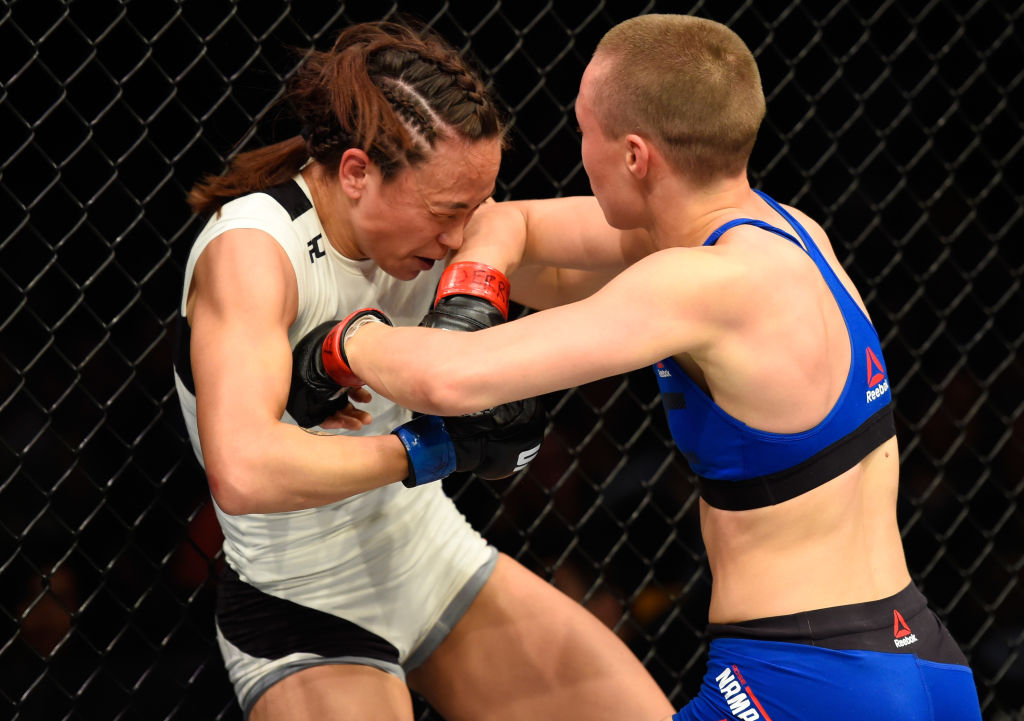 In Saturday’s UFC Fight Night co-main event at Sprint Center in Kansas City, Rose Namajunas closed in on a shot at the strawweight title with a spectacular second-round submission of Michelle Waterson.

“I feel like I can go all the way to the belt and hold it for a while,” said Namajunas, who has her sights set on the winner of the UFC 211 bout between 115-pound champion Joanna Jedrzejczyk and challenger Jessica Andrade. “Joanna or whoever’s gonna win that fight, I’m coming for you. Be careful.”

Waterson’s striking was sharp from the start, and when Namajunas tried to close distance, it was the Albuquerque native who scored the takedown. The patient Namajunas calmly took Waterson’s back and then landed in her foe’s guard, landing some hard blows in the process. Waterson rose, but was taken down again before round’s end.

A minute into round two, Namajunas landed a right kick to the head that sent Waterson to the canvas. Namajunas shot in for the finish, but Waterson recovered quickly. Namajunas kept firing though, and while Waterson rose to her feet, the Milwaukee native wasn’t done yet, and she caught her opponent in a rear naked choke that produced a tap out at 2:47 of the second frame.

The seventh consecutive victory for No. 6-ranked middleweight Robert Whittaker was his most important, as he stopped No. 3-ranked Ronaldo “Jacare” Souza in the second round, shaking up the 185-pound title picture in the process.

Whittaker had an excellent first round thanks in part to his speed and striking accuracy at range. But the true telling moment of the opening stanza was a sequence midway through the round where he was able to avoid Souza’s attempts to put him on the mat with some slick scrambles.

A huge right hand in the opening 30 seconds of round two dropped Souza hard to the mat, and while the Brazilian recovered quickly, his wish to keep Whittaker on the canvas was not granted. Back standing, Whittaker kept scoring with hard punches and kicks, and with under two minutes left, he slammed a right kick to the head of his foe, wobbling him once more. In the midst of the follow-up barrage, Souza fell to the deck, and after more ground strikes, referee Mario Yamasaki intervened, halting the bout at the 3:28 mark.

Brazilian featherweight prospect Renato Moicano may have graduated to contender at 145 pounds, as he defeated No. 5-ranked Jeremy Stephens.

Moicano fought a near-perfect fight in the opening round, using movement and leg kicks to keep Stephens at bay, and then capping things off with a late takedown that added to his scoring total.

Stephens got closer in the second, perhaps evening things up on the scorecards as he kept the pressure on while Moicano slowed.

An early takedown by Moicano in the third put him back ahead, but Stephens didn’t stay on the mat long, as he rose and kept stalking the Brazilian. Moicano bloodied the veteran, but Stephens didn’t stop his forward march, and he was landing his share of punishing blows, though not enough to get the decision.