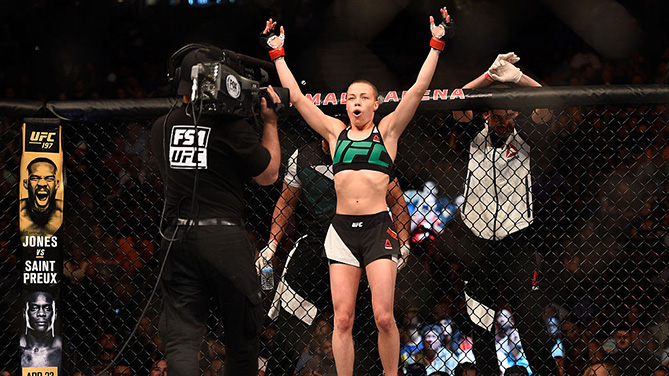 The time is now for Rose Namajunas.

Ever since her star-making turn on Season 20 of The Ultimate Fighter, where she fought her way to the finals before losing to Carla Esparza, expectations have been sky high for Namajunas. A subsequent three-fight winning streak that began against Angela Hill, and continued with Paige VanZant and Tecia Torres, only ratcheted the pressure even higher. But the 24-year-old has been urging everybody to calm down, claiming she was in no rush.

As Namajunas puts it, “Rose decides what Rose wants to do."

But heading into her fight with top-five ranked Karolina Kowalkiewicz in the co-main event of UFC 201 at Philips Arena in Atlanta this Saturday, the No. 3 ranked “Thug Rose” has changed her tune.

“I didn’t feel ready before,” Namajunas said of her trajectory toward a title. “It’s where I’m at mentally right now. It’s hard to explain. It’s just a feeling that you have. I just feel ready. You only know when you’re ready. I felt like, ‘Yes, I will be there in a second. Let me just catch up. I need to get this other experience under my belt first.’

“I just let these distractions and things outside of what’s important to me affect me and my training and stuff,” Namajunas said. “So I’ve just eliminated those distractions and I’ve really just been focused on my first love and that’s martial arts, and it’s done wonderful things for me. So yeah, I’ve definitely found the love, the passion, and love in life again.”

To reach that next level where she’s ready to go now, Namajunas faces one of her toughest challenges since Esparza in Kowalkiewicz, an undefeated professional who has been skyrocketing up the strawweight charts herself since her UFC debut last December.

Namajunas has adjusted her training camp in response – increasing the amount of sparring with high-caliber boxers that is helping her not only in this fight, but to reach that next elite level of the sport.

“I don’t think I’ve reached my peak yet, but I’m getting pretty close to it,” Namajunas said. “I think you’re going to see me evolve a lot more even in the future.

“I feel phenomenal. I’m going to be the most excited that I’ve been for a fight ever. I’ve been training really hard, everything is going according to plan and in my training I feel like I’ve made a lot of breakthroughs and stuff. It’s been cool.”