UFC women’s strawweight champion Rose Namajunas didn’t grow up determined to one day become a prizefighter and a world titleholder.

“It’s always been my lifelong dream to be a farmer, ever since I was a little girl,” said Namajunas, who was undoubtedly the only one in her class to come back with that response when asked what she wanted to be when she grew up.

“I was the only kid in the class that came to school wearing a rabbit vest,” she laughs. “I was the only one eating cottage cheese, sauerkraut and weird s**t. I was always the nerd growing up, but nobody messed with me.”

How does farming, rabbit vests and sauerkraut play in to Namajunas’ first title defense against the woman she defeated for the belt last November, Joanna Jedrzejczyk? They don’t, but that’s a part of the charm of the 25-year-old, who is clearly at ease before Saturday’s UFC 223 co-main event. 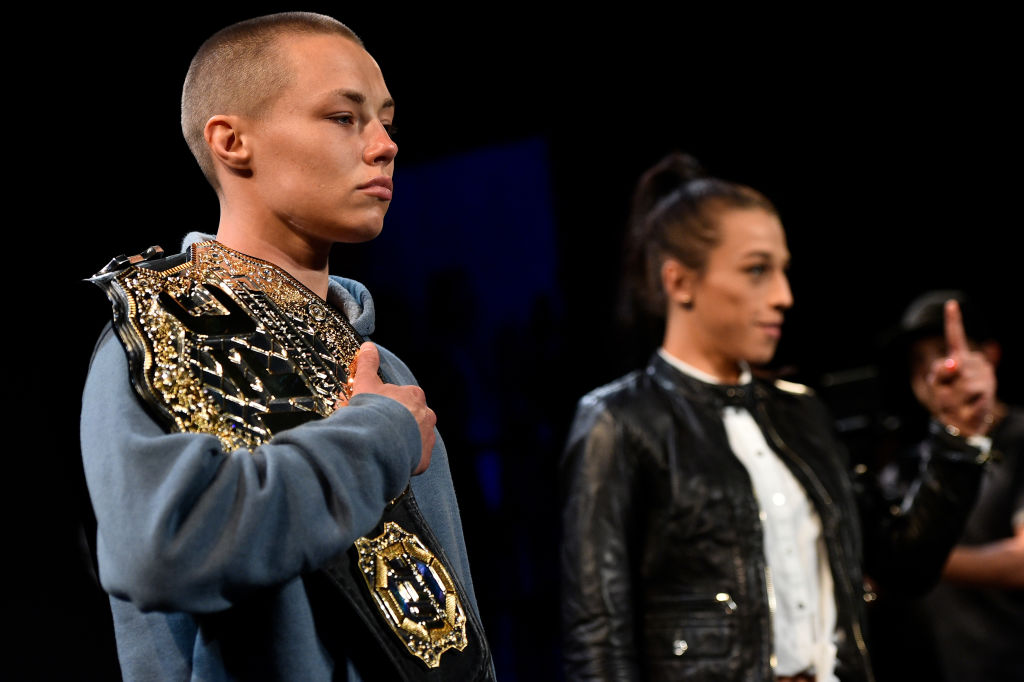 Despite the pressure that goes along with trying to repeat her win over Jedrzejczyk, Namajunas doesn’t have to be in fight mode all the time. She’ll save that for when it’s time to throw punches. In the meantime, she’s just Rose, and what happened in Madison Square Garden five months ago has no bearing on what takes place in Barclays Center this weekend.

“Just letting go of the past and being in the present moment, that’s the best thing that you can do, knowing that situation is behind me,” she said. “I’ve been in multiple highs of highs and lows of lows, so if I took every one of those experiences with me all the time, I’d be a very tired individual. (Laughs) So I draw from those experiences when I need some type of extra push or some type of reminder, but I definitely try and stay in the present moment and that’s the best way to make yourself feel energized and ready for whatever comes. Obviously, April 7th is coming, there’s nothing we can change about that. But I can do what I can today and make sure I make the most of it.”

That means embracing her role as champion and enjoying life at the top, even though she didn’t get much time to do so before the rematch with Jedrzejczyk was signed, sealed and delivered. And even after a decisive finish of the Polish star, Namajunas isn’t letting the win get to her head.

“I’m enjoying every day, even the days that, on the surface, might not seem as enjoyable,” she said. “I’m just trying to enjoy every aspect of it - the good, the bad, the mediocre and okay days; all of it. I’m taking one day at a time and that’s really all I can do. Naturally, after you knock out one of the greatest fighters of all-time in the first round like that, it’s definitely important and vital to make sure you’re keeping yourself on a leash and not staying up in the clouds too much.”

That was probably a non-issue with “Thug” Rose, who has always had humility as one of her most potent weapons. Add in her stellar ground game and the underrated standup attack that ended Jedrzejczyk’s long reign, and Namajunas has the potential to be on top for a while.

“I don’t know what a while is,” she said. “I always take one fight at a time, so as far as a while is concerned, I have no idea. I’ve never defended a title before or been the champion before. Obviously, my mindset (before the first fight) was, ‘I’m the champion going into this,’ and I had to believe it. But I hadn’t really thought past that. Right now, my main concern is being champion for this year. That’s my own personal goal, and at the same time, I’m really looking forward to another fight. I don’t have experience in defending my title, but I do have a helluva lot of experience in fighting, so I’m just excited for it.”

If you weren’t a Namajunas fan before her magic moment in New York City, her post-fight interview likely did the trick, making it one of those rare occasions where, at least for one night, everyone was on the “Thug Rose” bandwagon. She appreciates such support, but it’s the support from her inner circle that really matters, and as long as she has that, she’s just fine.

“I’m always used to people thinking that I’m kind of weird,” she laughs. “I’m used to being kind of a weirdo or nerd sometimes, but at the same time, I’ve always been everybody’s friend. So I’ve always been the life of the party, but I try not to get too wrapped up in concerning myself with other people’s feelings towards me, just because I think people confuse what they think they like. One minute you’re adored and the next you’re not, but really, the people that matter the most are the people that are closest to me that I see on a day to day basis and are the ones that get me into the Octagon and are behind me the whole way.”

There will be more fans after Saturday, and in the fight after that and so on and so on. But eventually, it will be time to move on, which brings us back to farming.

“That’s going to be my next step after fighting, venturing out into urban farming, trying to get the youth and city development areas involved in more gardening and knowledge about the earth and nature and things like that,” she said. “And I’m going to incorporate martial arts in that way as well. I think it will be a healthy balance of a post-fight career.”

Don’t get scared, though. She’s not ready to grab her farming tools just yet.

“There are other things to life and I think it’s very important for fighters to have other interests. It’s healthy. At the same time, this is the most awesome, incredible job ever and this is cool. It’s got its downsides, but you’ve got to enjoy the small window while it’s open.”

That window is wide open right now, and she’s going to take advantage of it, with the next opportunity coming this Saturday in Brooklyn. It’s going to be another tough challenge as she gets ready for an opponent determined to get the belt back, but Namajunas isn’t concerned with anyone but the one in the mirror.

“The only thing that I can control is me and my emotions,” she said. “And as long as I have them in control, I really can’t see anybody on the distant horizon that can mess with me at the moment. I know that every dog has its day and I’m not the perfect fighter and the perfect specimen, but man, I’m pretty f**king good and I’m good at this fighting s**t. I just have to be in control of myself.”