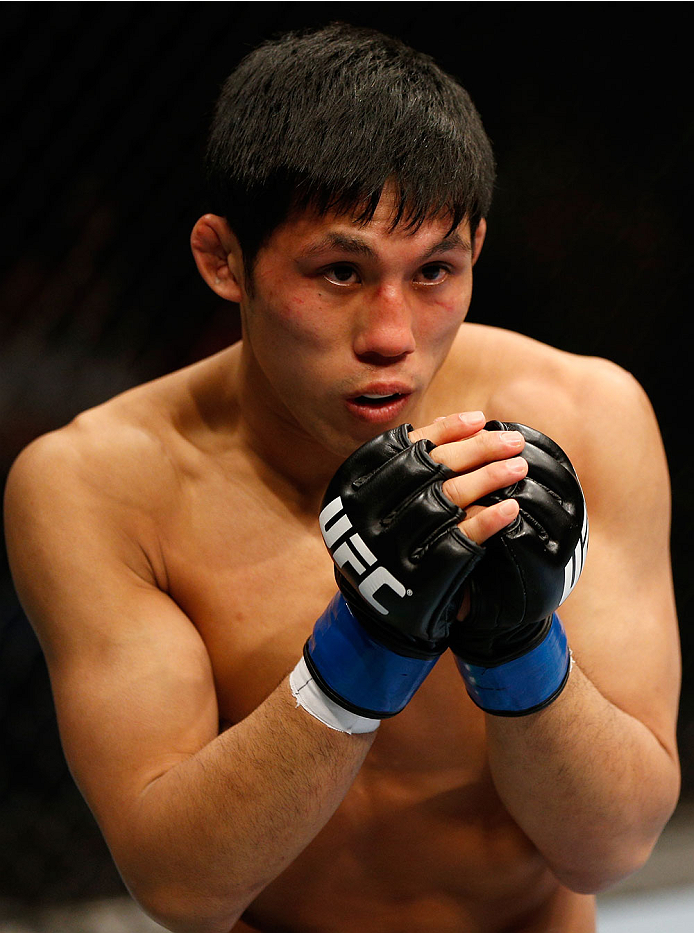 There are numerous ways to judge a fighter’s success or lack thereof in mixed martial arts. Where wins and losses ultimately dictate the route traveled and provide either the keys to a championship opportunity or the unpleasant turn of exiting the sport’s biggest stage, there is something to be said about a fighter who delivers on every occasion regardless of the outcome.

Fans want to follow the trajectory of a rising star just as much as they want to root for the underdog they have been supporting for years. That said, the fighting faithful also enjoy tuning in to watch a combatant who has earned their scrappy reputation give their all for three rounds inside the Octagon. Not every bout is going to have a title on the line, but when there is a name on the card who has put on memorable performances in the past, fans are going to do their damndest to make sure they don’t miss the next one.

Nam Phan made his introduction to the UFC fan base on the 12th season of The Ultimate Fighter in 2010, and more than three years and seven fights under the UFC banner later, the southern California-based fighter is still going strong. While his record over that stretch isn’t exactly what he had hoped for (2-5), the Vietnamese fighter has endured because of his ability to bring the ruckus every time out. That said, there is no way to deny that weaving in and out of the loss column creates added pressure, but Phan does his best to block out that energy and remain focused on the road ahead.

“Every fight for me is do or die,” Phan said. “Every fight in the UFC comes with pressure and I don’t put any additional or extra pressure on myself by worrying if the next fight is a ‘do or die’ situation. I just try to focus on the task at hand and deal with the fight when the time to fight comes. I try to go out there and give it my all and hope I do my job good enough to get invited back to fight again.”

Fortunately for Phan, those invites continue to come and he’s been able to leave his mark on the majority of those nights in the cage. His two memorable Fight of the Night-earning battles with Leonard Garcia were each shows topping affairs. After suffering a highly questionable split decision loss in their first go around, the California transplant was able to make good in his second effort by earning a clear unanimous decision victory over the “Bad Boy” in the rematch.

Nevertheless, victories inside the Octagon are never easy to come by, and Phan has had to make adjustments along the way. After dropping two out of three showings in the featherweight division, he decided to drop down and try his hand in bantamweight waters. For his 135-pound debut he was greeted by savvy veteran Takeya Mizugaki in a bout that was figured to be an action-packed tilt from start to finish. The fight absolutely lived up to expectations, as both men engaged in a hard-fought affair with Mizugaki taking the unanimous decision upon the conclusion.

“There were definitely positives I took away from that fight,” Phan said. “Mizugaki is one of the guys in the top 10 and I thought I gave him a good fight. I proved I could hang with one of the top dogs in the bantamweight division.”

While the loss in Brisbane put him on a two-fight skid, Phan refused to let it to sink his spirits. He fought his heart out against Mizugaki and was determined to turn the ship around in his next outing. When the phone call came from the UFC offering him Vaughan Lee at Fight Night: Kim vs. Hathaway in Macao, his focus immediately shifted to defeating the scrappy Brit.

“It’s a tough matchup,” Phan explained. “He’s a tough guy to prepare for. He’s very athletic and elusive. He’s almost like a smaller version of Lyoto Machida with how elusive he is. His style is very explosive and I’m going to go out there and do my best to beat him.”

The bout with Lee will mark his second showing in the bantamweight fold and Phan has few worries when it comes to making the weight limit for their upcoming tilt. Yet, with the bout taking place in Macao, taking a flight to the other side of the globe during the weight cutting process can be a tricky experience. Fortunately for Phan, he fought in Japan on several occasions and has some experience in that particular department, which he believes will make his upcoming cut that much easier.

“I have fought a few times in Japan and have some experience when it comes to cutting weight in a situation like this,” Phan said. “Before I go I make sure to get my weight down as low as possible and that is what I’ll do before I leave for Macao. Another big part of it is to make sure I bring my own food and only drink water. I also make sure I don’t eat any food on the airplane during the flight over. Those are little things you have to do but they make a big difference.”

Another added bonus for Phan in this fight has more to do with where the bout is taking place than anything that could happen inside the Octagon. As a fighter of Vietnamese decent, being able to fight in Asia means a great deal to him, but even more so with the bout taking place under the UFC banner. The organization’s push for global expansion in recent years has created a tremendous amount of opportunity for fighters from every corner of the world, and Phan is excited to be a part of the process.

That said, being on the card for the UFC’s return to Macao is a dream opportunity for him and he intends to make the most of it on Saturday.

“It’s great, man,” Phan said. “I’ve always wanted to fight for the UFC on a card in Asia. This is like one of my biggest dreams coming true. Getting to fight on any UFC card is a big deal, but fighting on one that is taking place in Asia is the best thing I could hope for. It’s honestly a dream come true.”