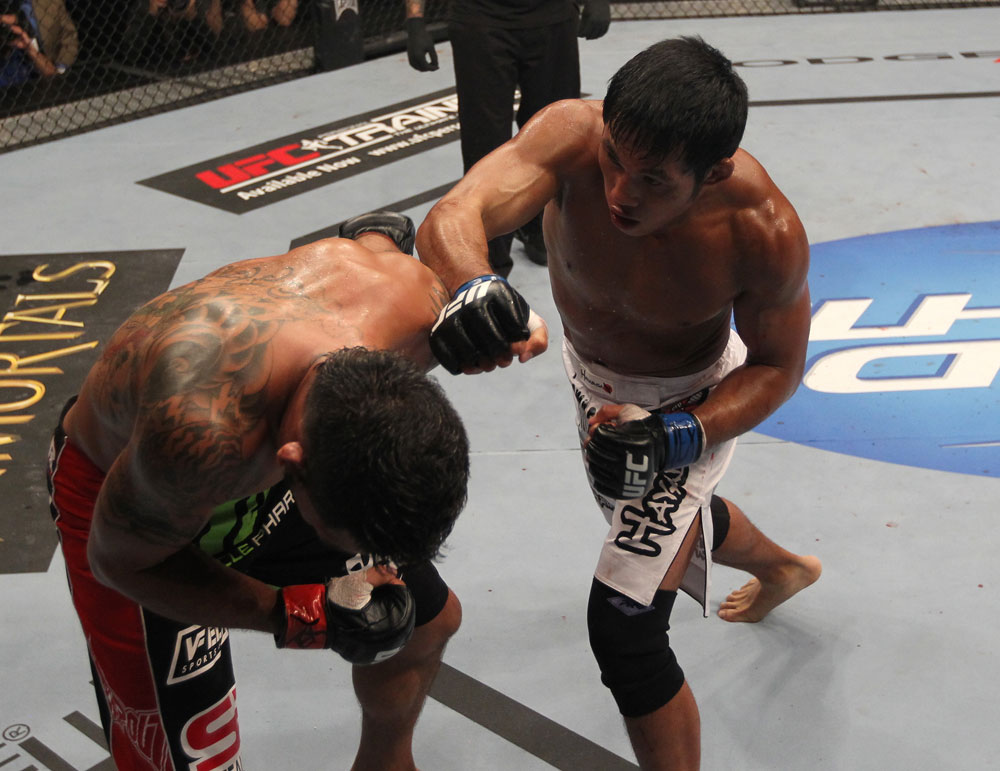 Until our 20-minute conversation last week, I hadn’t crossed paths with Nam Phan in nearly a decade. Memory lane made us revisit a chance encounter that occurred long before I started working for the UFC and back when Phan was merely a rookie pro in mixed martial arts.

From the other end of the phone line, Phan initially briefed me on his most recent preparations for unbeaten Jimy Hettes and how he, raised by Vietnamese parents, relishes Pho but often deprives his taste buds of the heavenly (but carbohydrate-heavy) soup to make the featherweight limit. We talked about his MMA school in Orange County, California, and how he earned his black belt under Rick Estrada.

“No one really knows that I know jiu-jitsu,” said Phan (17-10), who has TKO’d four opponents in the past five years but only submitted one over that same span. “They think of me more as a boxer now, I guess. I was very heavy in the jiu-jitsu circuit but lately I’ve moved toward the UFC. But jiu-jitsu was a big passion of mine.”

I can personally vouch for this. When the widely feared Y2K computer glitches failed to materialize or end the world at the turn of the new millennium, I decided to spice up my life and give Brazilian jiu-jitsu a try. I was living in Utah at the time, working as a general assignment reporter for the Salt Lake Tribune. I began training under Pedro Sauer, a Rickson Gracie black belt who was a former race car driver and stockbroker who became something of a local cult hero after beating up a 250-pound Mr. Utah bodybuilder who had called him out.

For my second BJJ tournament, as a white belt, I made the 10-hour trek to Southern California.

“Ah, King of the Hill!” Phan said, instantly recalling the name of the tournament.

Yep, King of the Hill, a tourney hosted by BJJ pioneer Rigan Machado. BJJ whiz and MMA veteran Javier Vazquez competed in an advanced division. There were also Division I wrestlers in the mix, and a purple belt named Dave Phillips who drove down with me (and later fought professionally). Long story short, I competed in a bracket with 17 or 18 guys, a combination of white and blue belts. I had five matches that day. One of my foes was a stocky Asian who stood out for his tree trunk legs and a laissez faire coolness before matches. After years of wrestling, intensity and aggression defined my pre-match warmups. Phan was joking and smiling with teammates before our match; I was psyching myself up as if he had deserved payback for something he said.

We took to the mat and shook hands. Phan was heavier but I was the superior wrestler. I shot a double leg, got excellent penetration and picked him up. By the time we hit the mat Phan had swiftly locked in on my right arm like a pit bull in a fight. Unable to get my arm back, and demonstrating my white beltness, I did exactly what you should not when trapped in a tight armbar: I stood up. Only I am not Rampage Jackson. Phan, all 155 or 160 pounds of him, was literally hanging from my right arm, cranking away with all his might, his thighs forming a visegrip on my limb. Blinded by adrenaline and pride, my stubborn instincts prevailed. I didn’t want to tap. That’s when the loud popping sounds started, signaling the onset of torn ligaments as my arm bent well beyond its intended range. Still, I refused to tap and Phan hung from my arm, until the referee had heard and seen enough. He stopped the match and declared Phan the winner.

“I remember!” Phan said of the experience.

Phan went on to win first place in the tournament, submitting all of his opponents. My elbow swelled considerably. I spent the long drive home and the next few days icing it incessantly. It was roughly two months before I regained normal use of my right arm, and even then some pain and swelling remained for many months thereafter. So I never forgot the name Nam Phan, the man who taught me the value of tapping and swallowing your pride. And the man who forced me to learn how to correctly defend an armbar.

Every time I competed in a no-gi tournament in California, Phan was there, usually finishing at the top of the podium in a heavier weight class. In the early 2000s, he was a super-dangerous submission artist.

“Kneebar was my favorite submission back then,” Phan said. “I love kneebars.”

Phan’s decorated grappling past is not as well known outside of California. The heavy-handed featherweight has developed a penchant for action-packed standup fights. Quite the contrast to his UFC 141 opponent, Pennsylvania’s Hettes (9-0).

“Jimy Hettes reminds me of myself five years ago,” Phan said. “I used to be so good that I would just submit everyone. But the reality is, you don’t submit everyone. And sometimes you will take a beating on your back! So you have to adapt. If you’re on bottom then you’re losing in MMA, so you have to change it up. I had to get my striking and wrestling better and be smarter. You know, I want my brain to last. After I’m done with fighting I want to be able to talk to my kids, I want to still know how to spell my name.”

Coming off the biggest win of his career – a decision over Leonard Garcia that avenged a highly controversial loss – Phan wants to close out 2011 with a bang. Exposure from being a semi-finalist on The Ultimate Fighter 12 and bouts with Garcia and Mike Brown have made him much more recognizable around town. But to sustain that clout, he must keep winning. And he might need to dust off those once-lofty Brazilian jiu-jitsu skills to beat Hettes.

But from the sound of things, Phan has other ideas.

“I’ve got to bring constant pressure and put a pounding on this kid,” he said.