"You can always expect high-paced action from me. I never stop bringing it and I never give up." - Nam Phan 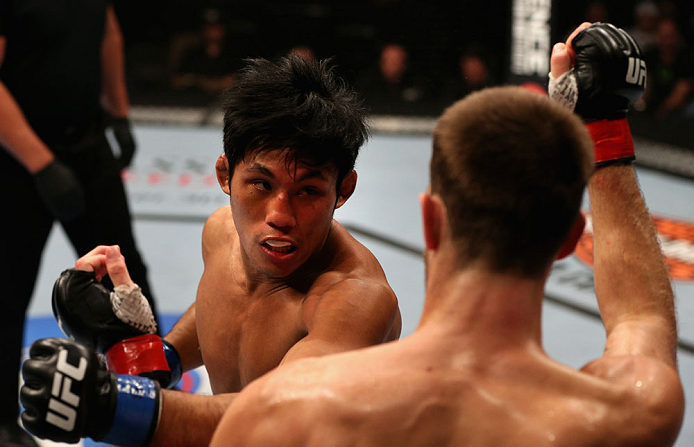 Nam Phan’s UFC run hasn’t been easy, but despite a 2-4 slate since coming off season 12 of The Ultimate Fighter, the Californian hasn’t lost his sense of humor, as evidenced by his explanation why he’s been on the shelf since a December 2012 loss to Dennis Siver.

“I think after my last fight with Dennis Siver, he jacked me up and the UFC started thinking ‘you know what Nam, you suck, and you probably need some time to improve,’” he deadpans. “And I guess that’s what they gave me. You know, they didn’t say that, but that’s what I took from it. You better improve or we’ll cut you.”

Sometimes that’s all it takes. So in between the usual aches, pains, and injuries that come with being a professional fighters, the 30-year-old Phan went back to the woodshed, not only upping his game, but deciding that when he returned, he would do so ten pounds lighter as a bantamweight.

“After the Dennis Siver fight, I did some hard thinking,” he said. “And after the UFC started cutting guys fast, I saw my inconsistency in the featherweight division and I thought to myself ‘maybe I can give it a try.’ People very close to me said I should give it a try at bantamweight. I like food, I didn’t want to give it up, but I decided to do it. I said I’ll take it more seriously, I’ll give it one last shot at bantamweight, super serious, eating super clean, and go for a title shot.”

On Friday night (Saturday in Australia), Phan will begin that next chapter of his career against surging contender Takeya Mizugaki, who has won three straight.

The bout with Mizugaki is definitely an intriguing fight on paper, and it shows that the UFC is confident enough in Phan to put him in with someone like Mizugaki in his first bantamweight bout. Or it could be something else, jokes the Fountain Valley native.

“You could look at it as they have a lot of confidence in me or they really don’t like me,” he said. “‘Nam Phan, he’s our guy, he puts on a show,’ or ‘I don’t like him that much, let’s give him to Mizugaki.’ (Laughs) Either way you look at it, you’re gonna see some fireworks.”

It’s not the light-hearted banter you expect from someone who has fought at lightweight before and who is now preparing to drop to 135 pounds for the first time. But Phan readily admits that in the time leading up to his weight cut, he feels better than ever.

“I feel much more healthy, I’m happy, and that’s great,” he said. “At ‘45 I was always very confident that I’d make ‘45 and so I ate some bad food. But now I’m eating super clean all the time. I thought I was going to go crazy dying for some great, delicious tasty food all the time, but I don’t crave it that much anymore, and I feel much stronger, much more alive, and I have much more energy.”

He also has a new lease on a career that began back in 2001.

“I’m definitely excited, and I appreciate that I have a new weight class,” he said. “This is a new chapter in my life, and let’s see what happens. I’m going to be either really happy or really disappointed.”

There’s the jokester again, but Phan makes it clear that on fight night, he remains all business.

“You can always expect high-paced action from me,” he said. “I never stop bringing it and I never give up.”