Nakamura among winners in prelims 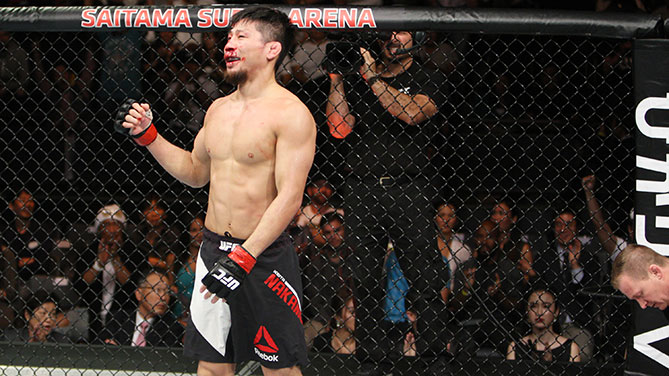 In his first UFC bout since 2008, Keita Nakamura reintroduced himself to the Octagon faithful in unforgettable fashion Saturday at Saitama Super Arena in Japan, pulling out a third-round submission win over Li Jingliang in an action-packed welterweight battle.

Both fighters came out swinging to start the bout, with Nakamura winning the opening skirmish by knocking Jingliang down with a left hand. The Beijing product cleared his head immediately and looked for a submission from his back, but Nakamura avoided any trouble and kept his foe grounded until a restart by referee Neil Swailes in the final minute. In those closing moments, the slugging of the early part of the fight resumed, Nakamura again landing the harder and more accurate shots.

Jingliang’s striking was much sharper in round two, and he was tagging Nakamura with everything he threw to the head and body. With two minutes left Nakamura looked exhausted, and Jingliang sensed it, upping his work rate and dropping his foe with a left hand. The bloodied Nakamura took a bunch of hard ground strikes, but he was able to get back to his feet and make it to the end of the round.

In the third, the tired warriors went after it on the feet before they traded takedown attempts, and while it looked like Jingliang had sprawled out of trouble as Nakamura shot, the Tokyo product suddenly reversed tact and took Jingliang’s back. Jingliang rose to his feet with Nakamura locked on, but the rear naked choke Nakamura sunk in was too deep. And as Jingliang fell back to the mat, Swailes stepped in, halting the bout at the 2:17 mark. 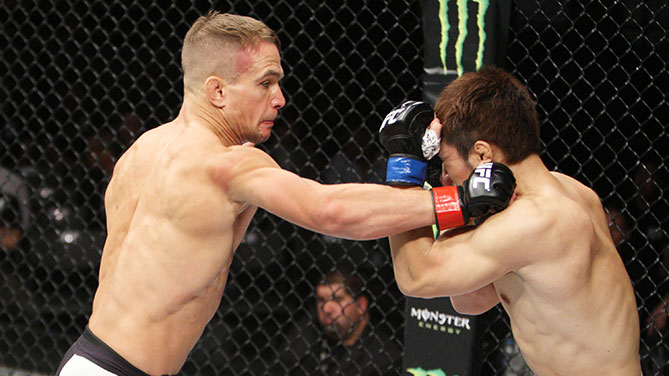 In a lightweight bout, Germany’s Nick Hein put together a workmanlike effort in taking a close, but unanimous, decision win over Octagon debutant Yusuke Kasuya.

Kasuya got off to an impressively fast start, but that momentum was put to a quick and emphatic end when a Hein knee at close range landed low and put the newcomer on the deck for nearly five minutes. Once the bout resumed, the pace slowed, with both fighters doing their share of scoring in spurts.

Hein was able to get more comfortable in the next two frames, with his left hand being his primary weapon as he repeatedly caught the Kanagawa product with it, and while Kasuya was never out of the fight, he was also never able to kick it into another gear to get ahead and pull away. 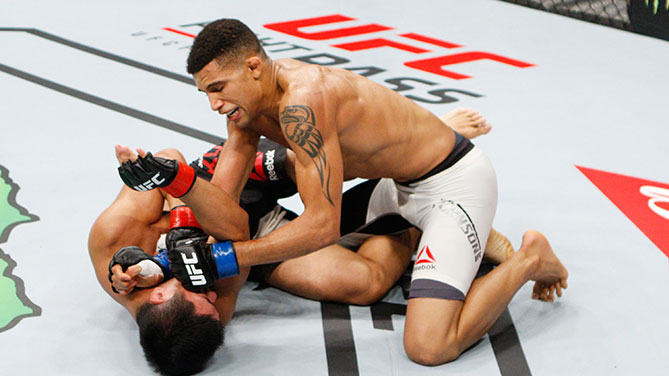 Johnson fought brilliantly in the first round, sticking and moving while keeping Kotani seemingly stuck in mud as he pursued. The Japanese fighter did attempt one takedown, but Johnson turned it away and made the big score of the round with a right hand that staggered Kotani midway through the frame.

In the second minute of round two, Johnson’s right hand landed again, this time putting Kotani on the deck, but after a barrage of ground strikes, the Kanagawa native was able to shake off the cobwebs and rise to his feet. Halfway through the round, Kotani moved in aggressively but ate a knee that put him down a second time. Again, the gutsy veteran rose only to visit the canvas once more before the horn sounded.

Kotani came alive in the final round, landing some punches before putting Johnson on his back in the second minute. Kotani did some solid work on the mat, but as the fighters traded leg lock attempts with under two minutes left, it allowed Johnson to get up to his feet and out of trouble. 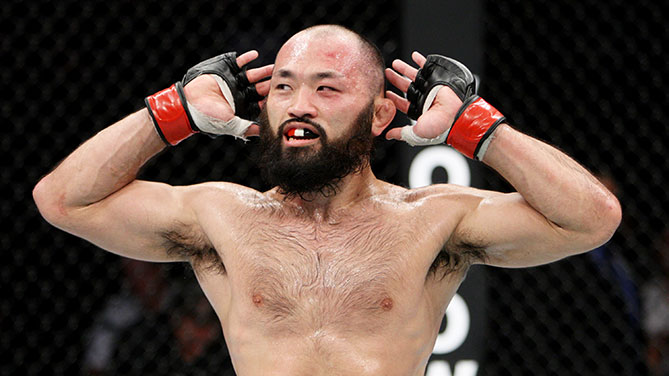 Japan’s Shinsho Anzai was on his way to a decision win over Roger Zapata in the welterweight opener, but he got a TKO victory instead when an injury to the former Ultimate Fighter competitor ended the bout in the final round.

There was little in the way of significant action in the opening frame, but a takedown by Anzai (9-2) 90 seconds in was probably enough to win him the round, despite a very late charge by Zapata.

Zapata’s striking had Anzai seeking a takedown or tie-up at every turn, and the Tokyo product was able to down the New Yorker twice in the first half of round two. Zapata (4-3) looked for a guillotine choke from the bottom, yet he came up short, allowing Anzai to control the pace of the fight. Once standing, the two continued to maul each other against the fence.

The most compelling action of the bout was also what ended it. Early in round three, an exchange saw Zapata turn his back and grab his left hand after landing it on Anzai’s head. In the ensuing confusion, referee Neil Swailes stepped in and took Zapata to see the Octagonside physician. The bout was then halted at the 47-second mark due to injury.

"I broke my middle finger and turned around to gain my composure,” Zapata said. “I didn't make any noises and Shinzo landed 3 punches and then the ref stepped in and called for the doctor.  The doctor said I could continue fighting but then the ref was like it's over.  It wasn't like he was landing brutal punches as I had my back turned and I was planning on coming back and connecting for one handed knock out.  I was trying to give the fans an exciting fight."