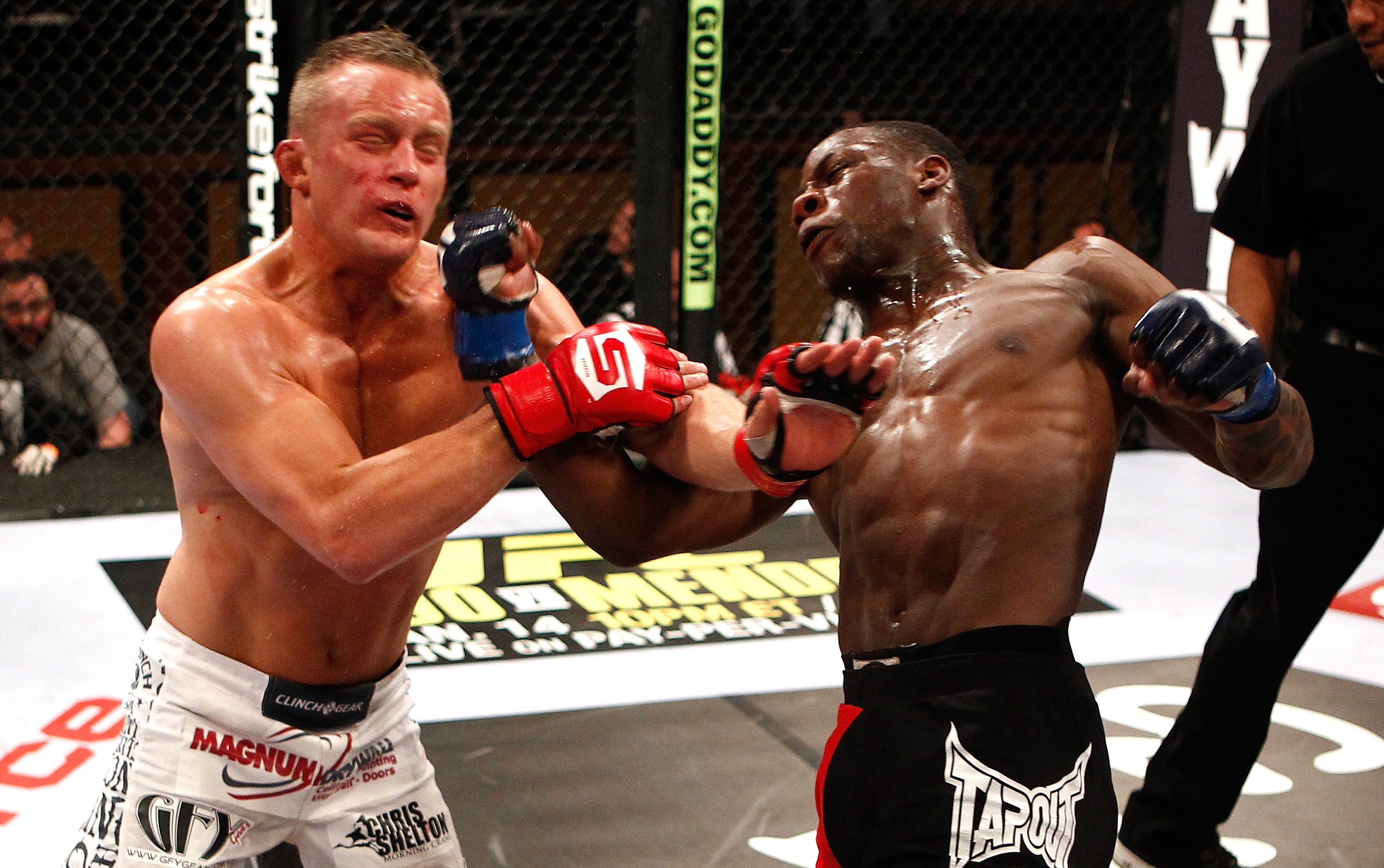 When light heavyweight boxer Eric Harding rose from a knockdown in his 2002 bout with Antonio Tarver, referee Bill Page looked him in the eyes and asked if he was all right to continue. Harding, almost disdainfully, responded immediately.

As Harding told me later, “The average guy on the street wouldn’t understand. To a fighter from Philadelphia, it means everything.  It means pride, it means heart, it means that ‘never give up’ attitude.  It’s not over till it’s over.  You have to take me out or I’m gonna die right here in this ring.  This is everything to a Philadelphia fighter.”

Strikeforce welterweight prospect Nah-Shon Burrell is a Philadelphia fighter. And when I recounted this story to him, he related to every bit of it while also adding a mixed martial arts twist to it.

“We got a chip on our shoulder out here,” he said. “Not a lot of people take us seriously. We don’t have a lot of good wrestling gyms or big MMA gyms out here, so when you hear that you’re fighting somebody from Philly, you think, what’s out there, who do they have, he must be corny. That’s how I feel about it, so every time I leave Philly, I’m putting Philly on my back.”

This Saturday, Burrell will be bringing that Philly chip to the HP Pavilion in San Jose, California for a Strikeforce main card bout against Chris Spang. Originally scheduled to face veteran Bobby Voelker, an injury left the Kansas native on the shelf, opening the door for the 4-1 Spang, a product of Sweden now making his home in Las Vegas. For Burrell, who has received a crash course in the fight fame since turning pro in 2010, it’s part of the gig.

“I train so hard, it don’t really matter,” he said of the opponent switch. “I’m just ready to fight whoever.”

That approach has served him well thus far, as he’s won eight of nine pro bouts, finishing six by knockout. Three of those wins have come in Strikeforce, and his raw talent is evident. In fact, his toughest opponent thus far has been the scale, as he’s required extra time to make weight in his last two bouts. Considering that he jumped from the couch watching Anderson Silva fights into the gym, that doesn’t come as a shocker, but he’s finally starting to get the hang of the weight cutting process.

“It’s coming along,” he said. “I can get down, it’s just regulating my weight now. It’s kinda hard because I walk around at 205, so I’m trying to stay down to 195 to make the cut easier. That’s the only problem, the walking around weight.”

It’s an even bigger problem living in the Cheesesteak capital of the world.

“I gotta lot of distractions and a lot of spots that I can go to,” he laughs.

Yet even with this issue, Burrell, just 22, has shown the potential to take this fighting career of his as far as it can go. And if he does get crowned champion one day, we may look back at January 7, 2012 as the day “The Rock n Rolla” grew up, even though he still hasn’t fully come to grips with his ultra-close three round split decision win over James Terry.

“It was just bad,” he said. “There were a lot of bad things going into that fight, and nothing went right. That’s why I’m trying to use this fight coming up to show that I belong in Strikeforce. A lot of people think I lost and you can’t think somebody lost if you’re knocking people out, and that’s what I’m gonna have to get back to. I’m gonna have to keep finishing fights.”

Sometimes things just don’t go your way and you don’t deliver the performance you expect to. Burrell wasn’t in top form against Terry, but what impressed was the Philly native’s attempt to turn things around in the final five minutes, as he left everything in the cage in search of the knockout. It was a gut check for him, and he passed the test. Don’t tell that to this perfectionist.

“I watched the fight over and over, and it hurts my stomach. I don’t like when people don’t like my performance.”

He will admit he learned from the experience though.

“It helped a lot. It turned my training up a helluva lot.”

Working with Tuan Pham and his regular crew at The Fight Firm in the city of brotherly love, Burrell has also supplemented his training over the past year by working with UFC vet John “Doomsday” Howard as well as the Bombsquad team.

“I definitely like traveling to other gyms and sampling what everybody has to offer, because you can’t just stay in one spot, then you’ll become stale,” he said. “I went to Boston recently and learned some stuff up there with Doomsday and his team. I also trained with the Bombsquad, and I bounce around, but Philly will always be my home.”

It’s a whirlwind right now for Burrell, who is getting a sampling of life on the big stage, where every win is analyzed and every mistake is magnified. He appears to be taking it in stride though, and if you want to look past him because of his youth and relative inexperience, that’s at your own peril.

“Not a lot of people take you seriously when you’re young,” he said. “They think you haven’t put enough time in to learn enough things, and a lot of times you’re overlooked, and that’s an advantage off the bat because every day all day, I’m studying something, I’m training something, and I’m doing something to help progress me further in my career. I came into the sport with nothing, so I had to learn everything at the same time. Any new tools I can pick up, I’m down for learning. I’m young and hungry.”