Nadia Kassem Plans To End 2019 With A Win

With injuries finally behind her, Kassem believes that UFC 243 is her chance to get back on track.
By Thomas Gerbasi, on Twitter: @TGerbasi • Oct. 2, 2019

The reality of performing in front of over 55,000 fans could be the type of thing to break a fighter who isn’t used to such situations. And who is? But as flyweight prospect Nadia Kassem approaches her UFC 243 bout against Ji Yeon Kim at Marvel Stadium in Melbourne, it really is just another fight.

“I think maybe because it's another Aussie card, it's nothing big for me,” said the New South Wales native. “It’s cool and amazing, but it doesn't stun me, if that makes sense. I feel like if the biggest attendance was in Vegas and I was on a Vegas card, I'd be blown away, but since I'm on home turf, it's a comfort thing.”

If Kassem has proved anything in her 23 years on this Earth, it’s that her comfort zone is most certainly in the middle of a fistfight. That cool in the heat of battle has earned her a 5-1 pro MMA record that includes four first-round knockout wins and a victory over Alex Chambers in her UFC debut in 2017, as well as compliments as the Aussie Diaz sister.

She appreciates such kind words, but also knows that there are detractors as well, especially after she suffered her first loss against Montana De La Rosa in her most recent bout in February. So she doesn’t take the praise or the criticism to heart.

“I do hear the hype and everything,” she said. “There are people that hype and other people who are like, 'She doesn't belong in the UFC after her last fight, blah, blah, blah.' There are two views of it and it doesn't matter. Either way, I'm gonna turn up and perform.” 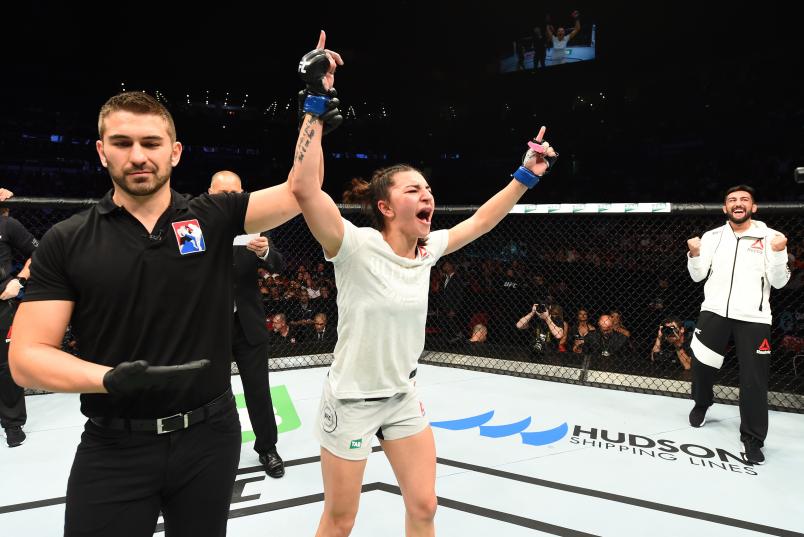 Nadia Kassem celebrates her victory over Alex Chambers of Australia in their women's strawweight bout during the UFC Fight Night event inside the Qudos Bank Arena on November 19, 2017 in Sydney, Australia. (Photo by Josh Hedges/Zuffa LLC via Get

Diaz-esque indeed, but unfortunately, injuries have kept Kassem from truly showing what she can do, the most recent being a torn MCL in her elbow suffered in the De La Rosa fight.

“After that happened and I rehabbed, I still tried to work around it,” she said. “I would do lower body training only and strength and conditioning and I was just trying to get healthy, then eventually make my way back into the gym and do proper MMA. I was eager to get back in there. Sure it was a big knock and I was embarrassed the way she had taken me out and I didn't do any damage, but it was definitely a learning experience for me and it was a blessing in disguise, as my coach would say.”

Kassem wouldn’t say such things, as she’s the type that wants to deal with a loss by fighting again and winning as soon as possible. She didn’t get that opportunity after her bout in February, but she’s got her chance against a fighter in Kim who isn’t a jiu-jitsu specialist like De La Rosa or Chambers. Instead, “Firefist” may very well trade with Kassem this weekend.

“I'm not saying I'm overly comfortable because you still don't know what they're gonna throw at you, but I do feel a bit happier that I can do some more standup stuff because that is what I'm more about,” said Kassem, who has three wins in 26 seconds or less, backing up her modest claim that “standup stuff” is her thing. “I'm not the type of fighter to hold someone down and just grind. I'm happy to grind standing up and I feel like Kim will give me that and we can put on a good show for the fans.”

With a win, Kassem will right her ship and end 2019 on a high note. As for 2020, the former strawweight doesn’t foresee a move back to 115 pounds, but she won’t rule anything out.

“I'm still not sure what's happening,” she said of the weight class situation. “It's kind of hard in that sense, because I enjoy being able to enjoy my fight camp and learn and not have the massive focus on cardio and just trying to make weight. Skillwise, as a flyweight I can progress, but I'm not too sure if I can make straw again. I have to see. But I'm happy to build muscle and stay at flyweight. Obviously from my last performance it doesn't show, but I'm ready to show that the next time around. So I might not jump back to strawweight, but I'm really not sure.” 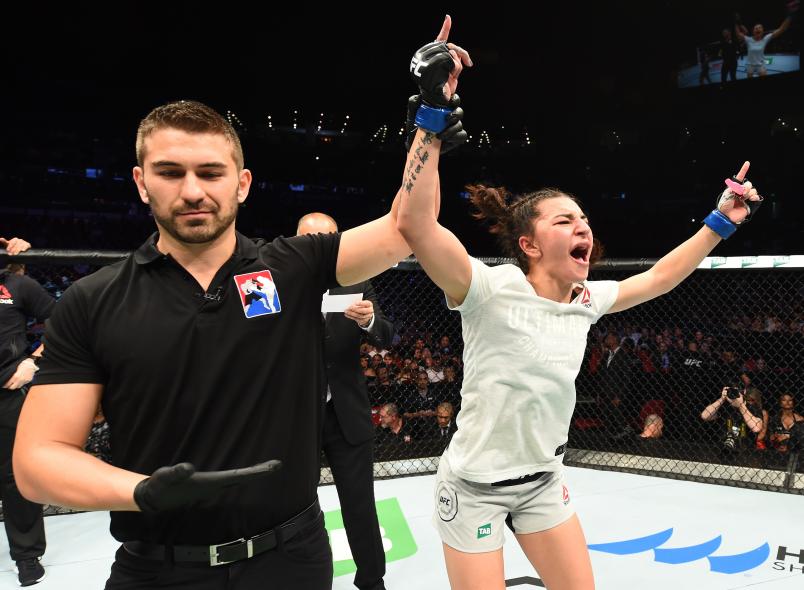 SYDNEY, AUSTRALIA - NOVEMBER 19: Nadia Kassem celebrates her victory over Alex Chambers of Australia in their women's strawweight bout during the UFC Fight Night event inside the Qudos Bank Arena on November 19, 2017 in Sydney, Australia. (Photo by Josh Hedges/Zuffa LLC/Zuffa LLC via Getty Images)

SYDNEY, AUSTRALIA - NOVEMBER 19: Nadia Kassem celebrates her victory over Alex Chambers of Australia in their women's strawweight bout during the UFC Fight Night event inside the Qudos Bank Arena on November 19, 2017 in Sydney, Australia. (Photo by Josh H

What she is sure of is that if she can stay off the injured list, we’ll be seeing a lot more of her next year.

“Of course you can't help injuries, but I feel like the way I've conditioned my body, I should be more active and be able to train more often and obviously fighting more often, but yeah, I definitely want to be fighting three to four times a year. That's ideal and in 2020 I hope that's the case. I'm excited to see where my career goes after this.”