Myles Jury: No Turning Back

"There's a price to pay for what you want out of life, but I'm willing to pay it." - Myles Jury 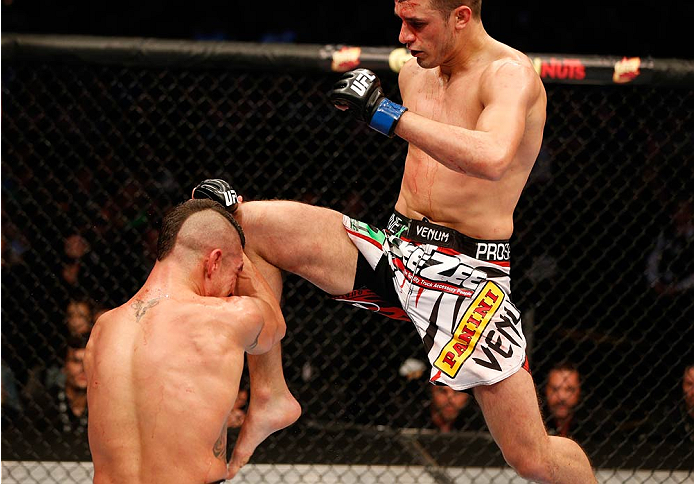 TOKYO, September 19 – If it is a noisemaker you seek, Myles Jury is not that guy. In a sports world where words often speak louder than actions, the unbeaten Michigan native has taken a different route, one that has led him to the most important fight of his career this Saturday against Takanori Gomi.

“Anytime you fight a legend like Takanori Gomi, it's a big deal, so coming off the injury and now getting the chance to fight somebody like Gomi, it's great,” Jury said. “I'm happy for the opportunity, and I'm excited for it.”

It’s typical understatement from the 25-year-old, one of the most affable and professional fighters in the UFC, and a young man intent on building a legacy based on performance, not hype. It’s almost fitting that this fight takes place in Saitama Super Arena, a place where the pageantry of the event was enjoyed, but that rarely took precedence over what happened on fight night. That’s a symbol not lost on Jury, a fan of both the UFC and Japan’s PRIDE during his formative years.

“When I was coming up, PRIDE and the UFC were kind of the founding organizations that were doing it big and having the big fights, and that's where all the top guys were at,” Jury said. “So growing up as a fan of the sport, I watched a lot of PRIDE and I watched a lot of UFC, and I always wanted to go out and compete in front of the Japanese audience and be on that stage in Japan.”

That stage is the one he’s been building toward through two stints on The Ultimate Fighter and 14 pro fights, and while the Gomi fight can rightfully be termed the biggest one of his career, we’ll be saying that about every bout he’s in from here on out. It’s the curse of being good at your craft, though Jury looks at the pressure and the pulls on his time from several different directions to be positive things.

“It does get overwhelming sometimes, but it's a good overwhelming,” he admits. “I get busy sometimes with my career, but when I look back on it, I'm so grateful for everything that I've been doing and all the opportunities that I've had. There's a price to pay for what you want out of life, but I'm willing to pay it.”

That means long hours in the Alliance MMA gym in San Diego, plenty of pre-fight interviews, and a life most 25-year-olds couldn’t fathom. But Jury likes being separate from the pack.

“I've always been big into personal development,” he said. “I have a belief that your mind and your emotions are very important in life and I feel like a lot of people mature physically in life but you have to be proactive to be able to mature mentally and emotionally. It's like the idea of self-mastery. I try to be as professional as I can. I take martial arts very seriously, and it's also a business. There are kids watching and a lot of people watching me at all times, and I want to be professional. I want to respect myself, my brand, my company, and that's what I do.”

In March, it was the first of what will be several crossroads fights for Jury, as he won a clear-cut three-round unanimous decision over longtime contender Diego Sanchez. It wasn’t a typical Sanchez barnburner, but by staying disciplined and refusing to engage in a brawl, Jury made the win look easy.

“It was a perfect style matchup for me and I definitely felt on point that night against Diego,” Jury said. “Especially after all the talking he did and everything he said he was gonna do, and to show up and beat him the way I did, I was happy with it.”

Beating Sanchez put Jury on the radar of more casual fans of the sport, a big development in any fighter’s career, and even as he was tasked with more pre-fight obligations than ever before, he handled it all with the ease of a seasoned – let’s say it again – professional. And as such, he knows that this is just the beginning if he keeps winning.

“I feel like people are definitely getting on board and catching up with everything I've been doing my whole career, so I feel excited about that, but there are more tests to be had,” he said. “It (the Sanchez bout) was one of those fights where it was either going to push me into that upper echelon of fighters or knock me back three or four fights. So it (winning) was definitely rewarding.”

The rewards will be greater each time he steps up and wins, and when you add in the fact that he’s also got that glossy “0” at the end of his record, Jury is at the point of no return. It’s daunting, but he likes it.

“I've won my fights and I've continued to grow as a fighter,” Jury said. “I've always had faith and confidence in myself, and though it definitely got rocky a couple times in my career, I always knew I was capable of being successful in the UFC, and it's awesome to make that a reality.”