"Every fight is a stepping stone and I just focus on the fight I have in
front of me." - Myles Jury 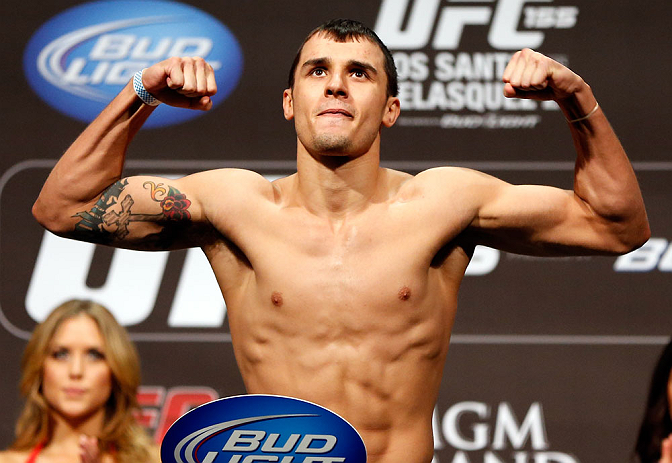 For up and coming competitors in the realm of combat sports, the search for the ever-elusive big break opportunity is an ongoing journey. Where talent allows the dream to exist and skill sets garner attention, the intangible element of timing is ultimately the key ingredient in the equation.

The right fight at the right time. The perfect performance when influential eyes just happened to be watching. Or seizing an opportunity which appeared from out of the ether but was capitalized upon as if it was a moment tailor-made to launch a career.

These moments are undoubtedly few and far between and rightfully so. But in mixed martial arts – and under the UFC banner specifically – the perfect platform to take the step from the unknown shadows of regional promotions to the sport’s biggest stage is the reality show tournament of The Ultimate Fighter.

While it is certainly possible to break out using other methods, The Ultimate Fighter is a proven vehicle. Competing on the show allows a fighter to not only showcase his talents, but provides the opportunity for an athlete to make a connection with a pre-existing fan base. A successful run in smaller promotions and solid record can earn a fighter the chance to fight inside the Octagon, but several weeks of prime time visibility and fans being able to follow a fighter’s progression into the UFC is a hard situation to trump.

That being said, earning a coveted spot on the reality program is difficult unto itself. With every new season, a storm of would be competitors come from all across the nation to try out for TUF, and once evaluations are completed, a small percentage are selected. Those who are chosen to compete on The Ultimate Fighter see the opportunity the chance of a lifetime and vow to make the most of such a unique situation because they fully understand the opportunity will never come around again.

This was the mindset of Myles Jury when he was selected to compete on the 13th season of The Ultimate Fighter. Strangely enough, the 24-year-old had the same thought process when he stepped in to compete on the 15th season as well, only this time with a greater sense of urgency.

After a knee injury forced him out of the tournament during his first stint on the program, Jury earned another opportunity to compete on The Ultimate Fighter. Unfortunately, “Fury” was unable to make good on his second effort, as he was eliminated by eventual finalist Al Iaquinta in his opening round bout.

Despite the setback, the Team Alliance Member was determined to make a home under the UFC banner. And when he was invited back to compete at the The Ultimate Fighter Live Finale against Chris Saunders, the make or break moment for Jury had finally arrived, and he seized the opportunity with vigor.

When the bell sounded, Jury put his foot on the gas pedal and hasn’t taken it off since. The San Diego-based fighter needed less than a round to submit Saunders and score his first official victory under the UFC banner, and then picked up more speed as he dominated fellow TUF alum Michael Johnson at UFC 155 this past December.

Coming into their tilt in Las Vegas, “The Menace” had picked up solid momentum and was making solid strides towards the top 10 of the ultra-competitive lightweight division. None of this meant anything to Jury as he steamrolled the Blackzilians-trained fighter in route to a lopsided unanimous decision victory.

With his undefeated record intact and the grumblings of a buzz beginning to grow around him, Jury set his sights on the next obstacle on his journey. That challenge will come this Saturday night against Ramsey Nijem at UFC on FOX 7 and Jury has every intention of keeping the ship rocking full-tilt-boogie in San Jose.

“Every fight is a stepping stone and I just focus on the fight I have in front of me,” Jury said, “Whether I beat someone with a big name or an opponent who hasn’t established a name at all – to me it doesn’t matter. I’m out here living my dream and I want to make sure I’m making the most of every opportunity. I’m fighting in the UFC and it’s hard to get wins in the UFC because the best competition fights here.

“I want to put on a good performance and getting the ‘W’ is what it is all about for me. I don’t worry about momentum. I want to show that I’m getting better with each fight and that the things I’m been working hard on are paying off for me.

“With that victory over Johnson I proved that I have the potential to win fights in dominant fashion,” Jury added. “I work hard, have a great team and I’m doing everything correctly to get big wins like that. To go out there and win that way pretty much puts it on paper and shows everybody I’m capable of getting it done. I always know what I can do inside my own mind but it’s pretty cool to go out there, put a stamp on it and show the world what I can do.”

With the next step of his journey coming against Ramsey this weekend, Jury will face another opponent on an upward trajectory. After coming up short in The Ultimate Fighter Season 13 Finale against Tony Ferguson, the 25-year-old has yet to revisit the loss column under the UFC banner.

The Pit-trained fighter has collected three consecutive victories and looked more impressive with each performance. The bout between Jury and Nijem will be a collision of two of the lightweight division’s brightest prospects, and Jury is amped to mix it up.

“It’s an exciting matchup,” Jury said. “I think Ramsey is underrated and he is a very dangerous opponent. I’m doing everything I can to prepare for him right now. I’m definitely taking him serious and this will be another opportunity for me to go out there and have fun. Hopefully I’ll get another win and just keep working my way up.

“I’m going to be having the time of my life out there and putting it all on the line like I always do. I go all in with my training and my lifestyle, but when I go out there to fight it’s like my craft or my art. I have no control over people liking or not liking my style, but one thing people are going to know is that I pour everything I have into this. I’m going into this fight and I’m going to throw everything I have into my performance.”

While a victory over Nijem is the primary goal in the here and now, the progression to become one of the best fighters in the world is the long term goal on the horizon. In order to accomplish this feat, Jury is fully aware that he must continue to grow and hone his skill set at a rapid pace in order to stay at the crest of the rising tide. That being said, the California transplant is staying ahead of the pack by pushing to keep his diverse skill set in constant progression. And when he steps into the Octagon, all the work and sacrifice put in will create a complex puzzle for his opponent to solve.

“Honestly it’s all kind of coming to a point,” Jury said. “I can strike. I can wrestle. I have jiu-jitsu and I can blend it all together to make a unique style. It changes with every fight. When I fought Saunders I felt my striking was going through the roof and when I fought Johnson it was my wrestling. With every fight it changes and I think that is what makes me difficult to prepare for because you don’t really know what style I’m going to bring. My style is constantly changing and evolving. It’s hard to find someone to mimic my style because it’s constantly changing.

“I’m honing my skills and getting better. As I get farther up the ladder and face better competition, that is where those little details are going to make all the difference. Those little things you do right can win you fights, but tiny mistakes can cost you fights as well. That is why I look at things one fight at a time. Each fight is an opportunity to progress my skills and gain experience so when I reach the top level of competition I will be fully prepared.”