Myles Jury: Holding Nothing Back

"I'm just a totally different beast than all those other guys and just all the guys in the lightweight division." - Myles Jury 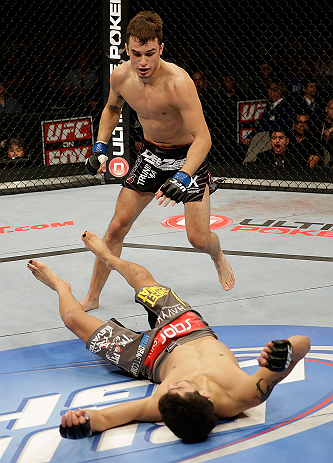 When the mainstream sports community takes notice of a highlight reel knockout - it’s got to be a good one. Such was the case with the aforementioned Jury and his one punch KO of The Ultimate Fighter 13 finalist Ramsey Nijem at UFC on FOX in April, which appeared on ESPN’s top 10 plays of the week.

“I heard it through the grapevine that it was on ESPN,” tells Jury. “I was like wow that's crazy! I watch ESPN, so seeing yourself in that is surreal. I got to showcase my striking skills and get the KO finish. I also got to represent myself and my company, which was an all around great scenario for us.”

As Nijem charged forward with a swarm of fists, Jury dropped a brick wall in his opponent’s path with a big overhand right a minute into the second round.

“I was kind of throwing this overhand hook because I was seeing he was coming in with his head straight up and not really using too much head movement, and that's a good punch of mine when someone isn't really moving their head,” explains Jury, whose raging right nabbed him another win and some fame for a young career that truly deserves the attention. What’s an undefeated finishing machine have to do to get some recognition around here?

The 24-year-old from Hazel Park, Michigan has faced 12 and stopped 11 with four submissions and seven knockouts. While neither of his two quick stints on TUF panned out as one would have expected, “Fury” has netted three consecutive wins inside the Octagon in each of the archetypes one can earn a victory: submission, decision, and knockout. A guillotine choke of Chris Saunders in his UFC debut in June 2012 is followed six months later by a one-sided distance-length beatdown of another former TUF finalist in Michael Johnson, then the easily .gif-able Nijem win earlier this year.

“I feel like it's showing that the work I'm putting in and the lifestyle I'm living is working,” affirms Jury. “It just reimburses my confidence and makes my confidence stronger. Before, I always believed that I could compete at the highest level, but now I know. Not only do I know, I've got the examples to prove it. I'm becoming a more well-rounded fighter with every fight. That's what matters the most to me, getting better with every fight. When I look back at the year, it's a lot of hard work and dedication that's paying off. I'm confident of that and I'm going to continue that way all the way to the title.”

Finishes always speak for themselves. One or two might be an apparition or a coincidence, but 11 in 12 professional bouts is a crystal-clear statement. As for the lone decision, one only needs to read the final statistics of 125 strikes landed to 10, six takedowns attempted to none, and seven guard passes to 0. It’s an offensive philosophy Jury has been training and perfecting in the gym since the very beginning and is the cornerstone of his own grappling system, Jury Jiu-Jitsu. When not teaching it to others, Jury is sharpening its effectiveness in the cage and on the mats of the highly-regarded Alliance MMA gym in Southern California.

“I want to finish the guy as quickly as possible and I think that's my job,” declares Jury. “If you look at my resume, I do it very well. Training at Alliance MMA, they really step that mentality up even more. It's a kill kill kill brainwash even when I'm sparring. I used to be worried about my sparring partners, but now, I know it's not my job to worry about my sparring partners - it's my coaches' job. It's my job to finish my partners, to finish my opponents, and to have that killer instinct. I don't need to hold anything back anymore. I can go out there and run wild.”

Up next, a September 21st showdown with yet another TUF finalist, as Jury will take on the 9-3 Mike Ricci at UFC 165 in Toronto. At 27 years old, the Montreal native lost to Colton Smith in his UFC debut before getting back on the winning track against Colin Fletcher in March. The latest product of the famed Tristar Gym is a big and athletic lightweight with a good gas tank and more than half his wins via knockout. On TUF 16, “The Martian” earned a devastating Knockout of the Season bonus with a vicious, first round elbow to secure his spot in the finals.

In preparation for Ricci, the training grounds are in SoCal at the acclaimed Alliance MMA. All under the watchful eye of head coach Eric Del Fierro, Jury pushes himself against some of the sport’s brightest like Phil Davis, Michael Chandler, and UFC bantamweight champion Dominick Cruz. With a litany of expert coaches from Del Fierro and Tony Palafox for striking to Jared Platt for grappling as well as a strength and conditioning coach and even a sports psychologist, Jury is more than confident with his preparation when headed into the Octagon.

“I feel like there are not that many places where you can get that top level of training, that level of training partners, coaches and all that stuff wrapped into one,” states Jury. “When I'm warming up for a fight and all the nerves are kicking in, it's one of those things that really relaxes me knowing that I have done everything in my power to get ready for this fight. There's nothing that I haven't been through, there's nothing that I haven't seen. It's time to just go out there and have fun.”

This Saturday at the Air Canada Centre in “The Queen City,” two eager lightweights will collide as Jury sets his sights on Ricci. For “Fury,” it’s another opportunity to establish himself as the frontrunner of the emerging elite of the division’s next generation.

And what Jury considers fun is jaw-dropping action for the rest of the world.