Myles Jury: The Fury and the Dream

"I think about all the hard work and sacrifices I’ve made since I was 16 and it’s all coming to a head right now." - Myles Jury 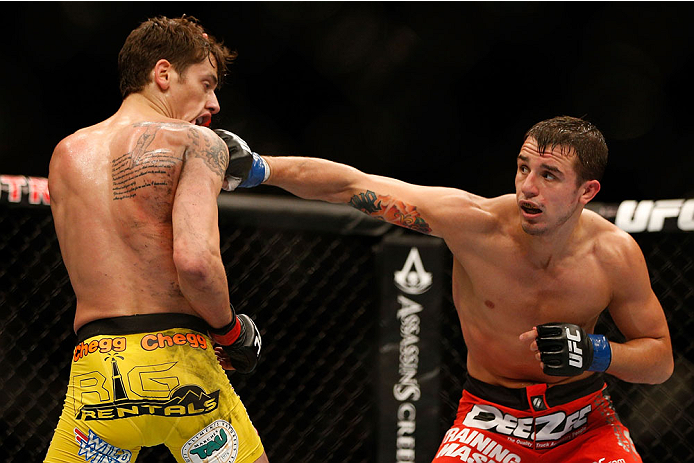 Myles Jury is a difficult fighter to categorize.

From a stylistic view point, the 25-year-old is a bold representative of the “next wave” of mixed martial artists, as he’s showcased proven talents in all facets of the game inside the Octagon. “Fury” has a dogged tenacity on the wrestling grind, slick submission skills when the action is on the canvas, and the ability to settle the opposition with the power in his striking attack.

Those talents have the undefeated Michigan native blazing a path up the lightweight ranks, and that trajectory has created another interesting wrinkle to his profile. The Team Alliance fighter is one of the brightest prospects currently working in the 155-pound fold and the expectation for bigger things can be found on all sides of the San Diego transplant. That said, the prospect label is one that comes with a unique expiration window as a fighter either breaks through into the next tier of competition or is set back and forced to restart their climb.

With Jury’s flawless 13-0 record and four consecutive wins under the UFC banner, the momentum behind him is strong as he approaches the biggest ‘show and prove’ moment of his young career. The Ultimate Fighter alum will face the ever-resilient former title challenger Diego Sanchez this weekend at UFC 171 in a fight that will hold heavy consequences for both men. While Jury is looking for passage into the deeper end of the lightweight pool, “The Dream” is fighting to remain relevant in a division he once attempted to rule.

Yet, despite the circulating dialogue, Jury chooses to ignore the chatter and keeps his focus locked on the things he can directly affect come fight night.

“It’s your guys’ job to make the fight sound important and write about the different angles, but to me 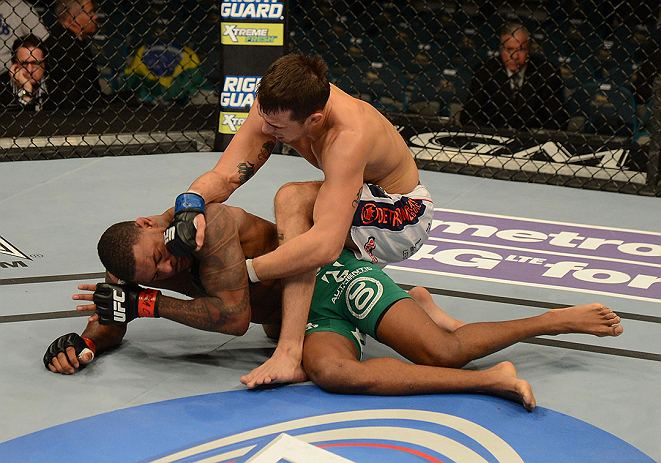 it’s just another fight,” Jury said. “I was talking to someone the other day about how people are trying to be Chael Sonnen out there selling fights or people are trying to become the next Floyd Mayweather. I see why people do it because there are profits to be made and money to be made selling fights, but that’s not the way I want to go. I want to stay true to myself and want to be known for my performances and my skills. I don’t want to be known as that guy who hyped everybody up, then won some fights and lost some fights. I want to be true to myself and my fans and let my future dictate itself.

“I feel great in my personal life and my professional life. I feel like everything is in alignment and I believe I’m going to be able to give my best performance. Regardless of the outcome, I’m confident I’m going to be able to walk away from the cage that night and say I gave my best in there. I’m going to leave it all in the cage and that is what is important to me. That’s what matters to me. I don’t really care about what the critics say or the storylines about what is going to happen if I win or lose; I just care about my performance. I think about all the hard work and sacrifices I’ve made since I was 16 and it’s all coming to a head right now. This is a great opportunity for me to come out there and showcase my skills.

The matchup in itself is a study in contrasts in all facets. Where Jury operates with a laid back Southern California chill, the season one TUF winner is the embodiment of pure intensity. Where the Hazel Park native takes a cerebral approach that allows him to make adjustments on the fly, the Jackson-Winkeljohn fighter has his foot on the gas pedal from jump street. That approach has allowed Sanchez to overwhelm a long list of opponents throughout his career, but Jury insists he won’t fall prey to the Albuquerque native’s pressure.

Jury intends to handle Sanchez by keeping his cool and he is confident he has what it takes to tame what has proven to be a unique beast on Saturday night. > Watch: How Myles Jury Measures Success

“To prepare for a guy like Diego Sanchez you have to come into training in shape,” Jury explained. “You have to bring in sparring partners that mimic his style and look to take advantage where there are openings. Sometimes an over-aggressive style is going to leave you open. That’s one of the biggest problems with being so aggressive. You just have to take into account what he’s good at, recognize where the holes are and then formulate what you are going to do around that.

“The most important thing in my mind is just keeping emotions in check. Emotions are good to a point but they can also get you in trouble. The biggest thing with him is controlling my emotions when I fight him and just looking at it and treating it like it is another fight. At the end of the day that is what it is to me. I’m excited for the opportunity, but there were a lot of opponents before Diego and there will be a lot of them after Diego. He’s another page and chapter in my book. That’s how I’m going to treat it.” 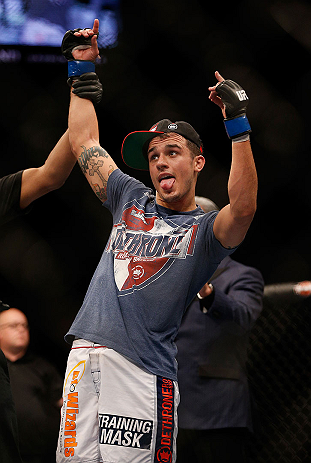 While Jury has his focus locked on the task at hand and has kept outside distractions at bay, he does recognize the situation around him changing. Where some fighters get caught in the lights of a rising profile and increased recognition from the fans, Jury gauges the transitions by the higher caliber of opponent he continues to face as he moves up in the divisional hierarchy.

From being a competitor on The Ultimate Fighter to being on the main card of one of the biggest pay-per-view cards of the year is a solid amount of ground to cover and Jury has accomplished this feat in a very short amount of time. These marks and measures are certainly not lost on him, but by keeping the focus locked on the challenges he must face instead of the fleeting moments of being a bit more visible, Jury has a better understanding and clear view of the road ahead.

“I’ve definitely felt the momentum change,” Jury said. “My main goals in this sport of course have to do with making a name in the sport and making a living, but when I was in the gym back before everything was popping with the UFC, I just wanted to compete against the best fighters in the sport. I wanted to have an opportunity to be the best in the world someday. I feel like I am making progress and facing tougher competition every step of the way. If I had taken this fight with Diego when I first got to the UFC, I honestly would probably feel like I wasn’t ready for it. But I have some experience now and I don’t think I could be any more ready than I am right now.”