Myles Jury and The Decision that Created a UFC Fighter

"I always knew with this sport always evolving, I couldn’t just be comfortable in my own backyard and have my regular training partners." - Myles Jury 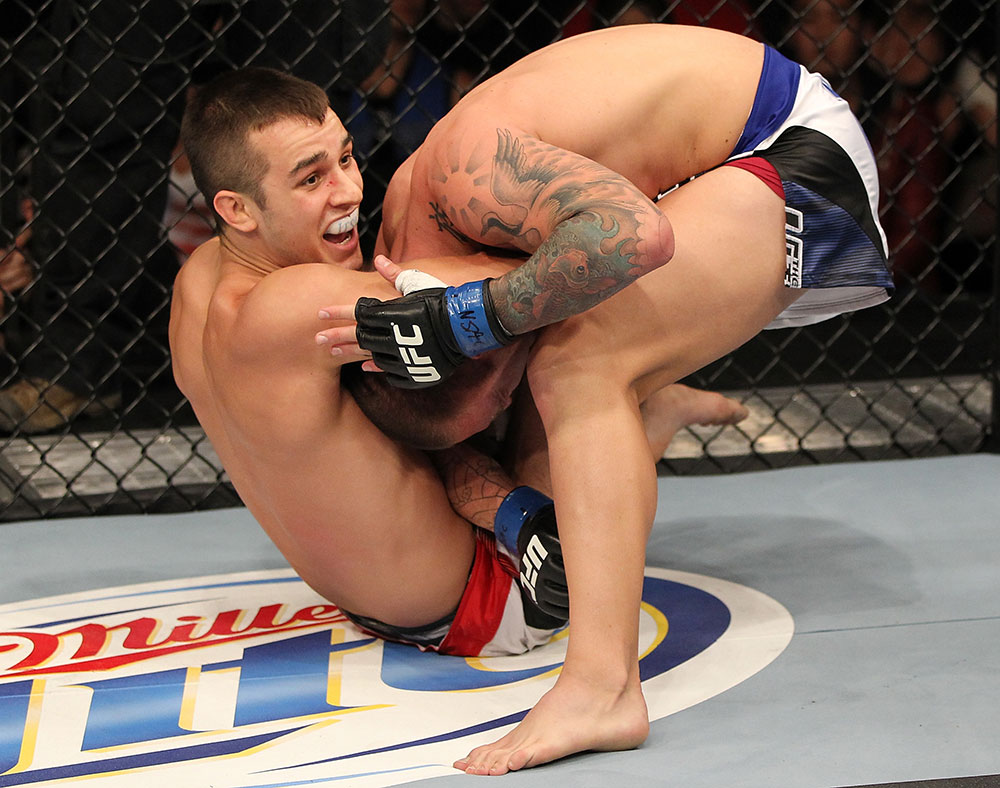 The list of UFC fighters who got their start in Michigan isn’t a long one. You’ve got Hall of Famer Dan Severn, which is a nice way to begin, but after that, it’s clear that the Wolverine state isn’t quite the hotbed for the sport that other areas of the country are.

So you could say lightweight prospect Myles Jury already had a strike against him when he was starting out, but whether it was wrestling, jiu-jitsu, kickboxing, or eventually, MMA, the Hazel Park native’s competitive streak was strong enough that he knew that one day he would have to leave home to reach his potential.

“James Lee fought in the UFC, I had a couple of trainers that fought a lot and were really great technically, but I really looked at the guys that were at the top of the sport like GSP (Georges St-Pierre) and Anderson Silva, and I always knew with this sport always evolving, I couldn’t just be comfortable in my own backyard and have my regular training partners,” said Jury of his early days in MMA.

Knowing what’s good for you and your future, and actually following through with it are two entirely different things though, especially when you’re just a kid in your early twenties. But by the time Jury had built a 9-0 record on the local circuit in 2010, fighting mainly for the King of the Cage promotion, he decided to take the plunge and move out to southern California. A spot on The Ultimate Fighter 13 followed, but then disaster struck.

“It was my opportunity,” said Jury of making it onto TUF 13. “I’m gonna win this show, I’m gonna win fights, get financially set and accomplish my dreams and do it all. And then it’s all ripped away from me. I tore my ACL the first day there and it set me back. I had every excuse I could have used to say ‘hey, let’s go home, pack it up, and see where it goes.’ But I stuck to my goals and my dreams. It was make or break, and I got through it.”

An early favorite on the show, Jury’s injury was met with an assurance from UFC president Dana White that he would get his opportunity to compete on the sport’s biggest stage, either on TUF or in the UFC, and when TUF 15 rolled around, Jury was back and healthy, and with a win over Akbarh Arreola, he had secured a spot in the house for the reality series’ first live edition. Jury would lose a split decision to eventual finalist Al Iaquinta, but when the season finale arrived in June, Jury was impressive in finishing Chris Saunders via guillotine choke a little over four minutes into the first round.

At long last, Myles Jury had arrived. And though it wasn’t a road without its share of potholes, he obviously has no regrets about taking it.

“While I’m young, I would rather take the biggest risk of my life and move out to California with nothing, trying to make something of myself, instead of being comfortable and never wanting to take that risk,” said the 24-year-old. “I don’t want to look back when I’m older and be like ‘I never did that. Maybe I could have been a better fighter than I was if I would have taken that chance.’ I just bit down, flew to California with nothing and trained full-time.”

Working with the renowned Alliance MMA team in San Diego, Jury gets a daily, and sometimes painful, reminder that in this game, steel truly sharpens steel. With fighters like Jeremy Stephens, Dominick Cruz, Phil Davis, Ross Pearson, Alex Gustafsson, and Brandon Vera in the gym every day, if you don’t get better, you get left behind. That’s a rough lesson to learn and one that comes with its own share of obstacles, but it’s something he isn’t likely to have received had he not taken the trip out west two years ago.

“Sometimes I think about it and I’m like man, it would be so much easier just to be back in Michigan and have a couple up and coming guys that aren’t established and be the big fish in a small pond, but with moving my training out to California, I knew that being a small fish in a big pond I’d get a lot more experience and I would be able to be the best fighter I could be,” said Jury, who obviously has the respect of the UFC brass, because this Saturday at UFC 155, he will face Michael Johnson in just his second Octagon outing. Johnson, a finalist on season 12 of TUF, has done a great job of establishing his credentials in the 155-pound weight class, winning four of six bouts, including three in a row in 2012. It’s a step up for Jury, but one that he’s excited to tackle.

“I think it’s a great fight,” said Jury of the matchup. “I’m not one of those guys who’s just trying to call for a title shot and I’m not trying to pick the easiest guys in the division. It’s a great fight for not only myself, but for the UFC and for the fans. I think it’s gonna be a great, competitive fight, and I feel confident that I’m gonna come out with the victory.”

In some ways, it’s a fight Jury has prepared for hundreds of times throughout a near-lifetime of combat sports competitions. And like each of them, the nerves are still there.

“I talked to my coach the other day, and I was like ‘man, I feel like I’ve been doing this my whole life, and I know that this is just another fight. I’ve been through this process so many times, I was on The Ultimate Fighter, I’ve been in the worst case scenario with the cameras in your face 24/7, but I still feel like a little kid that’s nervous.’ He said that never goes away until you get into the Octagon and you start getting hit and hitting the guy and then you get right into the zone. So I’m definitely always nervous, but it’s a good nervous. It keeps me on point.”

California-trained and Michigan-tough. That’s a winning combination for Myles Jury.

“I just focus on my training and everything I can do to prepare, and I have fun while I’m out there fighting,” he said. “I’m at the stage in my career where I’ve got goals, and I’m just trying to accomplish them.”