My UFC-BBQ Weekend: A Different Kind of UFC Story 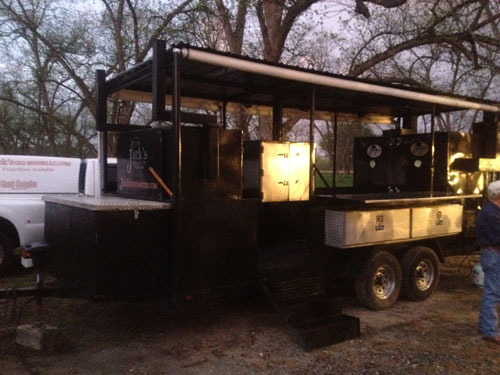 Two weeks ago, my wife and I flew to Atlanta, rented a car and drove two hours due south for a single purpose. Our destination was the tiny town of Unadilla, Georgia.

Let me put the word "tiny" into perspective. Internet research suggests that the town's population is less than 2,900 people, which is about 20 percent of the capacity of the MGM Grand Garden Arena, a frequent home for UFC events. I'm sure there is a stop light somewhere in town, but we certainly did not come across one during our three-day stay. And literally everyone we came across was about as friendly as they could possibly be. It suffices to say that Unadilla is the quintessential tiny southern town, one where time sort of seems to stand still -- in a good way.

Tina and I were in Unadilla for a three-day school on cooking barbecue. No, not the kind of barbecue that you toss into the oven of on top of a gas grill and then smother it with store-bought barbecue sauce. The kind that stirs passion in those lucky enough to come across it. The kind that takes the love and devotion of hours upon hours of low temperature cooking on a smoker or pit after using actual coals and hardwood, meat injected with marinade, and covered with dry rubs and homemade sauces.

We figured that if we wanted to up our backyard barbecue game for friends, family and the benefit of our own taste buds, we should stop with the trial and error, put down the cookbooks, and take a class from the best of the best -- none other than the man himself, Myron Mixon of Jack's Old South, the winningest man in competitive barbecue history.

I happened to wear a BJ Penn walkout tee shirt to the first day class. It was not a purposeful choice. I just grabbed a tee shirt because we were going to be working with meat all day, and first on the agenda was a lesson on cooking a whole hog.

During the first break in the action, one of my table mates pointed to my shirt and asked if I was into the UFC. When I responded affirmatively, he couldn't wait to talk about his all-time favorite fighter, Chuck Liddell. He was also a giant Forrest Griffin supporter, since the two attended the same school in Georgia – a fact he was very proud of, by the way. This guy was at Myron’s house to help hone his craft ahead of The Masters golf tournament in Augusta, Georgia, since he was going to have a tent across the street selling barbecue to make some extra money. He paid close attention to Myron and took lots of notes, but every break consisted of UFC talk.

Another fine gentleman from South Georgia at our table, a wrestling coach at an alternative school for at-risk youths, joined the discussion during just about every break. This guy showed up in Unadilla with a three-ring folder filled with his barbeque secrets. He was there alone, fiercely focused on honing his craft because he was also a competition cooker, one who earns several thousands of dollars during weekend competitions.

Think about that for a moment. He earns money cooking. He has access to the greatest of the great. Yet, he allowed his focus to wane time and time again to talk about the UFC.  He also talked about how mixed martial arts was a great tool to teach discipline and respect to his at-risk students.

As others overheard the conversation at our table, they took the opportunity to join in. Will Jon Jones survive his title defense against heated rival Rashad Evans at UFC 145 on April 21st?  Will Anderson Silva and Georges St-Pierre ever fight? Who is the true pound-for-pound king? Favorite fights. Favorite fighters. Other dream matchups. Will anyone beat Junior dos Santos? Those who found out that I write for the UFC wanted to know if Dana White was really like the guy on "The Ultimate Fighter" -- still an addicted fan despite his perch atop the Zuffa's organizational chart. They wanted to know if the fighters were cool guys in person, rather than the unapproachable athletes who dominate many other major sports. And so on and so on.

I dare say that the UFC was the most popular topic of conversation, apart from barbecue, during the three-day class. I overheard lots of conversations on the subject and participated in even more, particularly on the last day when there was as much time spent eating the mouthwatering meats as there was instruction.

I was completely blown away at how many people wanted to talk shop and the level of passion for the sport in a place where I never dreamed I would experience it. In hindsight, I probably shouldn't have been surprised.

True barbecue has a cult-like following, much like the UFC did before it exploded into the mainstream a few years ago.  These folks are extremely passionate about great 'cue, just like UFC fans are passionate about mixed martial arts. There is even an online barbeque forum with approximately 50,000 members. I perused it on the plane back home, and it contained lots of passionate, opinionated discussions. The resident ‘cue cognoscenti dropped deep knowledge. Award-winning competitors posted their thoughts. And certainly weekend backyarders dominated the casual talk.

One unwritten message clearly dominates the forum. Great BBQ is something few people truly experience. When one finally comes across something prepared by someone of Myron’s level, they are often hooked for life. They purchase a pit that can weigh as much as 1,000 pounds – just for creating backyard delights. They attend regional or even national contests. And they scour the Internet with an insatiable hunger for ‘cue knowledge.

More importantly, they belong to this informal fraternity of people who believe in their heart of hearts that they know something that the rest of the world does not know – the greatness of top-level ‘cue.  The blogs and forum participants protect the integrity of barbeque with real ferocity.

Sounds just like a UFC fan before TUF skyrocketed the sport into mainstream, doesn’t it?  Longtime hardcore followers know what I’m talking about right now.

For those who still don’t see it, rewind almost a decade ago. The only place for up-to-date information were the forums and the websites that covered the sport exclusively. The big boy media outlets were completely in the dark. The major MMA forums were remarkably similar in size and content to what I saw on the barbeque forum. Lots of unbelievably knowledgeable fans participated on a regular basis. Fighters, stud commentator Joe Rogan, and even UFC boss Dana White participated from time to time – Rogan a bit more often than that. Tens of thousands of fans filled the pages with hundreds of topics and even more posts.

The overriding message on all forums and blogs back in the day? You guessed it. UFC fans knew they were enjoying a sport that the rest of the world didn’t quite understand yet. It was a sport that had such tremendous fan appeal that once it actually caught the attention of the mainstream, it became the fastest growing sport in the world – a sport that the hardcore fans have fought hard to protect through forum posts and blogs.

UFC fans love our sport like fans of few other sports. The same can be said for those who are really into barbeque. I never realized that until my trip to Unadilla. But the parallels between barbeque and the UFC don’t end there. I’ll peel back the onion one layer further.

Go back about a decade, once again. Barbeque competitions, much like the UFC, largely enjoyed an underground existence. No major media coverage. No reality shows on cable television. Not much mainstream appeal.

Mixon was already the king (or close to it) back in those days. I’m sure he made a comfortable living 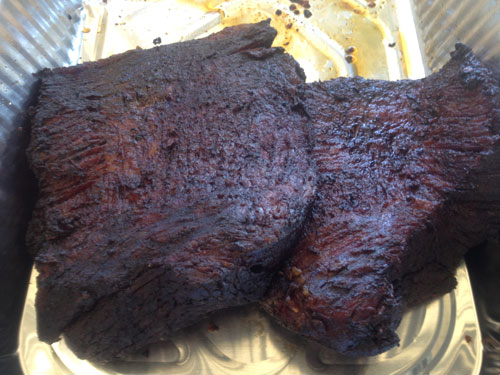 then from his catering business and the sale of his sauces and ribs. I’m sure the money he earned from competitive cooking was nice, but I doubt that it was enough to call it a separate living. Then a reality show on cable television titled “BBQ Pitmasters” came along and changed everything.

Competition cookers now compete for six-figure purses. And the king has ridden the wave of barbeque popularity to transform from a cult king to an iconic figure with international appeal. Not only does he have a New Times best-selling cookbook. He also has a successful restaurant in Georgia with a second on the way in Miami and a ridiculously successful catering business. Oh yes, he also recently hosted Korean delegates on their trip through the south.

Sounds a lot like Chuck Liddell’s career path, doesn’t it? How about Georges St-Pierre? Anderson Silva? It is rise to fame and fortune that parallels that of any number of high-profile UFC fighters who have been in the game since the early 2000s.

Top fighters back in the day were stars solely in the fighting community, had little or no major consumer brand appeal from a marketing perspective and, while they earned enough to pay the bills, they were far from wealthy. TUF changed all that. Guys like Liddell, GSP, Silva, and others have gone from living comfortable lives to being multi-millionaires with true crossover star appeal. Business opportunities, whether owning gyms, holding seminars, appearing in Hollywood movies or on television shows, abound. It is a completely different existence for a top fighter compared to 10 years ago. Just like with barbeque.

The end of the weekend perfectly encapsulates what I’m talking about.

After completely engorging ourselves on Sunday afternoon with the succulent meats that we prepared during the class, Tina and I were walking to our car when a younger guy came up and asked, “Hey, I heard you work with the UFC, is that right?” He said something like that.

I responded in the affirmative, offering my hand in greeting. It was Kyle Brooks, a member of Jack’s New South, the barbeque team led by Myron’s son, Michael Mixon.  Like father like son. After just a year of competition, Michael and crew are already ranked as one of the top new teams on the circuit, nationwide. These guys were fresh off of a big showing at The Sixth Annual St. Patty’s Q in Dublin, Georgia, where they received a perfect score on spare ribs and placed fifth in pork loin.

This was an excellent chance for me to grab a few last nuggets of information from the next generation of competition cookers in my quest for backyard perfection. That opportunity never arose. Why? All Kyle wanted to talk about was the UFC.

To no great surprise, he spoke about our sport with the same glow in his eyes that I saw when he was watching Myron work his magic during class. He kept referring back to guys from the early days of PRIDE Fighting Championships. The best part was he brought up a couple of fights that I hadn’t seen --- or maybe I had seen them and had forgotten. I get paid to know a bit about the UFC, and here was a top ‘cue competitor teaching me a thing or two. I loved every minute of it!

For the record, he is picking Jones to win later this month.

Barbeque and the UFC. I guess they aren’t so different after all.