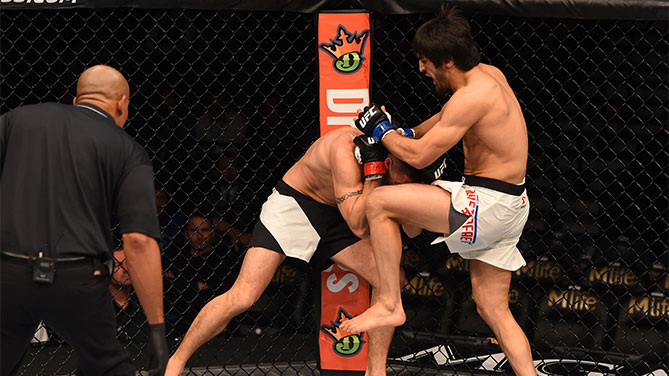 Russian lightweight prospect Magomed Mustafaev extended his win streak to 12 on the UFC 194 early prelims Saturday at the MGM Grand Garden Arena, halting Joe Proctor in the first round.

The bombs were flying early and often from both fighters, making each punch, kick and knee thrown a potential fight-ender. Soon, it was Grozny’s Mustafaev closing the show, jarring Proctor with a left kick to the body before a left knee hurt him even further and then a right knee dropped him. Referee Mark Smith intervened soon after at the 1:54 mark.

Mustafaev improves to 13-1 with the win; Massachusetts’ Proctor falls to 11-4. 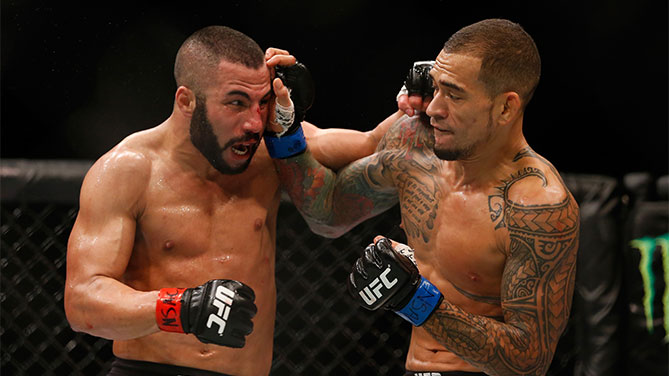 After a technical chess match on the feet in the opening stanza, Canada’s Makdessi (13-5) began to find his range in the second, countering well as Medeiros (12-3, 1 NC) moved his hands and feet a lot but wasn’t landing anything significant outside a sporadic left jab. That changed in the third, as the Hawaiian tagged Makdessi repeatedly with flush shots, even scoring a flash knockdown in the closing seconds that may have been the deciding blow in the fight. 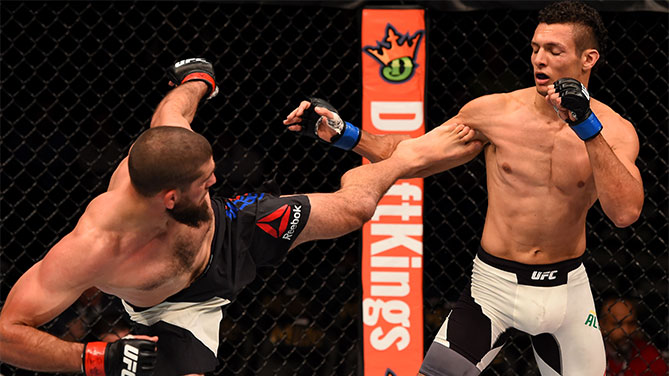 Sidelined by injury since Dec. of 2013, former Ultimate Fighter winner Court McGee made a triumphant return to active duty with a workmanlike three-round unanimous decision win over Marcio Alexandre Junior.

“Determination, dedication and never giving up made all the difference for me,” McGee said. “I’d like a step up in competition the next time out. I’d also like to see constant improvement on my part and to work my way to the top, one fight at a time.”

Unafraid to trade with the karate expert, McGee was aggressive throughout the opening frame, though it was Alexandre holding the edge until a spinning backfist by the Utah native opened the Brazilian up for a late-round takedown.

There was little significant action in the second, but McGee’s greater work rate and clinch work allowed him to bank the frame. McGee turned up the heat in the final round, getting two takedowns and controlling the action at close range as Alexandre struggled to break free.