A Must-See May Inside the Octagon

With four UFC events in May, what are ten key matchups to look out for? 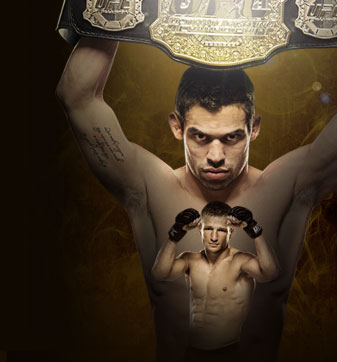 With the final April fight card in the books, it’s time to look ahead to the best action set to hit the Octagon in May, and with four fight cards - including the first doubleheader in UFC history to close out the month - there are plenty of bouts to pick from.

Rather than putting these 10 bouts into some kind of subjective order that delineates how high they rank on the “must-see meter,” I figured the best way to pass along the top fights of the month is in the order they will appear. This way, you know which dates to circle on your calendar and can plan your social lives accordingly.

You all do that too, right? I can’t be the only one that structures his life around the UFC.

Here are the top fights headed your way in May.

Tucked away on the preliminary portion of the UFC’s first fight card in Cincinnati since Anderson Silva created “The Rich Franklin Zone,” this flyweight battle could have a greater divisional impact than most of the bouts scheduled to take place at the U.S. Bank Arena.

Long considered one of the top 125-pound competitors in the sport, Montague’s UFC career got off to an inauspicious start as “The Mongoose” was lit up by former TUF winner and title challenger John Dodson. An injury postponed his return, but now that he’s healthy and has some time on the roster under his belt, expect to see the best version of Montague yet when he makes his sophomore appearance inside the cage.

After winning his debut in the bantamweight division, Japan’s Horiguchi drops down to where he’s best suited to compete in the UFC, and he has the potential to become an instant contender with a win over Montague. The 23-year-old former Shooto standout showed very good power in his win over Dustin Pague, and should (theoretically) carry that with him now that he’s competing at flyweight.

The lightweight division is already stocked with contenders, but can you really ever have too many exciting names to bandy about in the 155-pound ranks? While these two might be a handful of wins away from entering the upper tier of the talented weight class, they’re both perpetually entertaining fighters, and pitting them together should produce fireworks.

Koch made his UFC lightweight debut at the end of February, blistering Rafaello Oliveira with pinpoint marksmanship to earn a first-round stoppage win. Cruickshank, meanwhile, impressed a month earlier with a “wheel kick and punches” finishing combo straight out of Street Fighter II against fellow TUF alum Mike Rio.

While there is always the possibility that two exciting strikers cancel each other out and produce a staring contest where neither is willing to pull the trigger, these two have never been shy about unloading their weapons and trusting that they’ll get the better of things, so expect excitement from Koch and Cruickshank.

The titular pairing on the Cincinnati fight card is a pivotal bout in the welterweight division.

No one in the weight class has a longer winning streak than Brown, who has earned six consecutive victories heading into his first main event assignment. A back injury dashed his planned bout with Carlos Condit and the title chase has carried on without him since his win over Mike Pyle last summer, leaving “The Immortal” playing catch up, despite his dominant run of success in the Octagon.

Silva is a fighter who has appeared poised to take the next step and develop into a legitimate contender on a number of occasions, but has yet to make that leap. Coming off an inventive and impressive performance against Takanori Sato, the 29-year-old Brazilian could finally climb to contender status by bringing Brown’s winning streak to a halt.

Whoever emerges victorious from the main event will find themselves in the thick of the chase in the compelling welterweight ranks.

Lawler is wasting little time getting back into the fray following his championship loss to Johny Hendricks back in March, jumping at the opportunity to return to the Octagon and start another climb towards the top in a tough pairing with Ellenberger on Memorial Day Weekend.

While the veteran Lawler turned in the best performance of his career last time out, “The Juggernaut” is competing for the first time since arguably his worst showing, last summer’s actionless loss to Rory MacDonald. Injuries have scuttled a couple proposed pairings, but now Ellenberger has the opportunity to erase the memories of his anti-climactic showing in Seattle with a win over the recent title challenger.

Though it will take more than a single win to elevate either of these two into a title shot, they don’t have a ton of ground to make up in the title chase, and whoever gets the win here should find themselves with a marquee matchup lined up to close out the year.

Here’s how I envision this fight coming together:

Cormier: “Dana, I want to stay busy. Gustafsson has next, so get me a fight. Don’t matter who it is.”

White: “Let me see what I can do.” (Hangs up with Cormier, calls Henderson) “Dan, DC is looking for an opponent for Memorial Day. Interested?”

Henderson: “Sure, I’ll be his Huckleberry.”

That’s probably not how it happened, but this is a chance for Cormier to cement himself as a championship contender in the light heavyweight division, while Henderson looks to play spoiler and show that Randy Couture isn’t the only one that can make a run at the title into his 40s.

As much as people enjoying making fun of the Joe Rogan “This guy is a monster!” sound clip, the reality is that the last time (and only time) Barao lost a fight, “Hollaback Girl” by Gwen Stefani had not yet burrowed its way into our heads for the summer.

That shhh is bananas, B-AN-AN-AS.

While some people question Dillashaw’s rapid ascension into the position of title challenger, the TUF 14 finalist and Team Alpha Male member has shown steady improvement over the course of his UFC career and he has a mean streak that is notable among his usually laid-back teammates.

Either we see an incredible run of success continue or the “No UFC titles for Team Alpha Male” curse gets broken. Both angles are intriguing and the fight is bound to deliver, so don’t miss it.

You’ve got to love the moxie both middleweights in this main card pairing are showing here.

On one side you’ve got Barnatt, fresh off his best performance to date and on a mission to wipe out all the unbeaten fighters in the division one-by-one until he’s the last man without a loss left standing. Coming off back-to-back stoppages, “Bigslow” is gaining momentum as a potential contender and burgeoning star for the European market.

On the other side of the cage you’ve got Strickland, a 23-year-old who stepped up on short notice to submit Bubba McDaniel in his UFC debut and happily accepted Barnatt’s challenge to this “Battle of the Unbeatens” in Berlin.

Two emerging talents looking to prove themselves and getting an opportunity to do so on the main card for all to see - what’s not to like?

While Carmont recently had his lengthy winning streak brought to an end by Ronaldo “Jacare” Souza, he acquitted himself well against the Brazilian contender, and remains entrenched in the bottom third of the middleweight rankings.

That’s a position Dollaway is looking to ascend to, and after his first-round stoppage win over Cezar “Mutante” Ferreira back in March, “The Doberman” is closer to claiming a spot in the Top 15 than he’s ever been before.

This will be an interesting clash of styles, as both have shown strong grappling skills over their time in the Octagon, with Dollaway exhibiting great power and Carmont the superior clinch game. There is a lot at stake for both men in this one, so expect them to open up and attack from the outset.

This pairing of the two men Lyoto Machida has beaten since moving to middleweight is tremendously important for both fighters.

Mousasi needs a victory to prove he’s deserving of a place in the upper echelon of the 185-pound ranks and to validate the years of hype and promise that have carried him to this point. Once a can’t-miss prospect, his resume is littered with wins over middling competition and faded veterans, with his two setbacks coming in his toughest matchups to date.

For Munoz, this is an opportunity to get back into the win column and perhaps make one more push at title contention after coming up short on a couple previous attempts. The 36-year-old “Filipino Wrecking Machine” has been stopped in two of his last three outings and never quite managed to string together enough wins to make a real run.

If he can’t get through Mousasi here, it might be the end of the line for one of the nicest guys in the sport.

Everybody loves a good heavyweight scrap, but this one carries even more than the standard “let’s watch these two big dudes try to knock each other’s heads off” level of intrigue.

“Cigano” is returning for the first time since his second pummeling at the hands of Cain Velasquez. That kind of beating can be demoralizing and change a fighter (ask David Loiseau), so it will be very interesting to see how he looks in the cage, especially after he gets hit for the first time.

As for Miocic, this is his chance to prove he’s capable of hanging with the best the heavyweight division has to offer. Following consecutive good-but-not-great wins over Roy Nelson and Gabriel Gonzaga, this is a chance for the Cleveland, Ohio native to make a statement and put himself into the mix in the big boy ranks.

And what better way to end a marathon day of face-punching than with two heavyweights chucking leather in front of a roaring crowd in Sao Paulo?