UFC strawweight Michelle Waterson faces the biggest fight of her career Saturday against Rose Namajunas in the co-main event of UFC FIGHT NIGHT: Johnson vs Reis at Sprint Center in Kansas City.

Waterson’s story, from her deep martial arts background that led to her unique nickname “The Karate Hottie,” to her rise from Invicta to UFC, as well as her proud identity as mother to daughter Araya, 6, is featured in a downloadable e-book, titled “Meet the Fighter: Michelle Waterson,” available on Amazon.

In this except, Waterson’s whirlwind tour of media outlets in Kansas City gets off to a sleepy-eyed start – and an apology: 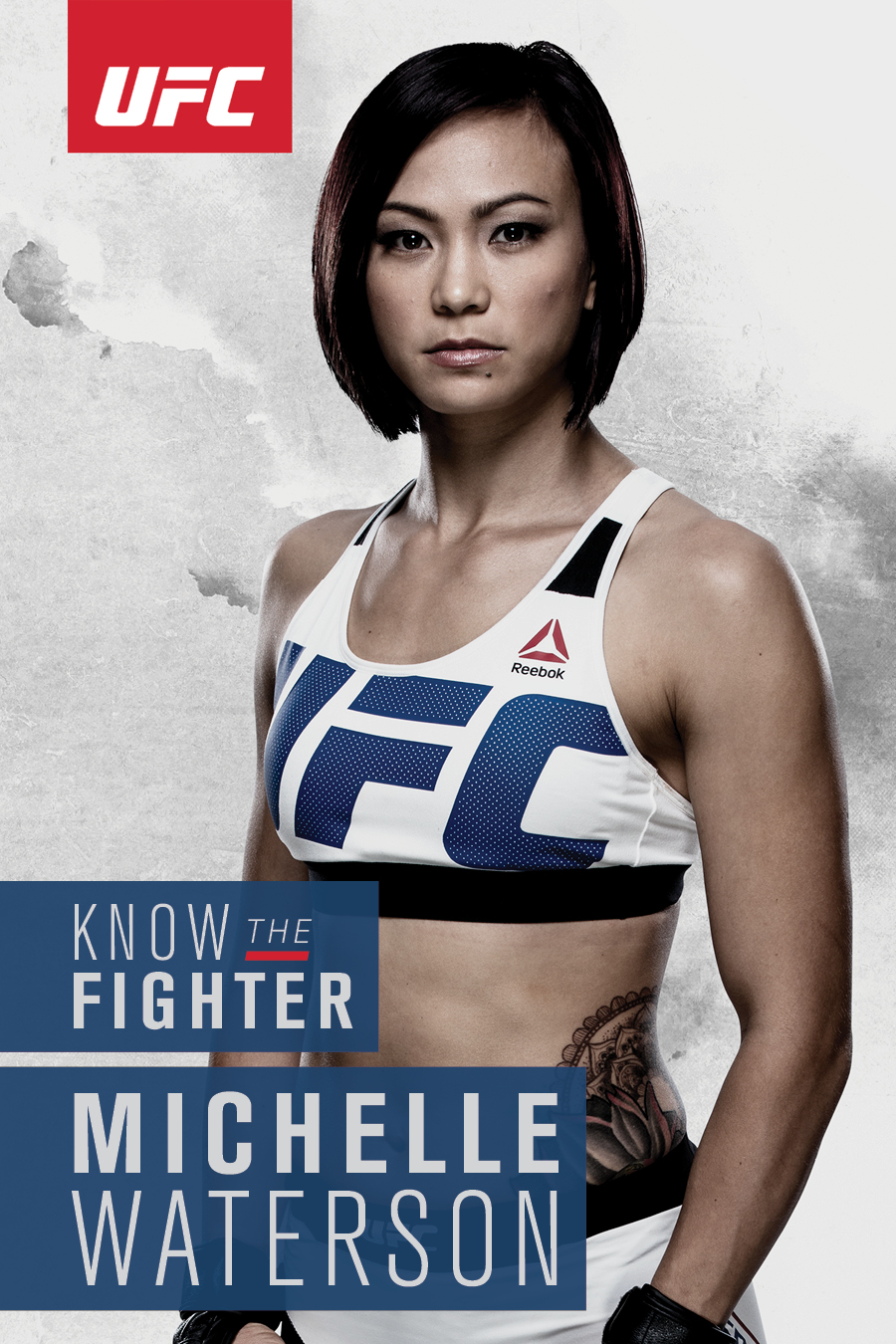 Waterson arrives in Kansas City around midnight in mid-March, an hour after a powerful late winter storm spawns tornados and hail in the area. She’s driven directly to a downtown hotel, tosses her bag onto the chair and collapses on the bed in her clothes, asleep.

Hours later, her cellphone alarm fails her. But the phone doesn’t. After the fourth frantic call, she finally stirs and answers.

“Michelle, are you ready? The car’s here.”

“Oh my God!” Waterson says apologetically, scrambling to tame her dark, shoulder-length hair into a ponytail and wrestling with a duffel bag on her shoulder as she runs out of the Hyatt elevators into the lobby. “This never happens. I set it for 5 p.m., not a.m. I am soooooo sorry. I never do this.”

Waterson woke up five minutes ago – 30 minutes after her scheduled meet-up time in the lobby – looking remarkably flawless in a sheer top, jeans, black leather jacket and black stiletto heels. She’s wearing very little makeup “and I just splashed water on myself from the sink,” she says, laughing at how glamorous her life is in pre-dawn, windy and cold downtown Kansas City.

If this looks too easy, it’s because she refuses to be viewed as high-maintenance. In truth, Waterson, 31, is an effervescent marvel, a petite, yet-powerful athlete who, at first glance, reminds you of an Olympic gymnast. One who could throw you to the ground, knock you senseless with a spinning back kick or send you reeling with a right uppercut.

She also may be UFC’s most endearing fighter. She’s certainly among its most gifted athletes: a rare combination of well-trained strength, quickness, smarts and fearlessness. Combined with her exotic, multi-racial good looks, her beguiling personality and a self-titled, proud label as Fight Mom and wife, you’re drawn in to want to know more about her.

Waterson will oblige. She’s proud of who’s she’s become, and excited about where she’s headed.

In just over a month, she and the fourth-ranked Namajunas, 24, will collide in the Octagon at UFC Fight Night: Johnson vs. Reis, at Sprint Center in Kansas City. While flyweight legend Demetrious Johnson’s title defense against Brazilian Wilson Reis is the main event, many consider Waterson’s bout with the 5-foot-5 Namajunas, one of UFC’s most exciting fighters, to be the real featured bout.

The Strawweight division is a fascinating division, filled with a global Top 10 lineup of skilled, self-assured athletes with varying stages of experience. They also happen to be female, but as the sport of Mixed Martial Arts has proved, gender means nothing with respect to box office attraction, marketability or competiveness when the cage door closes and the referee shouts, “FIGHT!”

Get ready for Fight Night Kansas City: Fight card | Fighters on the rise this weekend | Watch Road to the Octagon: Johnson vs Reis, Namajunas vs Waterson, Souza vs Whittaker | Watch free fights: Johnson vs Cejudo | Reis vs Sandoval | Be there! Get your tix here

Among the obligations for fighters are interviews, sometimes packed one after another. The questions are nothing new for Waterson, who has heard them before but skillfully answers each one with a fresh perspective. It isn’t easy.

As the interviews continue, Waterson is asked repeatedly about three compelling subjects: Her ethnicity; whether she’s really as nice as she appears; and what about Ronda Rousey?

“My dad is Caucasian; my mom, she’s an Asian lady. She likes the violence actually,” Waterson explains, before launching into her infamous, widely heard phonetic imitation of her mother’s thick Thai accent.

“She’s always very close to my corner and I can always hear her: ‘Michelle, go! Kick her butt!’ ‘You need a bettah nickname … Why you Karate Hottie? You should be ‘WHITE TIGER!’

“Yeah, my family is all very supportive. We were a martial arts family. We competed monthly, so to me fighting was more of a natural progression. It is a little scary because it can be dangerous and I have injured myself, but you can hurt yourself doing anything. So why not do it doing something you love.”

Is it hard not to hold a grudge after a fight?

“No, I don’t think so, but it also depends on the person,” Waterson concedes. “If you lay it all on the line and you know that you’ve given it all that you had, and the person that you fought respects you for doing so, then I think it’s a clean slate. You guys can leave with a part of each other, knowing that you’ve gone in there and given a piece of yourself to that person and they’ve done the same. But if they don’t have that mutual respect, then you can leave the Octagon kind of bitter.

“I’ve left bitter, after fights where I’ve given them all the props and thanked them for getting into the Octagon with me, and they’re kind of dismissive about it.”

“You don’t think she respected you, or gave you respect?” Waterson is asked. Penne, after all, is the fighter who surrendered her Invicta Atomweight belt to her in a stunning upset in 2013, who is now part of the logjam of UFC Strawweight contenders.

“Not at all. She was just kind of, whatever,” remembers Waterson, still bristling after her post-fight handshake, on the heels of a fourth-round comeback armbar submission, was coldly rebuffed. To this day, the two don’t speak.

“We all do the same thing. We’re all in it for the same reason. I’m sure there are some internal issues she’s dealing with that she hasn’t gotten over, but it just didn’t settle right for me,” Waterson recalls. “I mean, I got over it, but at the time I was like, ‘Dang, really? We just went to war and you can’t even acknowledge that? Like OK, whatever.’”