Muslim Salikhov Aims To Be Complete

UFC Welterweight Muslim Salikhov Hopes That The Changes He Made To His Training Camp Will Propel Him Back Into The Win Column At UFC Fight Night: Lewis vs Spivac
By Gavin Porter, On Twitter @ItsGavinPorter • Nov. 18, 2022

And that’s a good thing in the eyes of a highly decorated striker like Salikhov.

“We are both good strikers, so it will be a good matchup for both of us,” Salikhov told UFC.com. “Nobody will wrestle, we will both keep it standing and do battle.”

Really? But what if you have to wrestle?

Salikhov will enter the Octagon this weekend coming off a loss for the first time since 2018. The 38-year-old came up short against Li Jingliang earlier this year and has fine-tuned his training regimen in preparation for Fialho. 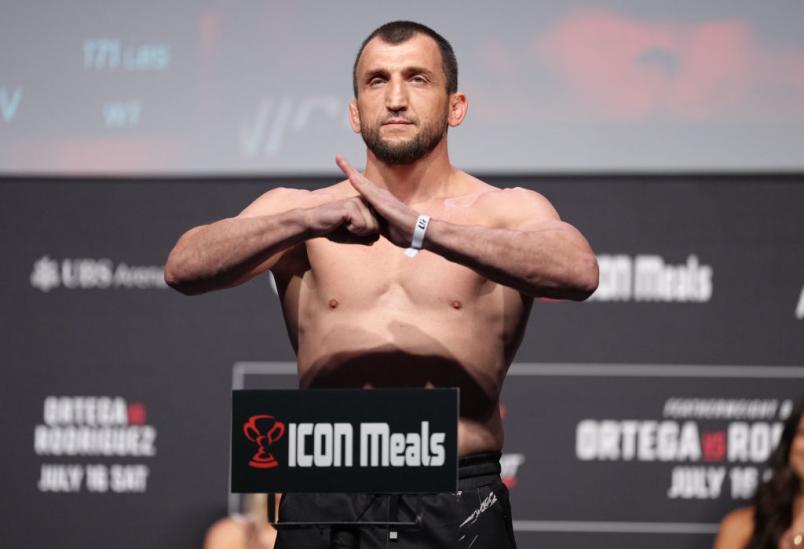 Muslim Salikhov of Russia poses on the scale during the UFC Fight Night ceremonial weigh-in at UBS Arena on July 15, 2022 in Elmont, New York. (Photo by Jeff Bottari/Zuffa LLC)

In the past, Salikhov has waited until just before fight week or during fight week to make the long travel from Dagestan to the United States. Before his bout with Li, he struggled to get a visa and that affected his training and conditioning for that fight.

Salikhov believes he was winning that fight before “The Leech” caught him with a massive strike in the second round that knocked him out of the fight.

“I win by points in the first two rounds before I got punched. Before that, I felt that I was getting tired,” Salikhov said. “I came to America nine days before the fight, and I couldn’t get a visa and I didn’t train a lot. I just did pads and that was it. Camp wasn’t that good, but I respect Li Jingliang; he did a good job and he got me with a punch. If I was training better maybe I wouldn’t get tired, and he wouldn’t get that punch.”

This time around, “The King of Kung Fu” touched down in the U.S. in September and spent the remainder of his training camp at American Top Team. His early arrival exposed him to more training partners and helped him get out of his comfort zone.

“I just understand that I need to work more with the big teams like American Top Team. Before I trained with a small team in my republic in Dagestan just like two or three guys. With this big team, it’s much better,” Salikhov said. “I feel comfortable with the guys from Dagestan but sometimes I train with the other guys to get out of my comfort zone. It’s a big difference.”

Salikhov is confident that leaving no stone unturned this time around will help him recapture the magic he had during his five-fight win streak. It was a streak that had him knocking on the door of the welterweight rankings. 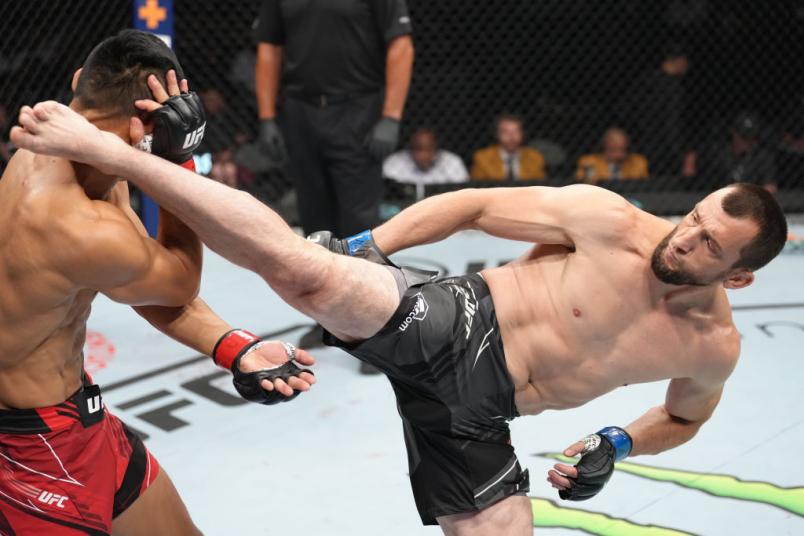 Muslim Salikhov of Russia kicks Li Jingliang of China in a strawweight fight during the UFC Fight Night event at UBS Arena on July 16, 2022 in Elmont, New York. (Photo by Jeff Bottari/Zuffa LLC)

That’s exactly where Salikhov wants to be in 2023 and he hopes that beating Fialho in emphatic fashion will set him up to get there in just one or two fights. He’s not expecting it to be easy, however, as he feels that Fialho is going to be on his A-game.

“It's MMA; everything can happen here. One punch and the fight can be over. The same thing can happen with him and he’s a good striker and he believes in his boxing and striking skills. He always pressures and I like his style,” Salikhov said. “I will do the same thing and I will try to finish the fight like him. We are going to try to kill each other. It will be a fun fight.”

Having such a game opponent draws out the competitor in Salikhov, who cracked a smile each time anything striking-related pops up in conversation.

With all the work put in, all that’s left to see now is if all Salikhov’s training camp changes will pay off and if he’ll showcase some new wrinkles in his game.