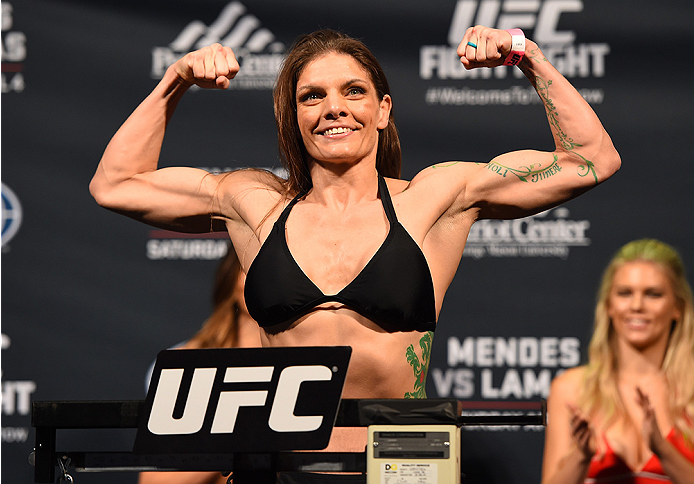 “I didn’t know if I belonged in the UFC, if I was good enough to be there. I wasn’t quite sure if I was a good fighter or not.”

That’s not something you often hear from a fighter in advance of their third trip into the Octagon, someone who arrived on the biggest stage in the sport with an unblemished record, a championship belt over her shoulder and the potential to make some noise in the women’s bantamweight division.

Then again, most fighters aren’t as willing to lay themselves bare as Lauren Murphy is.

The 32-year-old former Invicta FC champion has been sitting on the sidelines for 10 months, champing at the bit to get back into the cage to face late replacement Kelly Faszholz on Sunday after suffering her second straight decision loss to Liz Carmouche last April.

After rolling to an 8-0 professional start, she came up short in her Octagon debut against Sara McMann, dropping a debated split decision to the former title challenger and Olympic silver medalist. Seven months later, it was more of the same against Carmouche, with Murphy feeling she did enough to win, but coming away with another loss on her resume and plenty of questions running through her head.

“I think I won that fight, but that loss taught me that I need to get it together mentally or else every fight is going to be like this,” she says of her matchup with Carmouche. “‘I don’t ever want to fight like that again, so what can I change?’ The answer was my mental game.”

Murphy has used the time between her fight with Carmouche and her return to action on on the UFC FIGHT PASS portion of the card Sunday in Pittsburgh (5:30 pm ET) to re-shape the way she approaches her days going working with the abundant crop of talent at The MMA Lab.

Having started training at a small gym where she experienced a great deal of success and quickly found her comfort zone, moving to the Glendale, Arizona fight factory run by standout coach John Crouch was an eye-opening experience for the now 10-2 fighter who started her career six months after taking a jiu-jitsu class alongside her son.

“The amount of talent that was in the room and how many ass-kickings I was taking on a daily basis, I just wasn’t used to that and it really kind of brought my confidence way down,” Murphy admits with a laugh. “I know that on one hand it’s ,‘You’re training with killers; you should feel really good about going in there and iron sharpens iron,’ but I really just didn’t see it that way.

“To me, it was ‘*@#$, I’m getting my ass kicked all the time and everybody here is better than me. Maybe I’m not that good?’ That really messed with me for a long time, so that’s also what I’ve worked really hard at is realizing, ‘First, I have gotten a lot better and second, these guys are f***** killers.’”

She recounts a story from practice earlier in the day, where a teammate that has yet to make her MMA debut got the better of her on the mats and how those situations used to be what created havoc in her mind.

“That used to be the kind of thing that got into my head,” she says. “I’d be like, ‘Oh my god, this girl that is smaller than me just submitted me; how could I let that happen? What if that happens in the fight?’”

These days, however, Murphy understands that you’re going to get tapped by Mackenzie Dern from time-to-time when you’re rolling with the 22-year-old jiu-jitsu standout and ADCC gold medalist.

“It’s Mackenzie Dern – she’s a multiple-time champion; she’s won every tournament there is known to man. Yeah, she’s going to submit me,” Murphy laughs, accepting that getting caught by the young standout, who is transitioning to mixed martial arts, is going to happen, and highlighting the mental adjustments she’s made over these last six months.

“Coach Crouch actually talked to me a lot about that. He said my work ethic is on point, I’m learning really fast, I’m a good teammate. He was like, ‘I don’t have any complaints about you except how hard you are on yourself.’

“When I would go to practices, I developed all these habits on how I would treat myself and how I would talk to myself, and the way I treat practices became totally different and it changed my mindset. When I changed my actions, my mindset changed a little bit and that’s really, really helped me. In the last six months is when I made strides with that.”

And now, after sitting on the sidelines since April 4, 2015 and feeling the sting of two consecutive losses, Murphy is counting down the minutes until she finally make the walk to the cage again and gets to put the improvements she’s made in the gym into practice inside the Octagon.

“I feel like I’ve improved a lot and it’s time to get back in there,” starts Murphy, the excitement about her wait coming to an end evident in her voice. “I had a coach that used to say that when you get close to a fight you should feel like a mean-ass dog right at the end of his chain and I can picture that in my head – a mean dog, ready to break off that chain and get at whoever is holding that steak.

“That’s really how I feel – I’m at the end of my rope, ready to get out there and hurt somebody.”