Munoz and the Art of Controlled Aggression

"I definitely want him to wrestle me, and he wants me to stand up with
him, so there’s a plan we put in place so I’ll be able to enforce my
will on him." - Mark Munoz 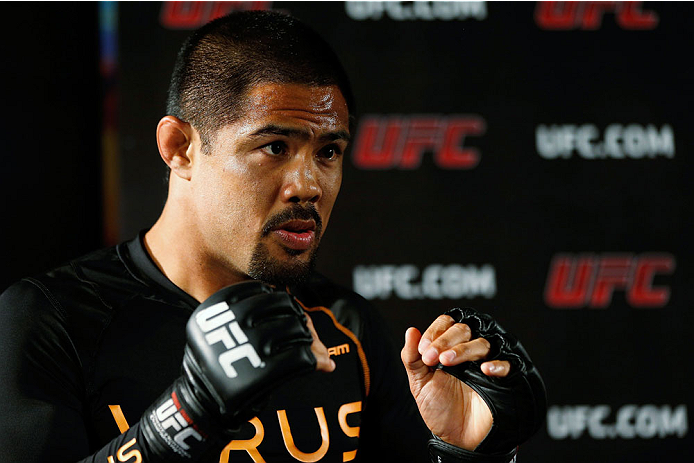 It’s becoming as inevitable as death and taxes. More and more UFC fighters will make it known to the world that Mark Munoz has helped them in some way, whether as a coach, training partner, friend, or just a guy with an encouraging word. And if you know “The Filipino Wrecking Machine,” that’s no surprise at all.

But it begs the question, with everything that the middleweight contender does for everyone else, does he ever get the time to be selfish and say ‘hey, I’ve got a fight coming up?’

He laughs before getting to the matter at hand.

“I do agree that there are times when you have to concentrate on yourself, but the reason why guys want to give to me so much is because I want to give to them,” said the leader of the Reign MMA team. “And I truly believe you reap what you sow, and if I’m giving to somebody else in training, they’re gonna want to give back to me. I want to be able to use my talents, gifts, and abilities to help them, but at the same time I want them to use their talents, gifts, and abilities to help me. And that’s what a team does.”

And a team is only as good as its leader, and Munoz is one of the best, in and out of the Octagon. It’s why he’s in the UFC Fight Night main event on Saturday, just one fight removed from a triumphant return from injury against Tim Boetsch at UFC 162 in July.

“It felt like redemption,” he said. “I feel like I have all my ducks in a row, I have all my I’s dotted and T’s crossed, I finally feel like I have the team here for me that I can rely on, and I truly believe that the time has come. I’m being smarter with my training instead of just going harder. I’ve had to switch a lot of things up and be more intellectual to my approach to training than I have been in the past. So I’m confident, and it just felt great to be back to the way I was.”

Munoz’ three round decision win was a return to form for him after a disappointing knockout loss to Chris Weidman in 2012, and despite years and years of competition, both on the wrestling mat and in the world of MMA, the 35-year-old is happy to say that he hasn’t figured it all out yet.

“You’re always learning new things,” he said. “I think that’s the key to becoming great – having humility and being able to know where you have to improve and not be so prideful that you don’t want to learn anything from anybody else. I think being humble is something that a true champion does, and that’s what I’m trying to do as much as I can because I do want to become a champion. I feel like I’m there; I just have to capitalize on the opportunity.”

To get that opportunity, Munoz must first dispatch of Saturday’s foe, and not the one he originally expected to face, as Michael Bisping was forced out of the event due to injury, prompting the insertion of former light heavyweight champion Lyoto Machida into the headlining spot. Not only did that cause a complete upheaval of the fight plan stylistically, but it also put Munoz in the position of fighting a friend in “The Dragon.”

“It’s tough,” he admits. “It was so abrupt and a surprise to me that all of a sudden I’m fighting a friend of mine and training partner. I was preparing for Michael Bisping, and he got hurt and now I’m fighting Lyoto. Not only was this a surprise and so abrupt, but now I have to totally change my approach to the fight. He’s a karate guy and I have to be able to change my strategy altogether. I don’t want to change anything that I do, but the strategy does change and I don’t want to solely concentrate on what he does because then it’s paralysis by analysis. What I want to do is be able to concentrate on what I do best and enforce it on him and do it in a strategic way.”

And while Bisping is a busy striker who would still leave Munoz the opening and opportunity to get a takedown, Machida is a whole other puzzle, one that can make you pay for being over aggressive. And we all know Munoz likes to get over aggressive.

“That’s something that I had to get used to,” he said. “I had to watch some of his footage to be able to know and capitalize on the times that I can actually close the gap, and do it in a way where I don’t get counterstruck by him and his masterful striking. I don’t want to be another knockout on his record. I’m not going to go in there and just carelessly try to close the gap. I definitely want him to wrestle me, and he wants me to stand up with him, so there’s a plan we put in place so I’ll be able to enforce my will on him, and it’s definitely gonna be a controlled aggression this time.”

If anyone can pull that off, it’s Munoz, simply because at this point in his career, he’s so hungry to get to the top that if you told him he had to pull off a flying armbar to win, he’d probably at least attempt it. So when he says that this is the most important bout of his career, he means it, and he will fight accordingly.

“With a win over Lyoto, it’s definitely gonna make some waves in the division and put my name in the hat for people to talk about,” he said. “I truly believe I’m at the top and I want to become a UFC world champion.”