Munhoz wants bout with Font to be a war 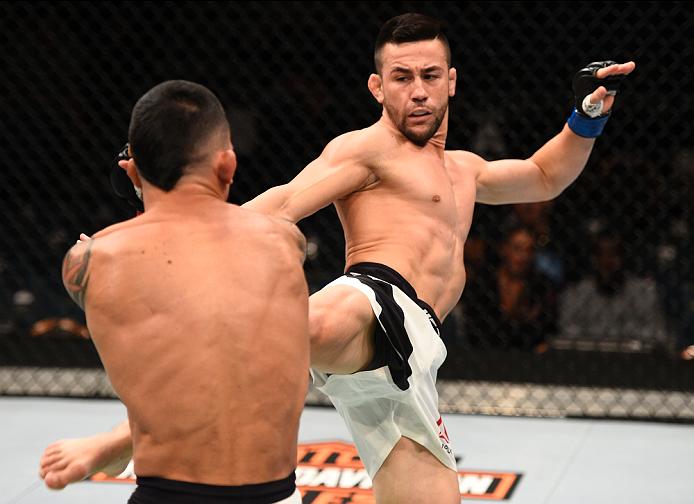 Pedro Munhoz kicks Russell Doane during their bout in July of 2016" align="center" />
For the last two years, the bantamweight division has stood as one of the most competitive and compelling weight classes in the UFC, as established veterans and promising upstarts have regularly turned in thrilling performances with an instant classic or two mixed in along the way.

Coming off a year where the title changed hands twice, a heated rivalry was showcased on The Ultimate Fighter to set the stage for a championship grudge match, and a host of new names cemented their position as contenders in the 135-pound ranks, it’s understandable that someone like Pedro Munhoz has managed to fly under the radar.

Heading home to Sao Paulo, Brazil to compete for the fourth time in as many years, the 31-year-old finisher carries a three-fight winning streak and 14-2, 1 NC overall record into his showdown with fellow unsung talent Rob Font this weekend.

“I think they’re not overlooking me, they’re overlooking us both because we both have impressive victories in UFC,” said Munhoz, who sits one spot ahead of his Massachusetts-based opponent in the rankings at No. 12. “He lost to John Lineker and he won all the other fights by finish.

“I lost to Raphael Assuncao in my debut, which I got on seven days’ notice and, at the time, he was ranked third and it was a decision, and after that, I had two victories, lost to Jimmie (Rivera) in a very close fight and now I have three victories in a row.”

His two setbacks have come against elite competition and after earning a pair of Performance of the Night bonuses for wins over Russell Doane and Justin Scoggins in 2016, he kicked off his 2017 campaign with a lopsided decision win over durable veteran Damian Stasiak.

But with the championship rivalry between Cody Garbrandt and TJ Dillashaw front and center, former champ Dominick Cruz poised to return and the two men to best him still very much in the title picture, Munhoz understands that he’s going to have to bide his time and continue piling up impressive victories in order to break into the upper echelon in the deep bantamweight division.

“I believe I just have to keep doing my job,” said Munhoz when asked how he can stand out in the crowded weight class. “My last three fights – against Russell Doane and Justin Scoggins, I finished Doane in the first round, Scoggins in the second round. Damian Stasiak, he was a very smart fighter, he didn’t expose too much and he was not coming to fight and attacking either, so it was hard to finish that fight.

“I expect (a more aggressive approach) this time from Rob and I hope he’s going to do it,” he added. “We go there to fight, you know what I mean? Every time I step into the cage, I go to die or kill and most of the time, I finish and I walk out with the victory.”

In addition to establishing a little momentum with his three-fight winning streak, the Sao Paulo transplant also points to his move to American Top Team earlier this year as a key piece to helping him crack the Top 10 in the coming year.

After setting up shop in Orange County and training under Master Rafael Cordeiro at Kings MMA when he first moved to the United States, Munhoz opted for a change of scenery prior to his bout with Stasiak earlier this year. While the climates 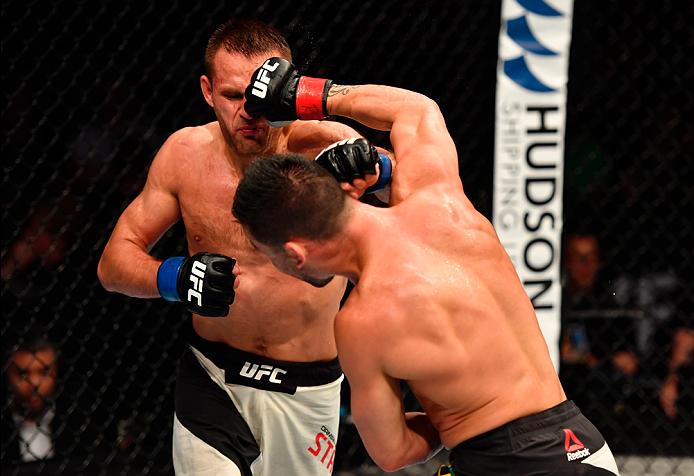 aren’t too different, the 31-year-old believes having everything under one roof at the pristine American Top Team facility and ease that brings are already paying dividends and will continue to produce strong returns going forward.

“Training at Kings MMA was really good, Rafael Cordeiro and I are still really good friends, we have a good relationship and we talk all the time, but I don’t have to drive,” laughed Munhoz, echoing sentiments many athletes who relocate to one-stop shops like ATT have shared over the years. “We have a lot of people in here, different styles, a lot of coaches and a lot of training going on during the day.

“Living close to the gym, I don’t have to drive that much – I can go train in the morning and come back two more times in the day. It’s something really good and something that I didn’t have in California. It feels like the day has more time, so I train and I rest and then I go train again.”

After a successful debut competing under the ATT banner, Munhoz said he is feeling even more settled and even more prepared after his sophomore camp at the South Florida outpost and he expects that to result in another exciting fight and fourth straight victory when he steps into the Octagon at home in Sao Paulo on Saturday night.

“Being here for my second camp, my second fight at American Top Team, every time I get more comfortable and training is easier. I’m well prepared and I want this fight to be a war; that’s what we get paid for.

“I go to fight and I move forward,” he added. “I take a shot to give another shot; there is danger, but it makes for an exciting fight. That’s the way I train and it’s my personality and I won’t change that.

“I’ve been looking forward to hitting him with some good shots, so we’re going to see what the openings are going to be and we’ll take it from there.”