Muhammad ready to put on a show at MSG 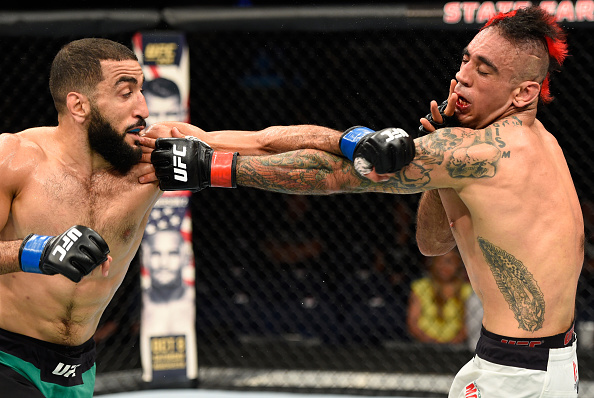 Despite being Chicago born and bred, UFC welterweight prospect Belal Muhammad always wanted to go to Madison Square Garden. Next month, he gets his chance.

“To be in the Garden is one of my bucket list things,” he said. “I always wanted to watch a Knicks game or something inside the Garden because it’s a historic place. I wanted to be there to sit in the audience, but to be fighting there is even bigger. When they called me for the fight, I didn’t even care who the opponent was. It was yes to anybody.”

Marv Albert would be proud.

Fight fans aren’t surprised, though. Since Muhammad said yes to a short notice bout against Alan Jouban in July, he fought Augusto “Dodger” Montano in September and then it was another yes to take on Lyman Good at UFC 205 on November 12. Good was removed from the bout last week due to a potential Anti-Doping violation that caused him to be provisionally suspended by USADA, with Vicente Luque brought in as a replacement.

Muhammad is still here and still fighting at MSG.

“When I was fighting on the local circuit outside of the UFC, I wasn’t getting any calls because nobody wanted to fight me around here on the smaller shows,” he said. “It was so hard for me to find fights, so I had to wait six months, seven months to find a fight, and I was taking long breaks in between, but I wasn’t hurt and I was always training. So now that I’m in the UFC, I’m able to get quick turnaround fights because I’m always in shape, always training and always learning. So why not get paid for it? (Laughs) I love to fight. It’s my playground in there, so when they call me, I’m gonna say yes, no matter what.”

That attitude has made him one of the top newcomers of the year in the UFC, as well as a fan favorite thanks to a style that always sees him looking to put on a fight. Against Jouban, he lost a decision but won a Fight of the Night bonus, and against Montano, he scored a third round knockout. It’s an impressive start, and if he can snap Luque’s three-fight winning streak, he may be looking at a Top 15 opponent in 2017. That’s the long-term goal, but for now, it will be turning the crowd that will likely be in the corner of Luque, a native of New Jersey.

“I like that type of situation where the fans are booing me,” Muhammad said. “I like to make them change their mind. After the Montano fight, they were cheering for me. I put on fights where the fans are gonna like me no matter what. They may hate me at the beginning of the fight, but at the end of the fight they’re gonna respect me and they’re gonna want to cheer for me. So I’m happy with that type of situation.”

As for the next situation, the 28-year-old isn’t just happy to be here. He’s ready to start planning his assault on the elite at 170 pounds.

“After my first fight, it (being a UFC fighter) really didn’t sink in,” he said. “Now it’s starting to sink in and I have to be at the point where I think that I belong. I know a couple guys who made it to the big show and they were like, ‘I made it.’ Then they’ll lose and be like, ‘Well, at least I made it to the UFC.’ I want to be the guy that’s ranked, that’s in title contention and that the fans want to watch. I don’t want to be satisfied with just making it. I’m gonna keep working to the point where once you say UFC, I’m one of the first names you bring up.”