Muhammad Going Back To The Basics

Following a four-fight win streak that had him on the cusp of finally breaking into the top 15 rankings at 170 pounds, Belal Muhammad suffered a major setback with a loss to Geoff Neal in January.

It was a particularly disappointing outcome because Muhammad was ultra-confident heading into the matchup but, in the end, he came away on the wrong end of a unanimous decision defeat.

In the aftermath of that fight, Muhammad almost had to undergo the five stages of grief to get past the loss. At first he was in denial, then he turned to anger before the string of emotions finally settled on acceptance when he realized where he went wrong.

“After a loss, a million things run through your head,” Muhammad explained. “You can sit there and say did I just have an off-night? Did I do anything wrong? Did I not train hard enough? But I did everything right for that fight. I trained hard.

“I literally had to go back and think, did his coaches go back and see something in my tape that they saw I was doing wrong, little stuff that I need to switch up and fix? I went out there and I didn’t perform the way I wanted to. I overthought a lot of things. I’m not going to sit there and take anything away from him. He fought a great fight.”

The examination of his performance ultimately led Muhammad to one major revelation and that was the way he approached the fight.

Rather than going out with a mindset focused on getting the win by any means necessary, Muhammad got lost in gunning for the finish in an ill-fated attempt to get the rest of the welterweight division to notice his performance.

“I need to go back to what got me here — the basics,” Muhammad explained. “I’m the type of guy where I want to do something crazy to get the fans to want to watch me but I feel like I’m the kind of guy where I always put on performances where people want to watch me, regardless, because I put on good fights.

“I’m not going out there to lay and pray or just hold on or just be a boring fighter. I’m always putting on exciting performances, but I went out there thinking ‘I just had four decisions in a row, I need to go out there and try to finish his guy and have a spectacular knockout.’”

It backfired in the worst way possible but the loss still served a purpose for Muhammad going forward into his next fight against Curtis Millender at UFC 236.

He realized that he can’t fight to please everybody else when his job description really begins and ends with one goal in mind — winning.

“My goal is to win gold and be unstoppable. So these losses are going to make me go back, fix what I’m not doing right and I feel like I did that and I’m going to go out there and show up for this fight.”

In many ways, Muhammad is facing a fighter this weekend who went through a similar ordeal coming out of his last loss as well.

Millender was on a nearly identical winning streak while making his way up the ranks in the welterweight division before he fell to Elizeu Zaleski dos Santos by first-round rear naked choke in their fight in early March.

Despite everything he accomplished up until that moment, Millender was suddenly discounted because of his emphatic defeat and Muhammad can sympathize with him in that regard after suffering through the same doldrums recently. 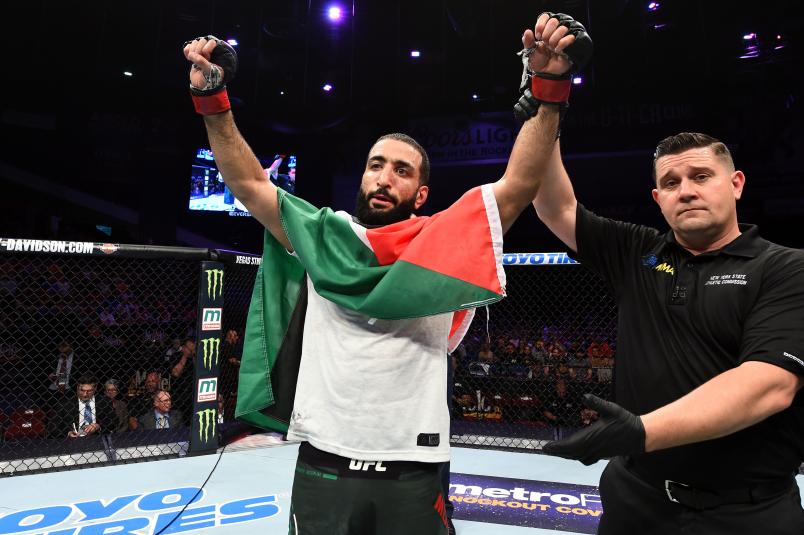 “It’s funny. When you’re winning everybody loves you and then you lose one and everybody thinks you suck,” Muhammad said. “It’s crazy because the same thing just happened to him. People are saying, ‘oh you can take him down, he has no wrestling’. The kid was just at a point where people thought he was a great up and comer, he was the co-main event and he lost to a guy on a six-fight win streak. People just threw him away like this guy sucks.

“This guy is tough. He’s tough everywhere and I’m happy about this fight. He’s just coming off a loss and he was co-main event and I think I can get right back to where I was by beating him and getting that momentum going again.”

While Muhammad’s goal to one day challenge for UFC gold is never going to change, he’s no longer getting lost in the peripheral details that don’t affect him ahead of any fight.

The only thing on his mind right now is beating Millender on Saturday night and he’ll worry about everything else once that job is completed.

“Millender is an exciting fighter, he comes to fight all the time and those are the kinds of fights I want to be in. I want to be in the fights where fans go, ‘that’s going to be an awesome fight’. That’s the kind of fight I want to be in.”