Much More To Achieve For Marshman

"I was the first Welshman signed and I've been around for a long time, so I'm at that stage. I'm quite happy with what I've achieved so far, but I honestly think I've got a lot more to achieve."
By Thomas Gerbasi • Jul. 3, 2019

John Phillips was a tough opponent for Jack Marshman. But after “The Hammer” defeated his fellow Welshman in their March bout in London, he had to face tougher opposition in the form of his superiors in the British Army, who told Marshman that leaving to fight in a UFC bout that weekend was out of the question.

Marshman went anyway. As for his return on Monday…

“I basically got a formal warning,” he said. “But we sorted it out.”

It was an odd matter for the Abertillery native to deal with, especially since his entire pro MMA career was fought with practically no issues while he was in the Army.

“It's weird, man,” said Marshman. “It only came up in the last few months. I had my pro debut in 2010, so it's almost ten years I've been fighting professionally and it's only the last few where the Army have sort of turned their back on it. I've done my whole professional career whilst being in the Army, so it's a strange situation. The British Army are not clued up on MMA, as it's a newer sport in this country. If I was a professional boxer, I'd be looked after in the Army and I could do what I want. But unfortunately they're not up to date with MMA just yet and it will probably happen when I'm out.”

Considering that Marshman’s last day as a member of the 3rd battalion – parachute regiment is this Friday, July 5th, that’s a given. Luckily, there will be no issues when he steps into the Octagon the next day to face Edmen Shahbazyan, even though he will miss any going away parties back home. 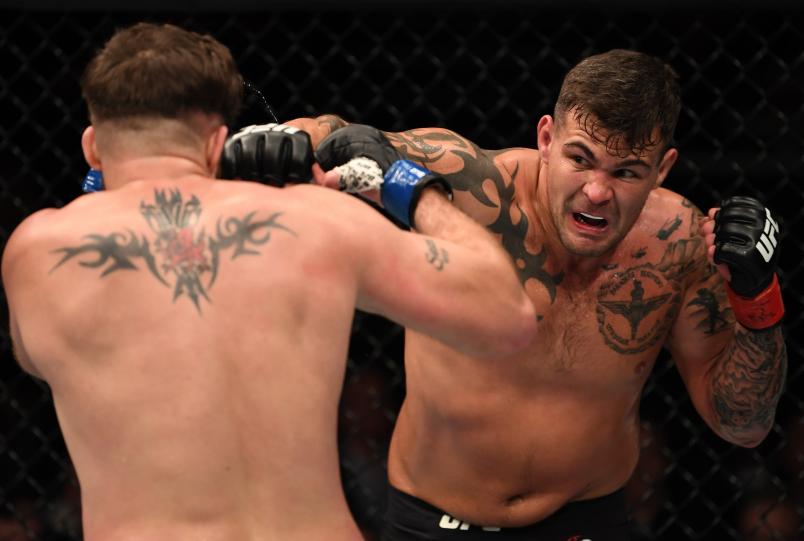 LONDON, ENGLAND - MARCH 16: (R-L) Jack Marshman of Wales punches John Phillips of Wales in their middleweight bout during the UFC Fight Night event at The O2 Arena on March 16, 2019 in London, England. (Photo by Jeff Bottari/Zuffa LLC/Zuffa LLC via Getty

“I'm sure there's one in Vegas, I think,” laughs Marshman, who can soon call himself a full-time fighter after 31 pro bouts. And what better way to celebrate than with his first bout in the “Fight Capital of the World”? But the 29-year-old is trying to approach this as just another fight.

“Obviously, it's the big one, and everyone wants to fight in Vegas, but I've fought in Madison Square Garden and this is my seventh fight in the UFC, so I've done all the big shows so far and fought all over the world, so it is just like another fight for me. But it is nice to be on a big card in Vegas. It's pretty good.”

It’s perfect timing as well, as Marshman begins the next chapter in his career off perhaps the most important win yet. No, his split decision victory over Phillips didn’t light up London or end the way his Performance of the Night knockout of Magnus Cedenblad in 2016 did. But what it did was show the evolution of his fight game as he opted against a brawl with his countryman in favor of a disciplined 15 minutes of work.

“I think so because obviously I do get involved in brawls a bit too much, I know that, and I'm a big puncher myself,” Marshman said of this being his most important victory. “But I was in there with another really big puncher and I knew the only way he could beat me is by landing a big shot on me, but I could beat him by moving around and outboxing him, so I was going to play my game. Me fighting a smart fight is probably the first time I've gone down that road in a fight. (Laughs) Sometimes I get too involved in the fight because I'm enjoying it, but I need to win. That's the important thing.”

The victory evened Marshman’s UFC record at 3-3, and while that slate is proof of the reality that he’s had some ups and downs, he hasn’t been in with cupcakes either.

“If you look at my opponents, I've not had an easy run in the UFC,” he said. “The first guy I fought (Cedenblad) was 4-1 in the UFC, then I fought Thiago Santos and Antonio Carlos Junior. But I've been there in every single fight I've had.”

Now he just needs to start winning those close ones on a consistent basis, and that’s what he did against Phillips. Next on the hit list is the unbeaten Shahbazyan.

“I turned a corner in my last fight and I'm very confident in my next fight,” he said. “I've game planned again, which is good for me, and I'm confident I'm gonna get that win. I feel like because my opponent's coming off the Dana White Contender Series, the UFC have backed him a little bit more than me, but I feel as soon as I go in there and beat the guy, I think the UFC will have no choice but to start giving me that backing as well.”

And in Marshman’s eyes, that backing includes a UFC visit to Wales, home to not just Marshman and Phillips, but Brett Johns and newcomer Jack Shore.

“It (MMA) is already massive in Wales,” he said. “We've got four fighters in the UFC, and we're gunning for a card. That's what everyone wants in Wales and with the amount of good gyms producing good talent in Wales, we deserve a show. But we need one of us to take the frontrunner spot. I get a good win now in Vegas and maybe another good win they'll start looking to bring a Fight Night here.”

So Marshman is cool with possibly becoming the Welsh MMA version of boxing great Joe Calzaghe, who just happens to live five minutes down the road from him?

“I'm happy,” he said. “For a few years I've really been pushing at the front of what's going on. I was the first Welshman signed and I've been around for a long time, so I'm at that stage. I'm quite happy with what I've achieved so far, but I honestly think I've got a lot more to achieve.”