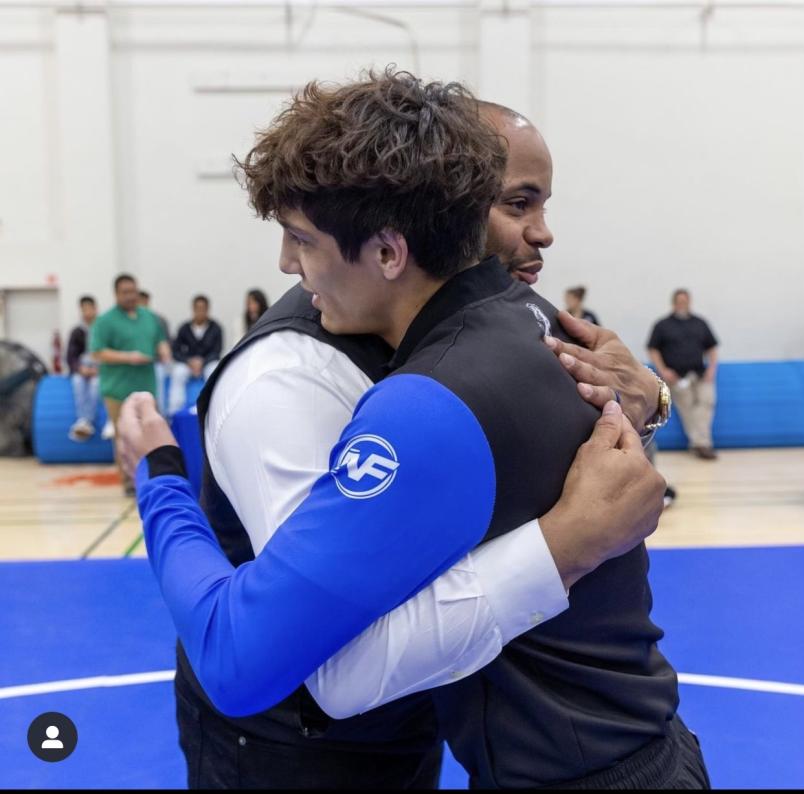 Leave it to DC to have a college student at Michigan State walk around with the nickname “Mrs. Makhachev.”

When Chase Saldate moved to Gilroy, California in seventh grade, a grown child down the street with an infectious energy and passion for sports became one of Saldate’s role models. As it would turn out, the neighbor would be future UFC double champ Daniel Cormier.

“I was never a UFC guy or an MMA guy,” Saldate laughed. “I didn’t even know who he was. I had never been to AKA, and then after a couple weeks of living there, my dad talked to him a few times and mentioned that I’m a wrestler. DC was like, ‘Hey, you should come wrestle at AKA; just come with me.’ Then twice a week he would drive me up there and I would work out.”

Saldate quickly learned of Cormier’s title challenger status in the UFC, but he still looked at him as his coach and neighbor who happened to be in the UFC. It wasn’t until he was invited to watch Cormier fight in person at UFC 214 that he was swept up in the enormity of who his neighbor was.

“I was at the fight in person and I thought, this is insane,” Saldate recalls. “The next day I’m a huge MMA fan. Now I’m watching as much MMA as I can and I’m keeping up with everything. I pretty much left all the other sports and I only watched UFC and wrestling.”

While he officially ditched every other sport, that doesn’t mean Cormier was ready to give up Saldate’s seemingly daily beatdowns on Cormier’s driveway basketball court.

“He would come knock on my door and say, “Hey, come play basketball with me,’” Saldate said. “He would just destroy me. He’d start dunking on me and everything. I want to say the hoop was six or eight feet. It was low. I can reach my hand up and touch the rim now. He don’t jump; he can’t jump very high.”

The potential Cormier saw in Saldate as a wrestler, student and as a person quickly became more and more apparent. He was still the goofy kid down the street DC would enjoy posterizing, but on the wrestling mat he was being treated as much more.

Saldate would get his reps in at school with high schoolers, but Cormier began hyper focusing on the high schooler when they would go train on the AKA mats.

Saldate would begin training with UFC talent and not just any UFC talent, but the most feared grapplers in the history of the sport, and on occasion the training sessions would go viral… And by viral, we mean Tony Ferguson talking about it at press conferences viral.

“I don’t think many people know me as, ‘The DC Kid,’” Saldate explained. “People know me as the kid who wrestled Khabib or Islam. That’s where a lot of people have seen me. There’s videos of me wrestling Khabib a bunch of times and him beating me up before his Tony Ferguson fight the last time they were going to fight. Then Tony was talking a bunch of crap to Khabib like, ‘Oh you beat up a high schooler!’ That was about me.”

Criticism for Nurmagomedov poured in as a result of Ferguson shedding light on the video. Before he knew it, high schooler Saldate was being volunteered to wrestle Ferguson by Nurmagomedov himself.

Why just get a decision in your Spartan debut when you can get a PIN!?!?

As highly as Saldate speaks of the wrestling of Cormier and Khabib, he’s also had his share of run-ins with Islam Makhachev, as well.

In the middle of wrestling practice,, Saldate found himself in yet another David vs Goliath matchup against Makhachev. Never giving an inch despite the mismatch, Saldate went viral yet again when Makhachev put the high schooler to the mat with a Russian Tie Snap that had the entire gym hooting.

Cormier would play the move back to the whole gym and appoint Saldate the nickname, “Mrs. Makhachev.”

The future Spartan shrugged it off and found the humor in the moment but paid it forward when he hit the same exact move in a wrestling tournament that featured other high schoolers, and not ranked UFC fighters.

“It’s all fun and games,” Saldate said. “The only way to get better was to get beat up, but it wasn’t personal. I’ve known them for a while; we’re boys and that’s how people are. They mess around. To this day, if I get in on Khabib’s legs or somebody, I’m talking crap right after. ‘Oh, I got in on Khabib’s legs! I don’t know, I may take him down!’ It’s definitely not the bully scenario which I’ve seen some people comment.”

Everything Cormier, Makhachev and Nurmagomedov have done has paid off so far. Although DC wasn’t able to convince Saldate to go to the most hallowed of grounds in NCAA wrestling, Oklahoma State, everything else he’s done has shaped Saldate for the better.

Although Saldate is much, much smaller than Cormier, don’t be surprised to see him follow in the footsteps of DC. As far as he’s concerned, that’s been the plan for quite a while now.

“I know that it takes a long time in the fight game but I’m in no rush. I’m a young kid,” Saldate said. “I know that once I can go back to Gilroy, I can focus on that. Even though I have to look forward to wrestling first, I know in the back of my head that I’m going to fight.”

Sign up for UFC FIGHT PASS TODAY to relive all of the best moments of Makhachev, Cormier and Khabib TODAY, and don’t miss the return of Islam Makhachev as he takes on Dan Hooker at UFC 267, Saturday, October 30.