Mr. Lytle Goes to Washington? Not Yet, There's Business in Milwaukee

"It’s not necessarily to say I’m just gonna stand here and let you punch me and me punch you, but it’s to end the fight as soon as possible and as dramatically as possible." - Chris Lytle 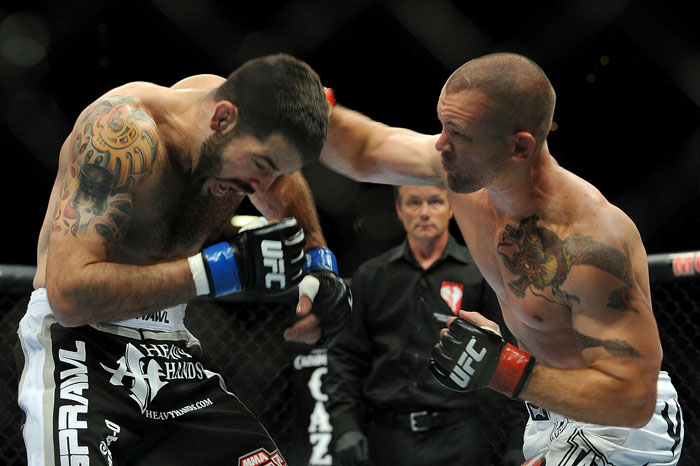 Chris Lytle is mad and he’s not gonna take it anymore. No, the welterweight veteran and king of the post-fight bonus hasn’t decided to go against everything he’s been all the years in order to begin a war of words with his opponent this Sunday in Milwaukee, Dan Hardy.

But the Indiana native does have a desire to help straighten things out in his home state, hence his recent announcement that he’s looking into running for office in 2012.

“If you look at what I do, I’m also a firefighter, and the reason I do that type of thing is I have a desire to better my community and it gives me a good feeling at the end of the day when I know I’ve been able to help out people,” he explained. “I look at the way things are going here, and I see a lot of problems and I think they’re gonna get worse and not better. I know the thing is to be optimistic and hope, but when you look at the facts, I don’t see that being the case. I have four children, and I want things to be better for them, especially where I live, so I figure I can complain about it or try and do something about it, and I think I have the ability to do something about it, so I’m gonna try to.”

Of course, you have to wonder why a nice guy and solid citizen like Lytle would want to get involved in a dirty game like politics. When asked what the reaction’s been to the news that he’s thinking of taking that step, he chuckles.

“They’re reacting probably like I would have five years ago,” he said. “They say ‘why would you want to get involved with that?’ To be honest with you, my idea of a politician is not good. When I think of one, I think of a used car salesman. I see how that business goes, and I don’t like that type of stuff, the politics of how you have to play ball to get this or that. I don’t like the sound of that, and it will be a little different. In the UFC, even the guys I’m getting ready to fight tend to be nice to me and they’ve liked me. And I feel like I’ve got a good reputation for having integrity, but no matter what, when I get involved in politics, from Day One a lot of people aren’t gonna like me. It’s gonna be different, and I understand that, but I’m not thinking I’m going to do this to better myself or increase my stature. I’m just doing this because I feel like we’re gonna have some big problems here and I think I might be able to help out.”

For that reason alone, you’ve got to give Lytle a lot of credit for being the kind of man willing to step up and do something as opposed to just complaining about it. But that’s a backburner issue at the moment, considering he’s going to have Hardy throwing haymakers at his head Sunday in the UFC Live main event. And that’s fine with him, as over a decade as a pro and 62 fights have not dampened his enthusiasm for the best part of the MMA game – the fight.

“That is the fun part for me,” he said. “That’s really the payoff and the part I enjoy. I can usually do a good job of pretending nobody else is there, I’m not being watched by anybody, and I’m just in there with that one person, and we’re just fighting.”

Few reveal that joy in the Octagon quite like Lytle, and his eight post-fight awards prove it. But in his most recent Fight of the Night award winner – a February loss to Brian Ebersole at UFC 127 – the thrill wasn’t there like it usually was, and you could hear it in his voice as soon as he was informed that his original opponent that night, Carlos Condit, was injured. Stepping in was the veteran Ebersole, owner of a completely different tool set than Condit. Lytle, who was battling through some training camp injuries, but who expected to be able to at least fight a three round standup fight, now had everything upended.

“I had some injuries that I was trying to deal with and the way I was looking at it was well, fighting Carlos he’s not gonna really try and take too many people down,” said Lytle. “And I’m not trying to take anybody down, so it was gonna be a standup fight. And I could do a standup fight. The month, month and a half leading up to the fight, I didn’t do any wrestling or any grappling. Then a week and a half before I left, they called with Ebersole – a college wrestler who doesn’t stand up, and he’s never been knocked out. This is a little different fight for me now. That week, four days in a row, I went in to do wrestling and grappling. But I can’t get in that kind of shape in four days.”

Lytle was Lytle on fight night though, and until he got rocked by an Ebersole knee, the fight was still up for grabs. The unorthodox and crafty Ebersole went on to take control, earning a unanimous decision win. Looking back, Lytle, who saw a four fight winning streak snapped that night, wonders if he made the right call to still take the fight. Nah, you know if he had to do it all over again, he’d do the same thing.

Even if he’s earned the right to turn down a replacement opponent at this point in his career?

“It’s not that the UFC would say something,” he said. “I would know and it would be in my head that I said no. It would be me that turned it down and be my feeling that I was not confident in myself for that fight. And I can’t live like that.”

It’s precisely the reason why when Hardy looked for an opponent to face after three consecutive losses, he asked for Lytle. Not because he thinks the 37-year old is an easy mark, but because he’s a fighter, and he will always come to fight. And considering Hardy’s last loss to Anthony Johnson in what turned out to be a 15-minute wrestling-based affair, “The Outlaw” is craving a good ol’ fashioned slugfest.

“I’ve been to where he was and he was frustrated,” said Lytle. “He just wanted to stand up and put on a good fight and throw down, and he got somebody who wanted to hold him down for three rounds and grind out a victory. I know that frustration level, I’ve been there and I understand that, and that’s more or less my goal too. It’s not necessarily to say I’m just gonna stand here and let you punch me and me punch you, but it’s to end the fight as soon as possible and as dramatically as possible. I want to go out there and win the fight quickly. I’m not gonna go out there and say ‘I’m gonna take him down and grind this sucker out.’ I’ll never try and do that. I’d rather go out there and try to knock him out and get knocked out than try to grind it out.”

Hardy shares those sentiments, and with his job possibly on the line, he’s going to be bringing everything he’s got to Milwaukee. Lytle will do the same, and that’s why this is a main event.

“I feel a great sense of honor with the fact that the UFC has made us the main event and they did that for a reason,” said Lytle. “They did that because of my past performances and his past performances. I don’t feel like me going out there and saying ‘I’m gonna play this bad boy safe and I’m gonna manage this fight and get the W,’ is why they want me to be the last fight. And that’s not what they’re going to get. If that was what would happen, I would be sorely disappointed with myself and I’m not gonna let that happen.”

Chris Lytle is going to fight on Sunday. After that, who knows, maybe he’ll add politician to his jobs as a fireman and prizefighter. If Manny Pacquiao can do it, why can’t he?

“Exactly,” he laughs. “Next thing I’m gonna be doing is singing.”