Ever since Gegard Mousasi suffered a TKO loss to Uriah Hall, he's been gunning for a rematch, and now he'll get his chance, as the two middleweight contenders face off for a second time in the UFC's return to Belfast, Northern Ireland this weekend.

Mousasi got the fight with Hall after a dominant performance over former champion Vitor Belfort at UFC 204. The fight will serve as a chance for Hall to get another win over a top ranked opponent following a disappointing outing in his last bout against Derek Brunson.

In today's fantasy preview, we're going to examine some of the key fights coming up on Saturday for UFC Fight Night: Mousasi vs. Hall 2.

There may not be a more regrettable loss on Gegard Mousasi's record than falling to Uriah Hall the way he did when they first met in 2015. After a dominant first round, Mousasi made the mistake of walking into a spinning back kick from Hall that landed flush on his jaw. The flashy strike ultimately led to the end of the fight as Hall picked up the biggest win of his career in the UFC. It was definitely an upset back then, but can Hall make lightning strike twice?
RELATED: Watch Mousasi vs Hall Part I | Free Fight - Mousasi vs Santos | UFC Breakdown - On the Mat

Hall certainly has a path to victory, which includes a strong counter striking game and never allowing Mousasi to bully him around the Octagon. Hall is the quicker fighter on the feet and he certainly has a huge arsenal of strikes, but his problem has often been not letting go and unleashing those weapons on his opponents. If Hall can avoid being gun shy, he can certainly put together the kind of combinations on the feet that could frustrate Mousasi and eventually hurt him. Hall has shown good footwork in the past, so he needs to stick and move while peppering Mousasi with strikes any time he gets overly aggressive.

That being said, Mousasi has looked better than ever since dropping the bout to Hall. He mauled Vitor Belfort in his last fight and that came after he absolutely destroyed Thiago Santos, who might be one of the most underrated strikers in the middleweight division. Mousasi has knockout power in both hands and he's put together punishing performances recently that could give Hall nightmares by the time this fight reaches the second or third round. Of course, Hall still has that ultimate equalizer if he can land a surprise kick like the last time, but otherwise, this is Mousasi's fight to lose.

Look for Mousasi to come out and go after Hall as soon as the referee says go and it's hard to imagine him letting up on the pressure until he finally lands a TKO, earning redemption from his last fight with the former Ultimate Fighter finalist.

Prediction: Gegard Mousasi by TKO, Round 3

Expect a fun striking battle in this battle of lightweights, as Ross Pearson looks to bounce back from two consecutive losses while taking on Scottish slugger Stevie Ray in the co-main event. Throughout his UFC career, Pearson has faced nothing but the best of the best, and while he's suffered through a couple losses recently, he remains one of the grittiest and toughest matchups for anyone in the lightweight division.

Pearson is best known for his boxing, which is exactly what Ray typically does in his fights as well. Pearson actually lands with a slightly better volume while Ray counters with his accuracy percentage points better than his British opponent. Based on recent performances, Ray has shown better stopping power with his punches, but that could potentially get him into trouble with someone as dangerous as Pearson is over three rounds.

Ray has looked very solid thus far in his UFC career, but this is a big step up in competition considering the resume Pearson has put together over the years. Pearson is a very active fighter with technically sound boxing skills, good conditioning and the ability to punish his opponents for 15 straight minutes without ever really slowing down. Ray won't go away easy by any means, but he may be eating two strikes for every one he lands on Pearson during their exchanges. Pearson's clean combinations should land more effectively throughout and ultimately lead him to victory on the judges' scorecards.

When you get two heavyweights together for a fight like this, anything can happen, and that's a pretty accurate prediction for what should unfold when Tim Johnson meets UFC newcomer Alexander Volkov. Johnson has been a pleasant surprise ever since he arrived in the promotion and he's just recently cracked the top 15 in an ever expanding division.

Volkov is a tall, powerful heavyweight with explosive hands and a very slick ground game to match. He is also a prolific finisher, but he has gone to some very close decisions in the past as well, so he's got a gas tank to go all three rounds if necessary. Volkov will enjoy a four-inch height advantage over Johnson, so using that reach and size will be paramount for the Russian UFC rookie to land combinations and keep the American on the end of his punches.
ALEXANDER VOLKOV FEATURED IN BELFAST ON THE RISE

Meanwhile, Johnson is a slugger with a ton of knockout power and unbelievable will inside the Octagon. Johnson is tough as nails and he won't go away easy, no matter what Volkov hits him with. That kind of durability is a huge plus in a heavyweight division where one punch often changes the entire course of a fight. Johnson will also mix in takedowns to round out his strategy, so he certainly has enough weapons to keep Volkov guessing.

It's always tough to predict how a heavyweight fight will play out, but given Johnson's experience and power coupled with it being Volkov's first time in the UFC, and the edge goes to the American to find an opening and put this one away before the final bell.

Prediction: Timothy Johnson by TKO, Round 2

It's been a long time coming for Ian McCall to finally get a fight after his last two opponents have dropped off a card just days away from stepping into the Octagon. Due to those late notice changes, McCall has been forced out of action without any fights since early 2015. This time around he gets Irishman Neil Seery, who is a remarkably tough competitor with good hands and a never say die attitude.

On paper, McCall should be a solid favorite in this matchup, considering his hands are very good and he's always got the takedown to fall back on if things get dicey on the feet. Seery is best known for his striking, so McCall's ability to mix it up and put him on the ground could be a great way to keep his opponent guessing over three rounds. McCall is typically a fast starter as well, so that should help him knock off the ring rust early and put Seery on the defensive immediately.

What McCall needs more than anything is patience over this 15-minute battle because no matter what he does, it's not likely Seery will go away. It's been nearly five years since Seery was finished in a fight and he's never truly been put away by strikes throughout his entire career. The Irish crowd will certainly add to Seery's excitement, but McCall still has more weapons and more ways to win over three rounds.

Teruto Ishihara has become one of the most enjoyable fighters to watch in recent months and he'll look for another show stopping performance in Belfast. Training out of Team Alpha Male in Sacramento, Ishihara works alongside some of the best fighters in the world and he's also got a wealth of personal experience under his belt as well. Ishihara is a highly unorthodox fighter with a ton of power in all of his strikes. 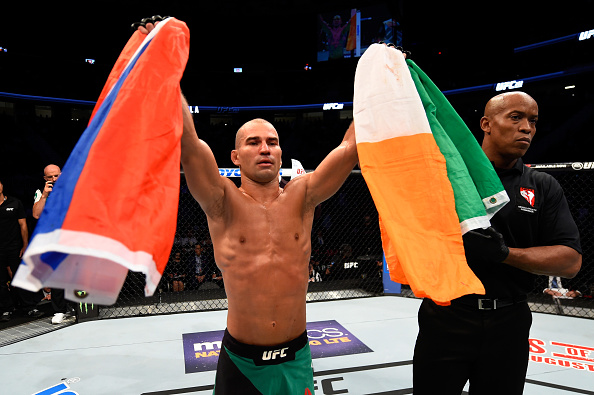 ARTEM LOBOV FEATURED IN ON THE FLY

Now Lobov is certainly no pushover, but he hasn't shown anything overly tremendous since joining the UFC by way of The Ultimate Fighter. On the reality show, Lobov was a finishing machine, but since venturing into the UFC, he's had far less success. It probably won't get much better for Lobov in this fight with Ishihara.

Look for Ishihara to try and frustrate Lobov with his movement early before uncorking big combination after big combination until he either gets the finish by TKO or beats up the Russian-born featherweight for all three rounds.

Prediction: Teruto Ishihara by TKO, Round 3

There's no shame in Anna Elmose making her UFC debut and losing a lopsided fight to someone as good as Germaine de Randamie. After that fight was finished, Elmose dropped two weight classes for her upcoming fight in Ireland against former Ultimate Fighter competitor Amanda Cooper. Prior to that loss, Elmose was 3-0 with all three fights being finished by knockout or TKO. It's an impressive showing, but that might get her into trouble with someone like Cooper in this matchup.

Cooper didn't get to show much in her trip to The Ultimate Fighter finale when she ran into a human buzzsaw named Tatiana Suarez. Still, Cooper is much better than what she showed in that performance. Cooper is a very strong boxer with incredible tenacity on the feet or on the ground. Cooper seems like a solid prospect to watch for the future at 115 pounds and this could be the perfect showcase for her to prove it.

While both of them have just a handful of professional fights, Cooper has simply faced better competition, especially when adding her time on The Ultimate Fighter to her resume as well. Cooper has also been spending a lot of time alongside top-ranked women's bantamweight star Julianna Pena to get ready for this fight, and she should be able to earn her first UFC win while handing Elmose her second straight loss inside the Octagon.

If there's one fighter on the card to keep a close eye on, it's Dagestani prospect Magomed Mustafaev, as he takes on American Kevin Lee. Lee is certainly a tough customer with a very heavy top game if he can get this fight to the mat, and underrated boxing skills on the feet as well. Lee seems like the kind of fighter who could be knocking on the door of the top 15 at any point in the near future, but Mustafaev might just take his spot with a win this weekend.

Mustafaev is not only a former freestyle wrestler out of Russia, but he's also a knockout striker with a world-class team helping him to get better and better. Working alongside some of the best fighters in the world at American Top Team, Mustafaev continues to add more weapons to his already deadly arsenal and he'll look to unleash them against Lee this weekend.

Make no mistake, Lee is a serious threat to take Mustafaev to his first decision while also handing him only the second loss of his career. Lee is a rangy power puncher with great wrestling to compliment his overall game. That being said, Mustafaev has the grappling to match Lee move for move on the ground, and his striking on the feet is absolutely nasty. If Mustfaev can catch Lee coming forward with an aggressive combination, he might just earn his 15th professional stoppage.

Prediction: Magomed Mustafaev by TKO, Round 2