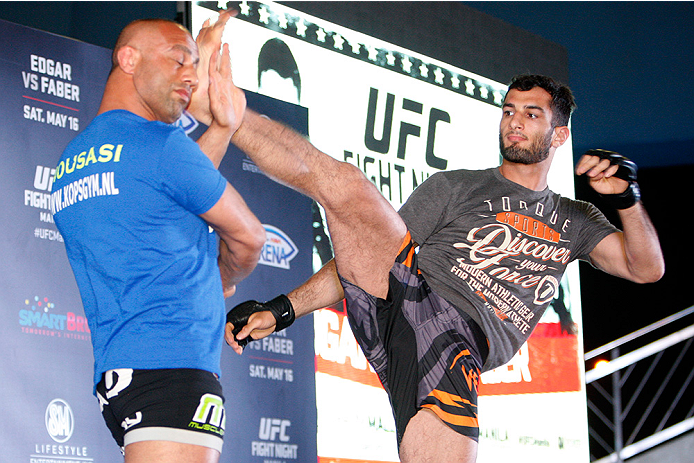 Due in large part to an elusive style that makes him a difficult target for his opposition to find on fight night, Gegard Mousasi remains one of the biggest stylistic riddles to solve in the middleweight division.

The former Strikeforce light heavyweight champion has become a perennial threat to the 185-pound title under the UFC fold, and has faced a consistent wave of top-tier competition during his time on the premier stage in mixed martial arts. While he has found mixed results ,winning three of his five showings inside the Octagon, looking at his overall body of work in the UFC proves to be a better gauge for a fighter who has been historically tough to categorize.

The Netherlands veteran’s victories have come over a collection of notable names and former title challengers, and those descriptors would also apply in the bouts he’s been defeated. The 29-year-old striker has notched wins over Ilir Latifi, Mark Munoz and, most recently, former two-divisional pride champion and former middleweight title challenger Dan Henderson, with Mousasi scoring lights out performances en route to claiming victory.

In a telling turn, the two losses he’s suffered have also come against a pair of former champions and current contenders in Lyoto Machida and Ronaldo “Jacare” Souza. Mousasi went toe-to-toe with “The Dragon” in a five-round battle back in February of 2014, then was eventually overwhelmed by Souza’s submission game in the third frame of their tilt seven months later down in Brazil.

Mousasi would rebound to score a first-round stoppage victory over Henderson when the UFC returned to Sweden in January, in a fight that served to keep his footing in the divisional upper tier at 185 pounds. Furthermore, his performance in Stockholm appeared to be the culmination of a journey through the proverbial fire, where his run of competing against the upper echelon of the weight class provided knowledge and experience alike.

The well-rounded veteran has shifted into a different gear in his mixed martial arts career - one where the internal calm meets the easy demeanor he’s become notorious for.

“I’m very focused on my fight and everything feels like it is falling into place for me,” Mousasi said. “I have no stress and I’m relaxed because I have done everything I need to do in order to get ready. I’m still working to improve my skills and I am getting better with every training session. I’ve been fighting for a long time now, and at 29, I’ve become more mature in every aspect of my life. This is especially true with my career. In doing so I’ve also gotten a lot stronger mentally, and all of those things add up to make a difference.”

As Mousasi’s inner-peace continues to grow, so does his confidence in his ability to perform when the Octagon door closes on fight night. More than a decade of experience competing on stages around the globe has meshed to build his physical talents, just as a constant push to evolve his approach in the training realm has allowed him to continue to grow in areas that will strengthen and support his skill set.

In this realm, Mousasi credits his team of coaches and trainers for never resting on their laurels and pushing him to progress in all areas of his MMA game. Mousasi believes his skill set is growing stronger with each and every fight and he plans to put his expanded talents on display when he faces Costas Philippou at UFC Fight Night: Edgar vs. Faber this Saturday when the UFC makes its debut in The Philippines.

And while he’s aware of the dangers the New York-based slugger will bring to the table, Mousasi is his usual brand of calm heading into the event. He thinks the versatile arsenal he will unleash will be more than Philippou can handle, and he’s excited to put that theory to the test on Saturday.

“[Philippou] is a heavy-handed guy with good stand-up and knockout power,” Mousasi explained. “I have to be careful in the exchanges but I believe I have the advantage everywhere this fight could go. I believe I can do anything I want in there and that is going to show on fight night. I am very good at spacing and closing the distance. I believe that will be a problem for him.

“I am confident I did everything right throughout my training camp and my preparation for this fight. I have a great team and we made sure to take all the right steps to make sure I’m ready. That said, feeling great is a good thing, but it all comes down to my ability to perform on fight night. It doesn’t matter if the fight lasts one round or the full 15 minutes; I will be ready. I am confident I am going to be the one with his hand raised at the end of the fight. All I have left to do is cut a little bit of weight then go out there and get the victory.”

In addition to his eagerness to return to the chaos-filled environment of competing inside the Octagon, he’s also excited for the opportunity to fight in Manila. The Netherlands-based fighter has spent the majority of his career competing on international stages, and has been a key player in the UFC’s push for global expansion over the past three years.

In fact, one would be hard pressed to find another competitor on the current UFC roster who has more international experience than Mousasi, and he’s thrilled to add the Philippines to the growing list of stops in his MMA career.

“I am very happy to be fighting in Asia,” Mousasi said. “This is my first time fighting in Manila and I’m very excited to get the opportunity. There are a lot of fight fans here and everyone has been friendly and hospitable.”