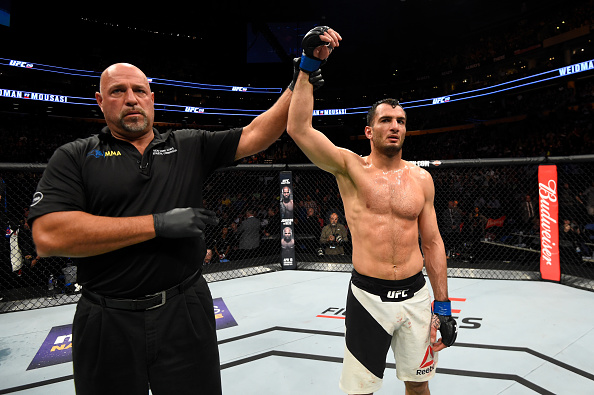 What was shaping up to be an intriguing UFC 210 co-main event ended in bizarre fashion Saturday night at KeyBank Center in Buffalo, as confusion over knees landed by Gegard Mousasi on Chris Weidman led to a second-round TKO win for Mousasi and a third consecutive loss for the former UFC middleweight champion.

With new rules implemented in 2017 regarding knees and kicks to the head of a downed opponent, Mousasi landed two knees in the second round as Weidman attempted to put both hands on the canvas. If both hands were on the mat, the blows would have been illegal, but replays showed that the first knee was clearly legal, and that Mousasi lifted Weidman as he landed the second knee, taking the New Yorker’s hands off the mat. Referee Dan Miragliotta initially ruled the knee illegal, giving Weidman five minutes to recover and calling in the Octagonside physicians in to check on him. Told that the knee was legal, Miragliotta still gave Weidman time to recover, but the doctors waved the fight off as the Long Islander protested, but to no avail.
WATCH: Mousasi and Weidman react in the Octagon

Up until that point, Weidman looked to be in top form, with his first takedown attempt hitting paydirt. And while Mousasi nearly got caught in a 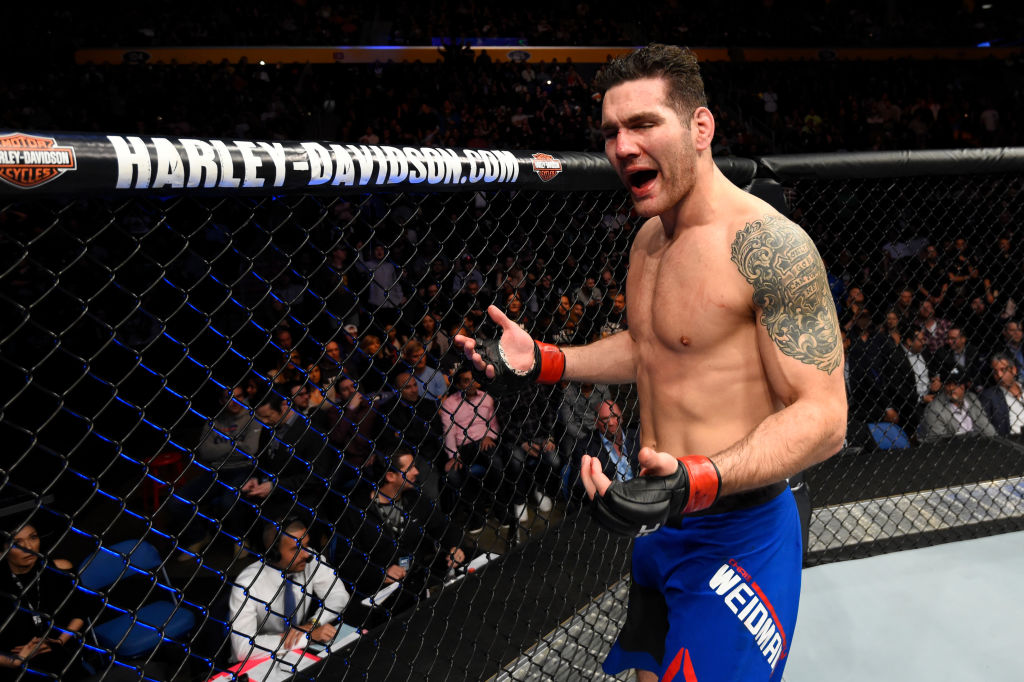 choke in a subsequent scramble, he got back to his feet quickly. Midway through the round, Weidman put Mousasi on the deck again, but once more, the Netherlands veteran didn’t stay there long, and he held off Weidman’s third attempt. With a little over a minute left, Weidman briefly staggered Mousasi with a punch upstairs, capping off a big round for the New Yorker.

Mousasi opened up the second with a hard shot to the head and then opened up with both hands as Weidman covered up. Mousasi surprisingly looked for a takedown but didn’t get it, with the now bloodied Weidman getting a takedown of his own. Midway through the round, Weidman got the mount, but Mousasi was able to scramble his way out of trouble and back to his feet. Then Mousasi took over with the two knees to the head, but it was after several confusing minutes before he could officially claim victory at the 3:13 mark of round two.

It’s two UFC fights and two submission wins in the space of a month for unbeaten strawweight Cynthia Calvillo, who put together another impressive effort in forcing Octagon newcomer Pearl Gonzalez to tap out in the third round.

Calvillo had a big first round, as she outworked Gonzalez throughout, bloodied her nose and nearly sunk in a triangle choke in the closing seconds. Gonzalez did show effective defense at times throughout the round, but offensively, she was a step behind, despite putting steady pressure on her foe.

Gonzalez began to get busy in the second stanza, getting a takedown in the second minute. Calvillo calmly worked her way to Gonzalez’ back and began trying for a rear naked choke. Gonzalez’ defense was solid, but Cavaillo was tenacious with her ground attack, allowing her to stay in control.

As Calvillo tired in the opening stages of the third, Gonzalez threw and landed more shots, but soon, she was put on the mat by the Sacramento product, who again took Gonzalez’ back. This time, the rear naked choke was not to be denied, with Gonzalez forced to tap out at 3:45 of the final round.

Thiago Alves’ first win since 2015 was his most impressive in several years, as he scored a shutout victory over fellow welterweight veteran Patrick Cote, who retired after the bout.

Alves had an excellent showing in the first round, with leg kicks, a flush knee and a left hook-induced knockdown keeping Cote off the board for the most part.

After that rough start, Cote got more aggressive to begin round two, and he had some success early. But whenever the two would get into a firefight, it was Alves who was on target. That didn’t deter Cote from his forward motion, though, and he was getting in his share of shots. With less than two minutes left, Alves scored a second knockdown, this time with a right hand, but Cote rose quickly and got back to work.

In the second minute of round three, Alves took Cote to the mat, and after opening a cut on Cote’s face with ground strikes, the two rose with two minutes to go. There, Cote kept marching toward his foe, even landing a hard uppercut as he showboated and tried to distract his foe. Alves wasn’t buying it, though, and he got the last word with a hard flying knee in the closing moments.

In the main card opener, former featherweight contender Charles Oliveira made a successful return to the lightweight division, submitting Will Brooks in less than three minutes.

Oliveira opened up the scoring with a takedown and after some ground work, he slammed Brooks back to the mat in order to take his foe’s back. Brooks rose to his feet with Oliveira on his back, but by then, the Sao Paulo native had locked in a rear naked choke. Brooks tried to hold on, but the choke was too tight, forcing him to tap out at 2:30.