MISS THE FIGHTS? WANT TO SEE THEM AGAIN? STREAM THEM ON UFC FIGHT PASS RIGHT NOW! 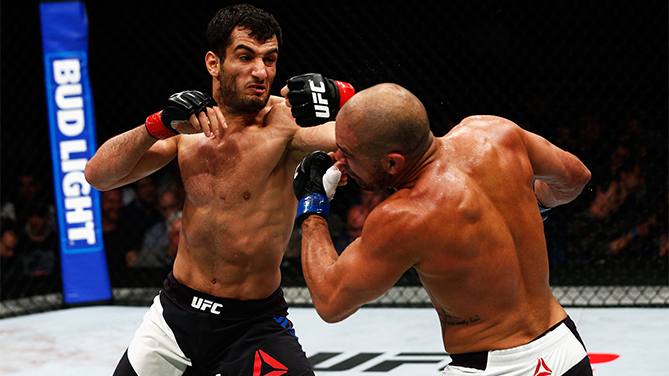 In the UFC Fight Night co-main event at London’s O2 Arena on Saturday, Gegard Mousasi returned to the win column with a three-round unanimous decision win over Thales Leites.

The clash of middleweight contenders was scored 30-27 twice and 29-28 for the number nine-ranked Mousasi.

Leites made his move for a takedown as the bout began and he was able to pin Mousasi to the fence when that trip to the mat didn’t materialize. Mousasi was able to reverse position as the two tumbled to the mat in the second minute, but he got right back up, opting to keep the fight standing. After being on the short end of the striking battle for the next couple minutes, Leites pulled Mousasi to the mat, but again, the Leiden product stood up and kept pecking at Leites with his strikes.

Mousasi’s sharp striking allowed him to dominate the second round, and the frustration was evident on the face and in the actions of Leites, whose takedown attempts were growing more desperate as his face began to swell up and get bloodied.

Down two rounds on the scorecards, Leites pulled guard to begin the final round, but the fight didn’t stay there long. Near the midway point of the round, Leites did land some solid shots that gave him hope, but after those brief flurries, Mousasi settled down and went back to controlling the bout, which he did until the final horn. 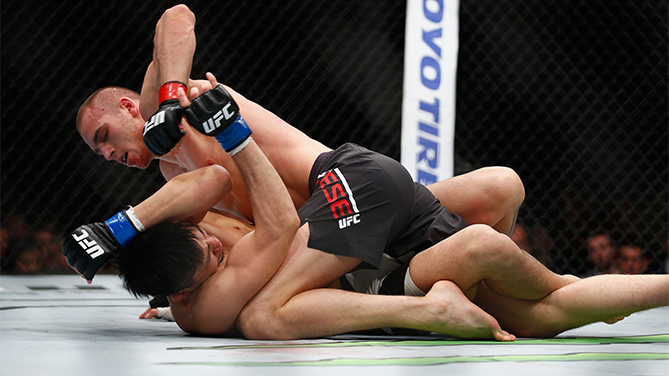 Hot welterweight prospect Tom Breese went the distance for the first time as a pro against Japanese veteran Keita Nakamura and got the toughest fight of his career before leaving the Octagon with a unanimous decision victory.

Nakamura showed off his veteran poise as soon as the bout began, taking Breese to the mat in the second minute. Breese was just as composed, reversing position and getting back to his feet, where referee Leon Roberts restarted them. The rest of the round continued to be fought at a measured pace, Breese leading the action but Nakamura countering well.

There was another takedown by Nakamura to kick off round two, and a subsequent scramble saw Breese look for a leg lock before reversing position and getting on top. As Breese’s top control progressed, he fired off several hard strikes, but Nakamura’s savvy was evident again, as he nearly locked Breese up in an omo plata in the final minute as he reversed position.

The fight went back to the mat in round three, both trading maneuvers in an attempt to pull away in the final frame, but neither was able to, leading to another hard-fought five minutes that ultimately went Breese’s way. 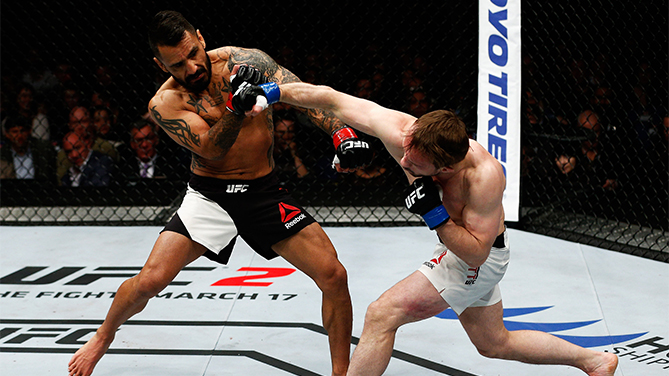 The respect between the two was obvious in the early stages of the opening round, but once Rivera scored a flash knockdown with a little over two minutes left, he began to take over, mainly behind a crisp right hand, but Pickett was far from done, as he got in his share of blows during a furious late round exchange with the Californian.

Two minutes into round two, a more patient Pickett took the fight to the canvas, opting to test out Rivera’s ground game. Rivera responded well, easily pushing Pickett off and getting back to his feet. In the final minute, Rivera scored with a takedown of his own, only to see Pickett rise immediately. A low blow by Pickett in the closing seconds brought a brief halt to the bout, but when it resumed, it was another exciting exchange, Pickett winning it before the horn sounded.

Pickett got the takedown in the second minute of the final round, but a lack of action brought referee Neil Hall in to restart the fight on the feet. Rivera answered with his own takedown with less than 90 seconds to go, but both rose immediately. A slam by Pickett got a roar from the crowd in the final minute, and “One Punch” was able to keep Rivera on his back until the bout ended.