Mounir Lazzez Won’t Be Beaten On His Home Turf

Mounir Lazzez made a splash in his Octagon debut back when the UFC visited Fight Island in Abu Dhabi for the first time last July, as the welterweight from Dubai secured a victory over the dangerous Abdul Razak Alhassan in a Fight of the Night-winning performance.

Since that bout, Lazzez (10-1) has felt a slight shift in his public perception, and while he welcomes the notoriety, he won’t let it go to his head.

“It’s been different and better because I get more attention, but it’s the same mission: stay calm, composed, humble and hard work,” the 33-year-old told UFC.com. “In Dubai, when I’m in the mall or walking, people know me. It’s a nice thing when you’re a home-grown fighter and people appreciate what you do. I want to perform for them.”

This time around, when he meets veteran Warlley Alves at UFC Fight Night: Chiesa vs Magny, Lazzez will have the opportunity to do just that. The UFC is allowing a limited number of fans into Etihad Arena for the event and that means that for the first time in the UFC, Lazzez will be able to fight in front of his people.

"I'm going to climb the ranking. I'm @Mounir_Lazzez. I'm here on the #UFCFightIsland & I cannot be beaten. This my ground, this is my home." - Lazzez speaks on his @UFC debut & what he's expecting from his #UFCFightIsland8 match-up with Warlley Alves#InAbuDhabi | @VisitAbuDhabi pic.twitter.com/xxXnrRpPgX

“It’s going to be unreal,” Lazzez said. “I’m sure 100 percent you will discover it yourself; it’s going to be every single one of them screaming my name, so that will give me push as well to drive and get deeper in the fight and get that extra push.”

“The Sniper” found that extra push against Alhassan and impressed many with his gas tank and excellent skills on the feet. He’s excited for the challenges that Alves will present and is expecting the Brazilian to bring his A-game. 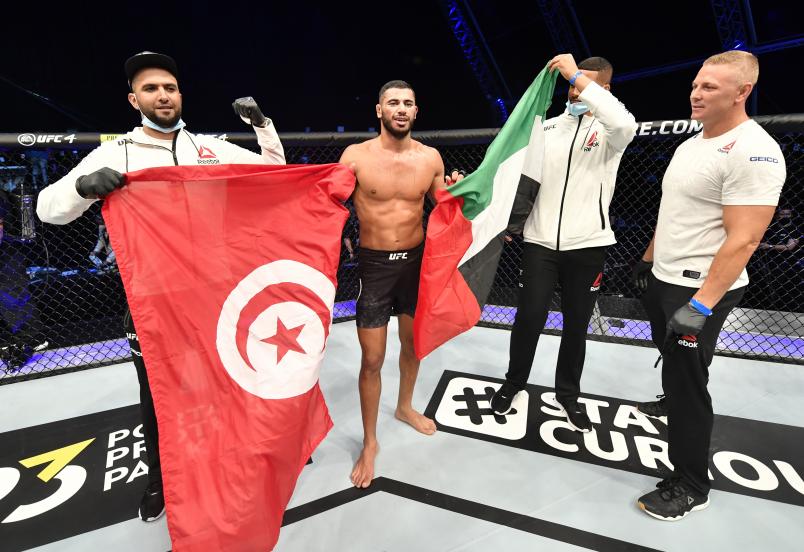 With one war already under his belt, it’s clear that Lazzez is accepting that as the reality of being in the UFC. He isn’t concerned with the pressure of following up that Fight of the Night act with another bonus-worthy performance.

He is simply on a mission to get a win and represent his region.

“I am representing the region. I’m the one who has grown here and the one who made it to the UFC, and with a such good performance with a lot of technique brought to the table. Slowly I’m climbing but still with the same mission: feet on the floor, working hard and smart to get to the top,” Lazzez said. “I don’t want to jump, and trash talk and whatever. Stay humble and hardworking, and I’m going to climb the rankings. I’m just Mounir Lazzez. He’s here, he’s on UFC Fight Island, he cannot be beaten. This is my ground, and this is my home.”