Ask any UFC fighter and they’ll tell you how rare it is be able to represent their hometown on a massive pay-per-view event. Precious few get the chance. Rarer still is the chance to do it back to back in the same year. And yet that’s precisely the position Aussie Jake Matthews finds himself in now.

Representing Melbourne at this weekend’s UFC 243, Matthews also participated in February’s UFC 234 card, although it’s not a contest he looks back on with much fondness.

“The fight with Tony Martin, I was quite happy with it up until, obviously, getting choked out,” he says matter-of-factly. “Obviously I still think back on it in hindsight, on what I could’ve done better. He was a Top 20 guy, it was a big fight, it was an honor to be there.”

The loss halted a dominant three-fight win streak that had put him on the collective radar of the welterweight division. It was the sort of stumble that could have deeply discouraged any surging fighter in his position, but Matthews had a new role that wouldn’t allow him time to wallow.

“I had a daughter due four weeks after that fight. My mind was definitely in that fight, but having the baby definitely took the sting off of losing that fight.”

It’s a tale as old as time: the hulking, fearless gladiator is brought to his knees by the gentle cooing of his newborn cherub.

“It’s the best thing ever. Especially now, she’s nine months, she’s standing up and trying to walk around, trying to talk—she screams at you---but trying to talk. She laughs and smiles. She’s very interactive now. I can’t wait for the day I can get her in choke holds and wrestle her and teach her some jiu-jitsu. It’s been awesome.”

Matthews can scarcely contain the beaming as he describes daughter Alani, noting that for the last nine months, “I’ve just been at home doing dad duties.”

At home doing “dad duties” can be a recipe for peril for first-time parents; the sleepless nights, the diapers, the general domestic upheaval. But there’s a serenity in Matthews’ disposition that tells you this just isn’t the case.

“I don’t want to trigger anyone, but to me it’s quite easy. She’s an easy baby, so I’m very lucky. Obviously it varies. But she’s been the easiest baby, it’s just been a pleasure. There hasn’t been a time when I haven’t enjoyed it.” 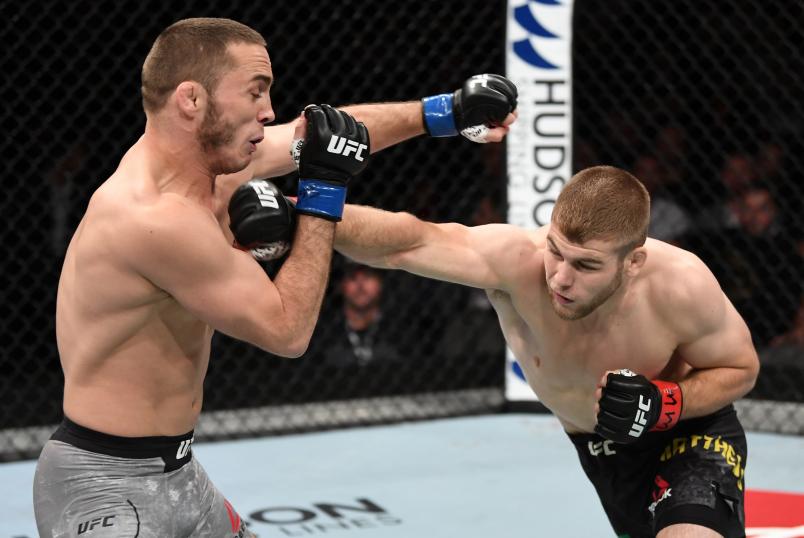 That enjoyment finds Matthews reborn in the gym as well, seeing the world of a fighter for the first time through the eyes of a parent.

“Without consciously thinking about it, I just seem to push harder in training now. That sort of breaking point where you get tired and relax, it’s extended out further now. I don’t know if it’s due to becoming a dad or not, but that’s definitely happened since we’ve had the baby. If anything, its improved my drive, my motivation. And hopefully something I can take into the fight.”

The fight he speaks of is Saturday’s tilt against Sweden’s Rostem Akman, a fierce striker with only one professional loss on his record.

“I think it’s a good fight just to get back on track, get back into the win column. He’s in the UFC for a reason, he’s a tough guy. Is he the caliber of guy that I’ve fought before? No. But in saying that, I’m going in there as if I’m fighting a world champion, like I always do. So, to me, he’s the toughest guy in the world. It’s a good fight, mentally. If they brought out a big-name guy, nerves might be racking up a little bit more. The goal for this one is just to get a nice, quick finish. Put the statement out that I’m still here, still active, still getting wins.”

It would be a sort of ultimate “do-over,” the kind that rights the ship in the presence of his people.

“It’s always good fighting in Melbourne. I’ve got family and friends all coming to watch. I’m going to stay home for a little bit longer as well. Every fight you obviously want to get the win, but even more so being a hometown crowd. There’s definitely going to be that motivation there.”

At only 25 years of age, it’s easy to forget that Matthews has been in the UFC since 2014. At UFC 193, a young Matthews got to participate in the record-setting spectacle that saw Holly Holm shock the world. It was the most-attended event in UFC history, and when UFC 243 returns to the stadium this Saturday, Matthews will be among the select few that gets to experience the enormity again.

“It’s hard not to get even more pumped up, when you’ve got 60-odd thousand Aussies screaming--and they’ll all be screaming for me--it’s hard not to get motivated for that. You might have your bit of anxiety, a bit of nerves before the fight, but as soon as you hear the crowd go, I just feel like I’m at home. When I get into the Octagon, all the noise--it sounds weird—but all those 60,000 people just shut off and I can’t hear anything. It’s just me and my opponent. It’s like a big curtain falls over the Octagon and I can’t see out, and I can’t hear anything else except my coaches. That crowd definitely gets you going.”