A Motivated Cerrone Rides into Chicago

"I don’t watch my opponents’ fights because then I start preparing for
them, instead of preparing myself. I would rather walk into the Octagon
and just fight." - Donald Cerrone 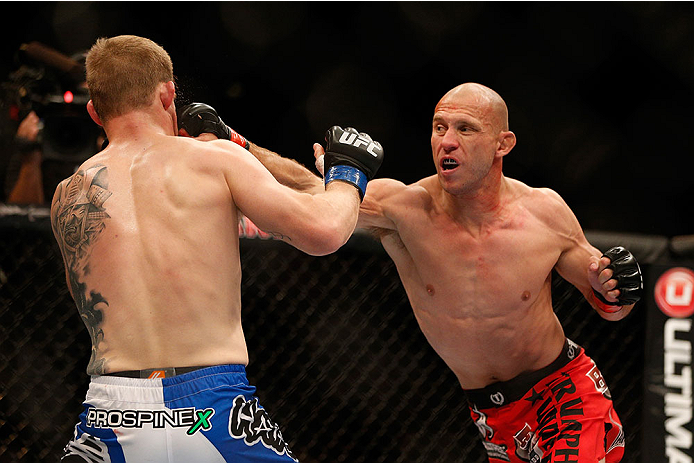 Donald “Cowboy” Cerrone is reading the headlines and he’s shaking his head.

“I said that I spent all my money in one interview and everybody is running with that headline,” says Cerrone.

Cerrone will face Brazil’s Adriano Martins at UFC on FOX 10 in Chicago’s United Center on Saturday, January 25th. But it seems like that is secondary to the reaction he’s getting about his “broke” quote.

“My Twitter is blowing up with a bunch of haters saying ‘will fight for food,’ and ‘you broke dummy” or whatever. Listen up, people. I just built a house and paid cash. I don’t have a 30-year note. You know what it costs to hire electricians and plumbers and painters and buy all that material? I paid for all that. I own my boat. I own everything I have. I don’t carry debt at all. And I did all that with the money I earned in the UFC.”

Coincidentally, during this entire interview over the phone, Cerrone was shopping for gear for his eight-year-old brother, who he was taking to the NFL playoff game between the New England Patriots and the Denver Broncos in the morning.

“Sorry Straka, I’m over here shopping. You hear that everybody: SHOPPING, hold on,” he would say a few times during the interview, followed by “you want that buddy, ok, what size?”

Nick seemed to be having a great weekend with his famous big brother, who was oblivious to the fact that he himself was a star in FOX’s “Road To The Octagon” program which had just been on the tube.

“Really? I didn’t watch, I took Nick duck hunting all day. I never knew how much energy little kids have,” he said. “I’ve had him all weekend, and he’s like the Energizer Bunny.”

This doesn’t sound much like someone about to fight on national television in front of millions of people this week, but alas, there’s nothing normal about Donald Cerrone.

Maybe A.D.D. is a better acronym.

“I’m taking the RV to Chicago, then after the fight I’m going to Daytona for the 500 to see my buddy race, then I’m going wakeboarding for a week,” he said.

“Cowboy” doesn’t know much about his next opponent Martins, who has just one fight in the UFC but is no newcomer to MMA. He’s a jiu-jitsu ace with history in Strikeforce, Dream, and other organizations in Brazil.

In fact, he submitted Darren Cruickshank in November with an armbar that earned him a Submission of the Night bonus, and he took the always game Jorge Gurgel three rounds on his way to a unanimous decision victory last January in a Strikeforce bout.

None of that matters to Cerrone.

“I don’t know anything about the guy,” he said. “I don’t mean that to be disrespectful. It was the same thing with Evan Dunham. I don’t watch my opponents’ fights because then I start preparing for them, instead of preparing myself. I would rather walk into the Octagon and just fight. When I fight my fight I win. I don’t want to know what he’s good at. It screws with my head. I just want to walk out there and fight my fight. If I bump into a guy in a bar and he wants to fight, I don’t know anything about him, but it’s still on.”

Cerrone is like the Kanye West of the UFC. He doesn’t do much press, but he gets the most press.

Earlier this month, Cole Miller called him out during his post fight interview at UFC Fight Night in Duluth, Georgia, saying he wanted to fight Cerrone at featherweight, which put “Cowboy” in the news cycle even before the headlines screamed about him being broke.

“I heard about it, whatever. I don’t even care about Cole Miller. I am back. Man, listen. I made more money than I ever have in my life with the UFC and I got really comfortable. I lost that anger I used to have when I walked in there. And what happens, I took losses to people I should never lose to. I’m back now and I have that hunger again. So whatever motivates me to get that feeling again, then that’s what I need to be doing. If that means spending all my money on my little brother, then that’s what I’m gonna do.”

There’s not much about “Cowboy” that hasn’t already been written. Yes, he still wants to make a run for the UFC lightweight belt. But he says he wants it this year.

“I want to fight either in Baltimore, or in Dallas, so whoever is available, whoever wants to fight me and go to work, step up. I don’t care who it is, just step up, call Joe Silva and let him know, because I need to rack up a few wins to get that belt.”

But first, he has to get through Martins, a tough kid from Manaus, Brazil, who undoubtedly knows a victory of Cerrone will put him on a trajectory toward the same goal.

“He wants to look to me as a stepping stone,” said Cerrone. “I’m not a stepping stone. That’s not my role in the UFC. I’m the guy when you hear you are going to fight Cowboy you go ‘Oh F*&K.’ He drew bad and that sucks for him.”