Morgan Charriere Is Chasing His Dream

Morgan Charriere's Popularity Continues To Skyrocket, And For Good Reason. The Frenchman Shows Out When The Lights Are Brightest And He's Ready For His Next Test At Cage Warriors 122.
By Walker Van Wey • Mar. 9, 2021

At this point in time there can’t be many fighters outside of the UFC more content with life than Morgan Charriere of Cage Warriors.

He’s got youth, he’s got the CW featherweight title and he’s got a fanbase bigger than most major cities. It doesn’t take Gianni the Greek to assume that smart money says Charriere might have a stronger fanbase than 90% of the featherweights in the sport. With millions of views per video regardless of the content, Charriere lives like a king in a sea of admirers and devoted fans.

Despite having a consistent 150K follower range on most social media, Charriere might not have the most followers but he certainly has the most devoted. But with no UFC experience to maximize his exposure across the fight world, how does he do it?

“It was, I think last year, maybe two years ago, I had a YouTube series with a big French streamer,” Charriere explained. “I did a web series on YouTube where he wanted to lose weight. He was like 330 pounds and he wanted to lose weight so he contacted me on Twitter and said, ‘can you coach me? Can you film me through a workout program?’” 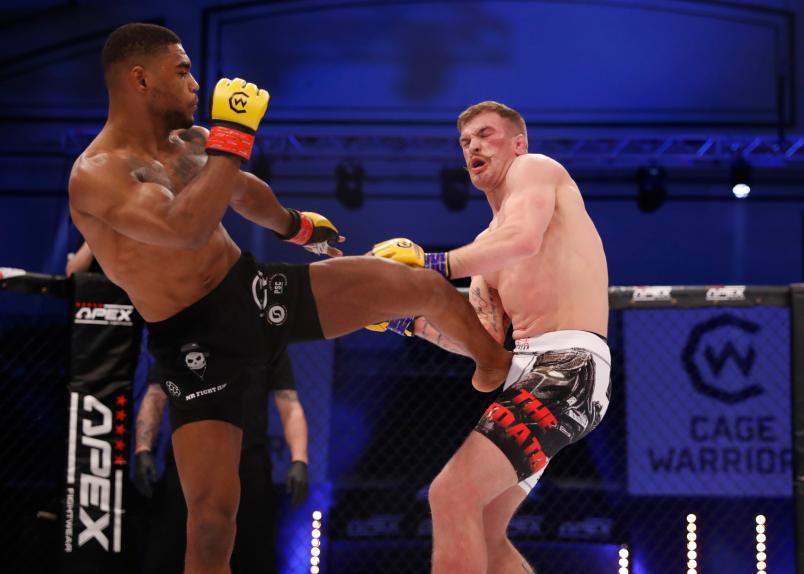 Morgan Charriere kicks an opponent during a Cage Warriors bout.

After proposing a YouTube series to document the weight loss journey, Charriere’s popularity has exploded. You might not see Conor McGregor or Jon Jones in his followers, but you will definitely see a who’s who of Twitch streamers and verified social media personalities who seemingly wait for what Charriere will say next.

The fanbase won “The Last Pirate” the 2020 UFC FIGHT PASS Viral Moment of the Year, and a UFC FIGHT PASS tweet of a pirate flag GIF and the date of his upcoming fight already has more impressions than anything else in the young 2021.

His rise in popularity shot up confusingly quickly and has never let up.

“It became like this two years ago and I jumped from 10K followers to 60K followers in like one month and they were all really interested in me,” Charriere said. “They were not just here to see what I do; they were really here to support me.”

Simply having followers isn’t the goal for Charriere. His goals aren’t to have the biggest number of worshippers. Charriere wants to have the most interactions and impressions across all social media. He wants the highest number of friends.

Is Morgan Charrieré the biggest star in @CageWarriors? There is a strong argument to be made that he is.

Watch him back in action this Saturday at #CW116 LIVE on FIGHT PASS! pic.twitter.com/RtC2PD1EhS

All in one motion, Charriere won CW gold and inked a new deal with the promotion. For at least the next few fights, he will be the new face of Cage Warriors or he will kick in the door and drop the jaws of UFC fans.

The journey is readily available across any social channel there is and even though he knows he’s the face of French MMA with goals of having the most interactive social media in MMA, he’s still just Morgan Charriere.