More UFC Videos Than Ever - Free on UFC.com

Free fights, full episodes and exclusive interviews – there’s now more than ever for the UFC fan online as The Ultimate Fighting Championship® unveiled its weekly video programming schedule for ufc.com.

Each day, a new episodic video will be available on ufc.com by 9 a.m. ET:

Mondays – Fight of the Week Watch some of the finest fistic moments from the fighters on upcoming cards with a full bout available for free.

Tuesdays—Fight Flashback Go back in time to see the best bouts from the pre-FOX, pre-Twitter, pure-fanboy era.

Wednesdays—UFC Breakthrough The biggest names in the sport walk us through their defining moments in the Octagon.

Thursday—UFC Ultimate Insider Go beyond the Octagon and behind the scenes of the Ultimate Fighting Championship with an exclusive segment from the Jon Anik-hosted show. (Countries outside the US get the full episode each Thursday!)

Fridays—Free Fight Friday There are fights you pay for, fights you cheer for and fights you never ever forget. Re-watch one of those unforgettable match-ups each Friday.

Find each week’s episodic content by scrolling over the "videos" option in the red menu above.

Fridays also bring fans an additional dose of fantastic finishes with the Submission of the Week video, which runs in the main video player of ufc.com.

TUF Stuff
Get ready for a new season of The Ultimate Fighter. Weekly episodes are linked and available to watch on ufc.com during the show’s seasons. The new season, featuring coaches Shane Carwin and Roy Nelson starts September 14 on FX, with episodes available the next day (pay-based) and for free after eight days on theultimatefighter.com. The Ultimate Fighter: Australia vs. UK – The Smashes begins on September 19, and episodes will be available to view outside of Australia two days after airing--for free in many regions!

More More More!
The fight fan’s bounty doesn’t end with just videos. UFC.com now features the latest MMA and lifestyle content in articles that go beyond the stars and scraps on the latest Pay-Per-View: 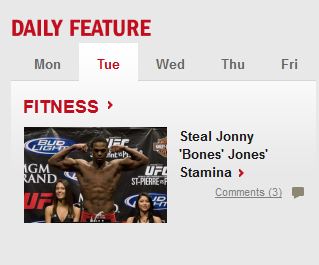 Mondays—Sightings Find out which celebrities sat cageside at the latest live event, who’s who behind the scenes and what the sport’s biggest stars have been up to outside of the Octagon.

Tuesdays—Fitness From fighter regimens to skill-specific drills, train with the leaders in physical performance.

Wednesdays—Gear & Tech Get the latest data on everything from the gloves to the gadgets that help make the MMA the fastest-growing sport in the world.

Thursdays—Nutrition Feed your inner fighter with these healthy diet strategies culled from the best athletes and advisors in the industry.

Fridays—Freestyle Catch up on the week’s commentary, news, fighter gossip and more with our Tweets of the Week column, bringing you the best from our fighters via the social media site.

Find our weekly offerings in the “Daily Features” menu (pictured above) located on the right-hand-side of ufc.com, below the video player.

In addition, fight weeks mean a special feature as UFC/WEC veteran Dan Downes brings his own brand of humor and MMA analysis to The Downes Side. Read his predictions in his quirky column, found in the news section of ufc.com on each morning of an event day.