Morales saved by MMA, hoping for new life in UFC

Every fighter is happy when that call to join the UFC roster takes place. Albert Morales was happier than most. And to top it off, his offer of a contract came from the boss himself, UFC President Dana White, after Morales took just 20 seconds to dispatch Mario Israel in June.

“Words can’t explain it, but what I felt was that it’s really true that if you really work hard, dreams can come true,” Morales said. He knows that the whole “dream come true” thing has been repeated so much that it’s become a cliché, but it doesn’t matter to him.

“It’s cool to see that it’s not just some cliché, some fake thing for people to make you feel good about yourself,” he said. “It’s real. I feel like I should be dead. I feel like I’ve had so many opportunities, and I shouldn’t be here. And the fact that I decided to do something and dedicate everything I can into it, and to see it manifest that day, it’s just unbelievable.” 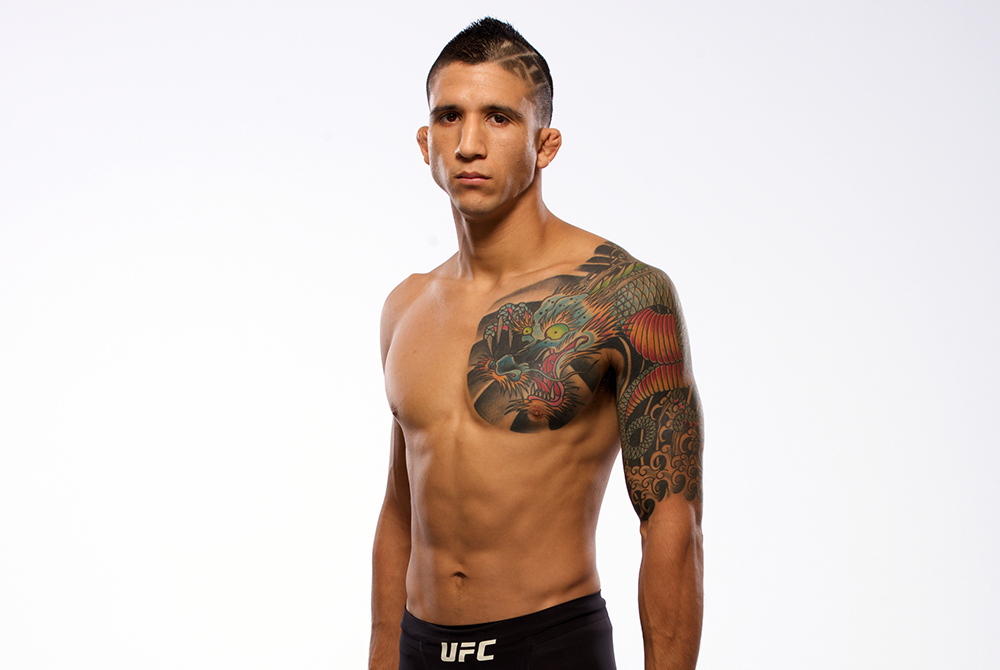 The words “I feel like I should be dead” fall like a boulder from the sky. At 25, the Granada Hills native is a father, a UFC fighter, and a young man with everything to live for. But he’s right, on the path he once took, death or jail were the two options, and he already dealt with the latter.

Being the best bad kid landed him in jail on charges of burglary, robbery and violation of probation. Yet an incident one night changed everything, as a guard accidently allowed the inmates to watch The Ultimate Fighter, usually a banned show because of the combative nature of MMA. Boxing was another no-no, though violent action movies and pro football were okay. Regardless of how it happened, it did, and Morales found his path. When he got out, he began the road to become a fighter. He still remembers the date: May 30, 2013.

A little over three years later, he’s 6-0 as a pro and about to make his UFC debut against Alejandro Perez in the UFC Fight Pass Prelims this weekend. It’s a life changer for Morales, who currently spends his nights in a sleeping bag on the carpet of the gym. He talks of not just beating Morales, but of winning a performance bonus and moving into an apartment.

“Just a little studio so me and my daughters have a place to stay,” he said. “But it’s gotta have a pool, and I’m definitely gonna fix my car.”

He laughs. I ask him where he’s at in his life without mixed martial arts. The loquacious Californian struggles to find the words.

“In jail,” is the first response, then a pause before he revises his answer. “I have no idea where I’d be.

“As blunt as I can say it,” Morales continues. “Mixed martial arts is an opportunity for me to make money. What it’s done for me is it’s changed my life. It’s given me an avenue where I can do that. I’ve always been good at punching people in the face, and now I have the opportunity to make money doing it. Of course I want to be the best, but at the end of the day it’s all about my kids. I want my kids to have everything, and MMA is my job and it’s my life. I also feel like I want to start a trend. I’m definitely the first guy from my neighborhood to make it out and I don’t want to be the last. I want to motivate kids that are in those rough times and think they can’t do anything in life, and let them know that they can change their lives. All they have to do is commit.”

Morales made that commitment, and in Costa Mesa on June 3, he reached the first leg of his dream.

“My stepfather, who’s my dad, he was there that night, so for him to see it, we were in tears,” he said. “It’s a big deal. We all knew I would do it, it’s just awesome to see it happen. My mom is living on Cloud Nine. She’s always been proud of her son, but before she’d be proud of her son, ‘Yeah, he’s out of jail, he’s got a job.’ But now she can say her son’s a professional athlete. I’m available to provide for my kids and her and one day I’ll be able to buy her a home. It’s just a beautiful thing.”

But this isn’t the end. Only the beginning. And that’s starting to sink in.

“It (being a UFC fighter) really didn’t hit me until I was driving on the freeway to practice a few days later and a song came on, ‘The Man,’ by Aloe Blacc, and for some reason that song has always been really deep to me. I always told myself, ‘I’m the man, I’m the man,’ and when it played, that’s when I sunk in. I’m like, ‘Yeah, I’m the man, I did what I wanted to do.’ But that’s the old chapter. It’s time for the new chapter.”