"All I’ve been doing in training – and I’ve been feeling pretty good
about it – is going out there and taking whatever they give me. That’s
pretty much what you guys are going to see." - John Moraga 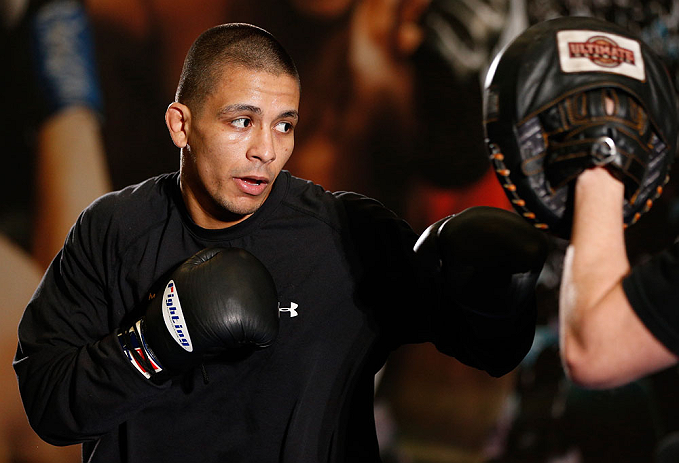 That was the question most people asked when it was announced that John Moraga would be facing Demetrious Johnson for the UFC flyweight title last July. Even to the hardcore set, the man from Maryvale was an unknown commodity.

Each of his first two fights kicked off fight cards on Facebook, and despite the fact that he earned impressive stoppages both times, the 29-year-old fighter remained a remote name well off the radar.

But when he was tabbed to take on “Mighty Mouse” in a hometown fight on FOX, everyone with a digital recorder was in hot pursuit of the new challenger, eager to get his story out there.

It was foreign territory for the tough up-and-comer, whose only previous setback came against former flyweight title challenger John Dodson on the infamous Nemesis Fighting card that took place in the Dominican Republic a few years earlier. The crush of cameras and attention wore on him ¬– the demands of being the unknown challenger opposite the local champion in a nationally televised fight taking its toll.

“I think for the last fight, I let myself buy into all the interviews and hype myself up,” admits the reluctant, but earnest, Moraga. “I had this little game plan that I was going to try and fool DJ, let him think that I was going to come out there and try to bully him, and then sit back and be a little bit more patient, but I think I hyped myself up a little too much. > Watch: Moraga's UFC Breakthrough

“I think the magnitude of that fight is what had the biggest effect – not because it was pressure or anything like that, but it was more that no one knew me, no one expected me to win. No one really knew who I was or why I was even in the title fight, and I just wanted to come out there and put on an amazing performance and epic scrap – I wanted to go out there and be exciting from bell-to-bell.

“Not that I didn’t care about winning,” he rushes to add, “but my focus was more on being this entertaining fighter that everyone was going to gravitate to, and that led to me fighting in a way that left openings. It let him do his thing.”

Johnson controlled the action from the opening bell, using Moraga’s aggressiveness against him to complete 12 takedowns, expanding his lead with each successive round before earning the submission finish late in the final frame.

As the crowd in the KeyArena in Seattle erupted, the challenger stood frustrated, waiting for the official result to be read, displeased with his performance.

“The guy you heard in the interviews, that’s the real me,” he says. “I want to bring the fight every single time and just make it an exciting fight. That probably wasn’t the smart thing to do, and it made it kind of easy for him to execute his game plan when I did that.

“Not only that, I got behind kind of early, and the way I had to start fighting from the middle of that 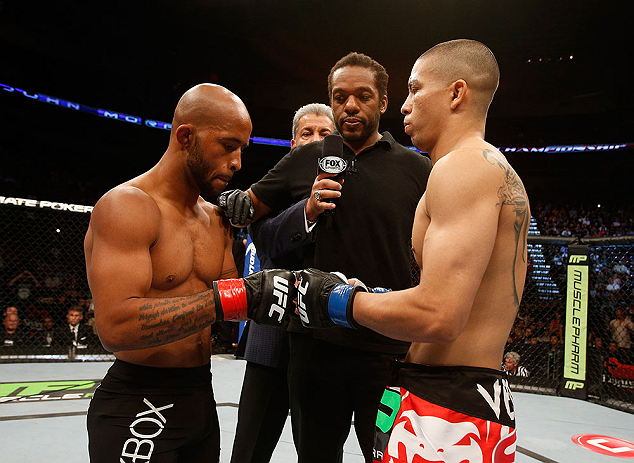 fight – there were a lot of things that went wrong or could have went better. But it is what it is – I move on and I learned from it. I just have to come out and work my way back up, and that’s what I plan on doing.”

Having landed on the business end of a one-sided contest when he fought “his way” against Johnson, the former high school wrestler and proud father has been back in the gym working on a new game plan as he prepares to face Dustin Ortiz Wednesday night as part of the UFC Fight Night: Rockhold vs. Philippou main card.

It is widely accepted that fighters have to perform a balancing act when it comes to their approach in the cage, trying to be both entertaining and successful at the same time, even though the two can be diametrically opposed at times.

“It’s hard, man – it’s hard because I don’t know what I want to do,” Moraga says with a hint of frustration, the quest to find that balance clearly on his mind heading into his return to the cage on Wednesday night. “I don’t want to go out there and put up boring wins, but I want to win – I want to feed my family; I want to keep my job.

“That’s my struggle, but I’m not worrying about that right now. All I’ve been doing in training – and I’ve been feeling pretty good about it – is going out there and taking whatever they give me. That’s pretty much what you guys are going to see. If I have to do this, I’m gonna do that. If he gives me this, I’ll take that. I’m going to be looking for the way that I want to fight, but I’ll take whatever he gives me.”

A Duke Roufus trainee, the 25-year-old Ortiz impressed in his UFC debut, collecting a third-round stoppage win over veteran Jose Maria Tome on Brazilian soil back in November, showing the aggressiveness and well-rounded skill set that helped him earn 11 wins in 13 fights prior to arriving in the Octagon.

After being stymied and ultimately stopped by Johnson’s stick-and-move striking and well-timed takedowns last time out, Moraga expects an entirely different look from Ortiz this time, and welcomes the change, no matter how his opponent opts to approach things.

“I think Dustin Ortiz is a different fighter than Demetrious Johnson – he’s going to bring the fight to me. He’s going to give me some openings. I believe he’s going to try to wrestle me because people think that’s the way to beat me now, but I don’t think they realize that Demetrious Johnson is really good at setting up traps with his angles and his footwork. No other fighter in the division is going to be able to take me down like that, but I know that’s the way people think you can beat me.

“But his game plan isn’t going to work because I don’t have a game plan – I’m just going to adapt to whatever he gives me, and I’m going to beat him.”

As for his comfort level with the media, Moraga admits it’s a work in progress, but is feeling more at ease this time around. 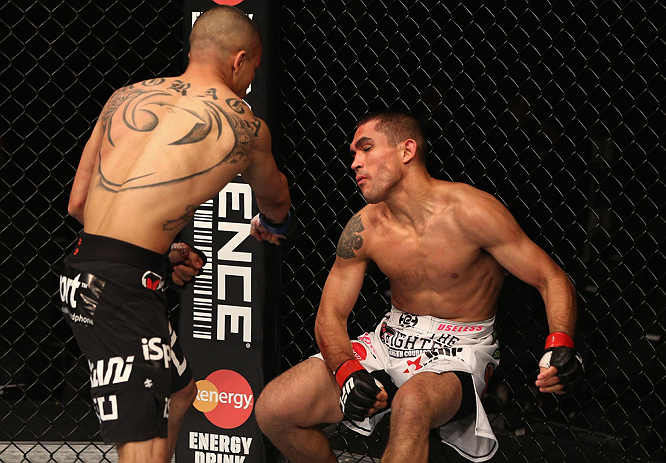 “I know it’s part of the game – people want to know what I’m thinking, but sometimes when I’m on the spot, I don’t put my words together the way I would like for them to come out. I’m more calculated. If I was going to write something down to explain it to you, I would feel a lot better about picking my words carefully and telling you exactly what I mean.

“It’s something I’m getting used to, (but) it’s not interfering as much – I haven’t really done any media for this fight.”

He laughs, happy to be back under the radar and out of the spotlight, ready to return to the cage and the win column on Wednesday night.