Moraga Loses a Round, Wins the Fight

Read on for the UFC Fight Night prelim report... 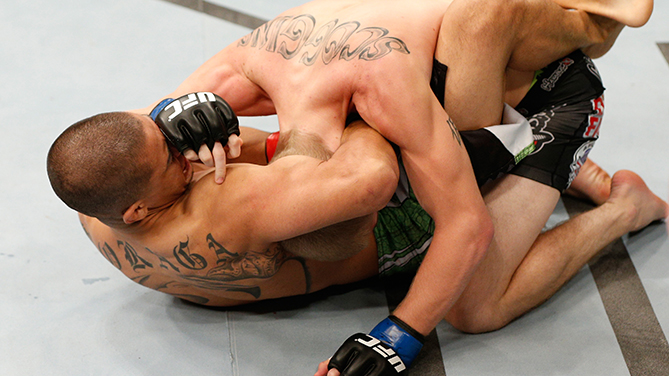 After losing a wrestling-centric battle to Dustin Ortiz in his last outing, Scoggins used his mat game to control the first round. It wasn’t all wrestling though, as Scoggins scored a flash knockdown with a body kick late and bloodied the Arizonan with ground strikes.

Scoggins (9-2) looked to do more of the same in round two, but this time when he shot in for the takedown, Moraga (15-3)  was ready with a sneaky guillotine choke, and the tap out followed at the 47 second mark, giving the former world title challenger a come from behind win.

“He was letting me get under his neck too easy,” Moraga said. “I knew if I could cinch my hips I would get it.”
IAQUINTA vs. DAMM 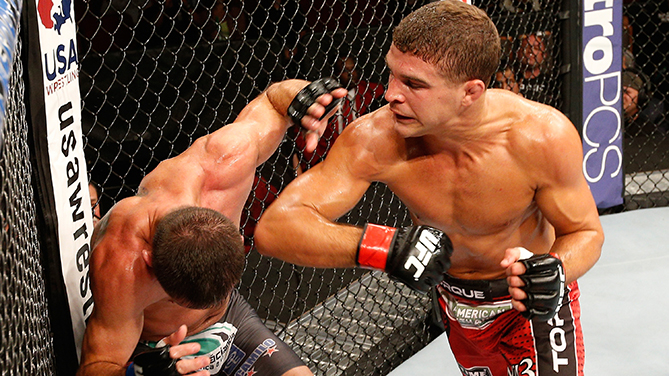 Following a disappointing loss to Mitch Clarke in May, Long Island lightweight Al Iaquinta returned to the Octagon with his most impressive performance to date, dominating, then knocking out veteran Rodrigo Damm in the third round.

Iaquinta’s stand-up game was sharp in the opening five minutes, and his leads, counters, and defense all gave Damm problems, while the New Yorker’s confidence steadily grew.

A hard left hook put Damm on the defensive early in round two, but the Brazilian remained competitive, raising a welt on the side of his foe’s head and bloodying his nose. Iaquinta was just the more effective striker though, and as the round wore on, Damm was getting worn out by the steady diet of strikes.

Two minutes into the final round, Iaquinta finally hit paydirt, dropping Damm with a flush right hand. Iaquinta backed up, calling for Damm to get up. After a brief pause, Damm rose, only to go on the receiving end of several more hard punches and kicks, bringing referee Herb Dean in to halt the contest at 2:41 of the third.

Chris Camozzi appeared to get back in the win column for the first time since March of 2013 in middleweight action, but it was Rafael Natal who took the grueling split decision victory, handing Camozzi his fourth consecutive loss.

The 185-pounders delivered the action they promised in the first round, each getting off some hard shots, with Camozzi holding the edge at range, but Natal getting the better of the exchanges at close range and when the two grappled.

Camozzi (19-9) had another good round in the second, even though Natal briefly got him to the canvas in the early going. But after rising to his feet, the Coloradan stayed in control as it appeared Natal was tiring.

Staying one step ahead while peppering Natal (18-6-1) with strikes, Camozzi was the fresher fighter in the final round, leaving the New York-based Brazilian to look for a haymaker or a grappling battle to turn things around. Neither arrived, apparently sealing the victory for Camozzi, but two judges disagreed, awarding the bout to Natal.
“A victory is a victory," Natal said. "I thought I won the first and second round, but I did get tired in the third round. There was a lot of pressure for both of us. I had a lot of pressure coming into this, because I came off two losses, and I couldn’t lose again. I put everything I had in there, and when you have that type of pressure, it makes you tired because you give everything.
“They’re saying he won the first two rounds, how?" Camozzi asked. "Even if you give him the first, how do you give him the second? That’s not even possible."
BEAL vs. MATSUDA 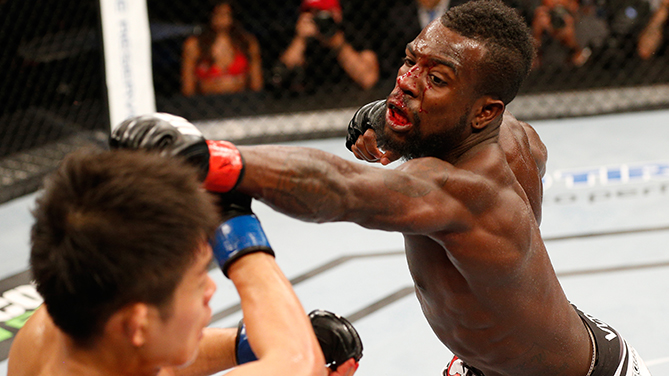 After losing two opponents due to injury, unbeaten bantamweight Chris Beal got a tough challenge from Octagon rookie Tateki Matsuda but still picked up a well-earned unanimous decision victory to improve to 10-0.

The fight got off to a fast start thanks to Matsuda’s frantic striking attack. Beal slowed things down with a solid ground assault that cut his opponent, but once back on his feet, the Boston-based Matsuda thrilled his New England fans with flush kicks to Beal’s lead leg.

Beal was faster and more accurate with his strikes in the second round, leading Matsuda to seek – and get – a takedown. Unfortunately, Beal reversed position as they hit the mat, moving right into the mount position, where he stayed for much of the remaining portion of the frame.

In the third, “The Real Deal” pulled away, controlling matters on the feet and the mat to lock up the decision win.
SKELLY vs. SORIANO 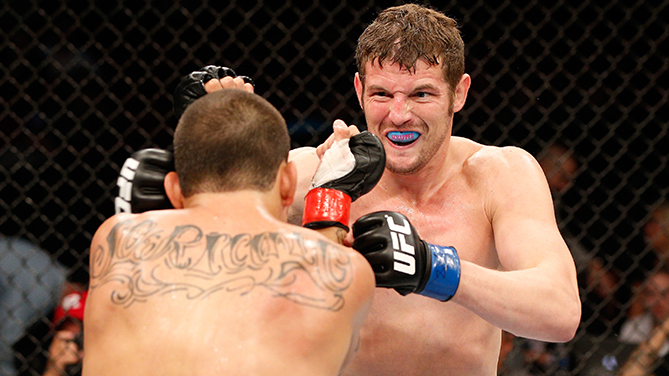 Fighting for the second time in just 13 days, featherweight prospect Chas Skelly picked up his second victory in that span as well, following up his August 23 win over Tom Niinimaki with a three-round unanimous decision win over Rhode Island’s Sean Soriano.

Skelly spent the first half of the opening round mauling Soriano in search of the takedown, and midway through, he got it, but Soriano quickly reversed position and let loose with some hard strikes. The success was short-lived though, as Skelly again took his foe’s back and nearly sunk in a rear naked choke late.

Soriano had a good opening minute on his feet before getting taken down again. A brief break due to a low shot by Skelly halted the action, but after referee Herb Dean restarted the bout, it was all Skelly on the mat as he locked in another round.

The final round mimicked the first two, with Soriano showing flashes of offense that were ultimately nullified by Skelly’s wrestling and submission attempts.