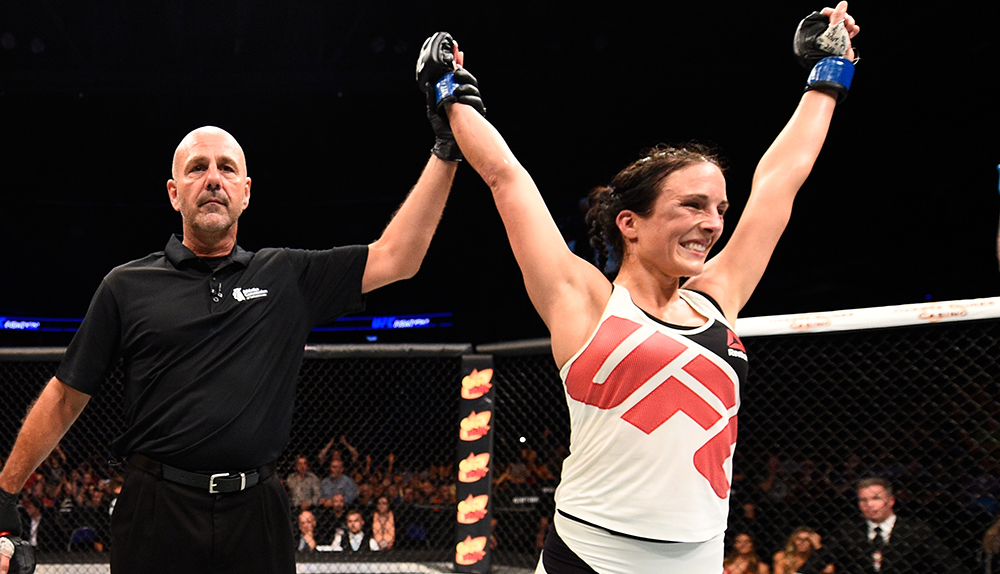 UFC 174 in Vancouver two years ago represented both the finish line and starting point for Valerie Letourneau.

On one hand, it was the end of a seven-year quest for respect and validation after she watched fellow Canadians and former opponents Sarah Kaufman and Alexis Davis ascend to the highest levels of the sport, eventually reaching the UFC. where they were joined by Brazilian Claudia Gadelha, another fighter to garner a victory over the French-Canadian veteran.

After numerous ups and downs, including a loss to Roxanne Modaferri during the elimination stage on season 18 of The Ultimate Fighter, the tough kickboxer was finally getting her shot on the big stage; her chance to show everyone that she belonged.

At the same time, her Octagon debut opposite Elizabeth Phillips also served as the opening lines of Chapter Two in Letourneau’s story.

A pioneer on the women’s side of the sport in Canada, crossing the threshold into the UFC made those prior struggles worth it, validating the years of blood, sweat, tears and sacrifice that often felt like they would end up being all for naught. Competing at the highest level can open doors and create new possibilities, and Rogers Arena became a launch pad to bigger and better things for Letourneau.

“For my first UFC fight, that was a dream come true and I was so ready, so in shape,” said the Canadian contender. “When they say things are going to happen at the right time, I feel like that was the right time.”

Over 15 minutes, “Trouble” and her Spokane, Washington-based dance partner delighted the crowd, injecting an electricity into the audience that had previously been missing.

The bantamweights slugged it out, peppering each other with power shots as they swung for the fences for 15 minutes. When the final horn sounded and the dust cleared, the verdict was a split decision, forcing Letourneau to wait out the most stressful three seconds a fighter ever faces.

“I thought I was winning the fight,” she recalled. “I knew it was a close fight, but I thought I was winning the fight and then you’re like, ‘Oh, one judge gave it to Phillips.’ So you start to doubt and then there are those few seconds inside where you’re thinking, ‘No, this isn’t going to happen,’ because I lost two of my fights by split decision. I know that feeling of being so close and (having it taken away).”

But it wasn’t – the final 29-28 scorecard fell in her favour and Letourneau collected her first UFC win.

“I think my reaction says it all — I was jumping like a little girl. Everybody was making fun (of me). My ex-teammate from Tristar said, ‘You’re so funny when you win your fight,’ but come on, it’s my first UFC win.

“I remember (UFC President Dana White’s) reaction — I know he loved that fight,“ she added.

“Sometimes you’re going to finish a fight with no scratches on you and people are going to say, ‘That’s boring,’ because it was too easy. My eye was closed in the second round completely and we kept pushing. I gave everything I had and the crowd loved it. There is no better experience for a fighter than when you see people are so excited from your fight. Win or lose, it’s a big gift for us.”

That victory proved to be an unexpected catalyst to something special for Letourneau.

Following her win over Phillips, she moved to strawweight and returned home, picking a unanimous decision win over Jessica Rakoczy in Montreal at UFC 186. Almost four months to the day later, Letourneau collected a hard-fought victory over Maryna Moroz in Saskatoon, Saskatchewan, Canada, handing the Ukrainian prospect her first career loss and establishing herself as a dark horse contender in the 115-pound weight class.

Two weeks later, the first line of Chapter Three in Letourneau’s story was written as she was tabbed to challenge Joanna Jedrzejczyk for the strawweight title in the co-main event of UFC 193 at Etihad Stadium in Melbourne, Australia. Not only would she be competing for championship gold in front of a crowd of more than 55,000 people, she’d also be sharing the marquee with Jedrzejczyk, Ronda Rousey and Holly Holm as part of the first all-female closing quartet in UFC history.

Related: Cerrone reflects on fights North of the Border

“Let me tell you something: I’m 33 now and I really believe everything happens for a reason. I really do,” Letourneau said emphatically. “It wasn’t my time and I really had a hard time when I lost my fight against Davis. I broke my hand on the first punch of the first round. My thumb was bending completely back.

“I had her in a submission and the referee made a mistake because I was throwing elbows from the bottom. He broke my submission. They were legal shots, but he thought they were illegal shots and it was really unfair for me — I had her in a closed triangle. All that and I ended up losing the fight by split decision and that brings my record to 1-2. She signs with these big promotions and I’m left behind with a broken hand and a messed up record, but I knew I was that level.

“Seriously, that was so frustrating because those are things that I can’t control. I can train as hard as I want to, but you feel like the world is against you. But it was not meant to be. I trained harder and maybe those hard times made me push harder and be a stronger woman. I’m ready for everything that is coming my way now.”

And everything that is coming her way now in the UFC started with a thrilling performance in Vancouver.

“I want to make my people proud,” said Letourneau. “I have been working so hard to be here. Everybody knows that when I started, I was nothing; this was just a dream that I had. I was looking at these guys and I wanted to do like them. I wanted to be the first one to do it and everyone was making fun of me.

“(There are so many) Canadians, women and people that I want to make proud and give them hope. I’m definitely proud to be doing that.”