Montgomery: Putting Everything on the Line 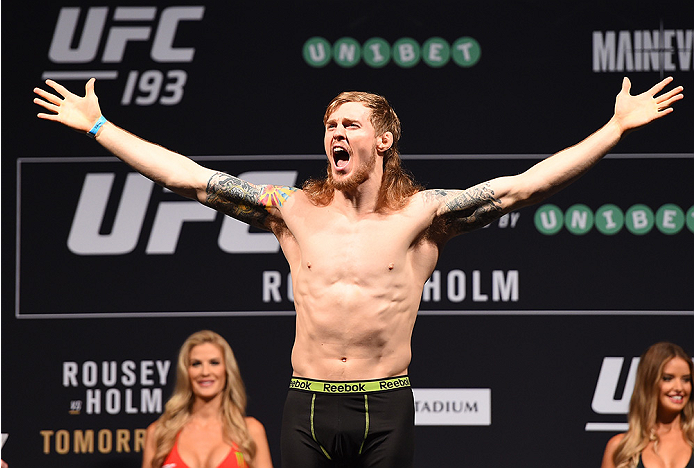 UFC middleweight Steve Montgomery is a living, breathing example of the glass half-full guy. Days before making the grueling trip from south Florida to Melbourne, Australia for his UFC 193 bout against Daniel Kelly, “The Creepy Weasel” wasn’t stressed out or complaining about having to fight halfway around the world.

Frankly, he was excited about the whole thing.

“I’ve been a big fan of Australia since I was a little kid,” he said. “I was obsessed with Steve Irwin, and not just like a fanboy. I used to go out and play with wildlife that was too dangerous if I could find it. So I’m pretty excited to see the country itself, and I’ve got a great friend coming with me who is just a road warrior – Nathan Coy. And I’ve got other great coaches coming with me and I’ve got the timing down. I know what I’m going to do when I get there, and I’m gonna have a nice little neck pillow.”

His attitude is admirable, but sometimes you can’t let certain comments go, such as his fandom of the late Irwin, better known to fans as “The Crocodile Hunter,” or more notably, his attempts to find wildlife in his hometown of Florence, South Carolina.

“If I could, I would find a water moccasin or a cottonmouth (snake), a little gator, random little snakes. I used to go to the pet store all the time and just play with the snakes and I’ve had pet snakes all of my life. I just liked his (Irwin’s) passion, and I guess the fact that we both shared the same name probably made me a little biased.”

Montgomery will probably have plenty to talk about with fellow UFC 193 competitor Kyle Noke, who used to be Irwin’s bodyguard, but before that, there’s business to take care of with four-time Aussie Olympian Kelly, who, like Montgomery, is coming off his first UFC loss.

In Montgomery’s case, his defeat came via knockout to Tony Sims in June. It was the former Ultimate Fighter 21 cast member’s first UFC fight, his first knockout loss, and a shock to someone who expected to jump into the Octagon on short notice at welterweight, pick up the win over Sims, and move back to the middleweight and begin his march to a world title. But it didn’t happen. And all in just two minutes and 43 seconds.

“I’ve done a lot of assessing of it and tried not to harp on it, and I think overall it was a good experience, but I was a little too – I don’t want to say I shouldn’t enjoy it, but at the same time I let the ambiance get to me,” he said. “Not that it made me nervous, but I almost had too much fun. I had this mindset of ‘oh, this is the first of many great fights in the UFC, I’m gonna have this awesome performance and have ten more, and by the time next year comes around I’ll be this star.’ I was almost over anticipating things when I really should have been treating it like I treat most of my fights – like this could be my last fight. I should have possessed that do or die mindset when I went out there.”

It’s an interesting approach, but Montgomery isn’t backing down from it as he makes his UFC middleweight debut. In fact, he feels stronger than ever about looking at this fight as his last.

“I could go out there and have the greatest performance of my life and get hit by a car the next day,” he said. “You never know. You’ve got to treat it like it’s your last every time and truly have the appreciation to put yourself in that kind of moment where you really are focused in and you get in that zone.”

That’s got to be a lot of pressure, the idea that everything rides on this 15-minute segment of your life. But the 24-year-old disagrees.

“It’s almost liberating,” he said. “Let’s say you’re training, and it’s the first round and you know you’ve got five more rounds to go. You might go a little bit slower in the first round; you might try to conserve your energy. But if you think it’s the last round every round, you’re gonna push through, you’re gonna gut it out. If you know you’ve only got two minutes left, you’re gonna keep your hands up and throw 10 punches instead of two. So knowing that it could be my last fight, ever, it puts you in this mind state of not only do you want to stay sharp, but you’ve got to let it go. I’m gonna go out in that first round and treat it like it’s the third round and I lost the first two. I can’t lose. I can’t fail.”

Sounds like a lot of pressure to me, but fighters are a different breed, refusing to fall prey to the doubts that would crumble mere civilians. So Montgomery is comfortable with all this, and at the very least, with this mindset he won’t have to worry about questions about what’s next.

“My last fight, I was answering those questions happily,” he laughs. “But there really is no ‘what’s next’ until after the fight.”

As for the fight, Montgomery sounds as confident as ever coming off the loss to Sims, but does Kelly feel the same way after his loss to Sam Alvey in May? Montgomery doesn’t care, and if there are any doubts in the mind of the Aussie, he’s aiming to find them.

“I hope he comes in there as confident as he can be. I want his confidence at an all-time high because when my first straight punch lands and breaks his nose, there’s going to be a lot more confidence for him to lose,” Montgomery said. “I’m going to put doubt in his head right away, and whether he’s confident the whole time or not, when he wakes up, that’s all there is to it. My confidence was at an all-time high in my last fight, I rocked the guy with a knee, and then landed a jab and almost landed a head kick. Then all of a sudden, you’re trying to pull guard and the ref’s telling you it’s over. So I just plan on coming out there and destroying the guy. It doesn’t matter whether he’s confident or not, I know what I’m gonna do.”

“It was a really hard year with a lot of rewards and a lot of tough challenges,” he said. “A seizure on the show, then we (American Top Team) won the show, then some of my friends lost their fights. We had some big wins, I lost my UFC debut after several fights getting canceled, my girlfriend’s mother passed away really unexpectedly. So I look at it like this: we had a really tough three quarters, but all that matters is what happens in the fourth, and what happens at the end. So I’m coming out here to blow the socks off the fourth quarter and all I’ll remember 2015 for is getting the greatest win of my life and changing my life around.”