Before a January victory over Felipe Colares extended his current winning streak to three, I asked Montel Jackson what he expected out of his 2020 campaign in the Octagon.

“Greatness,” he responded. “This is the year, a breakout year for me.”

Then COVID-19 showed up. So has “Quik” been forced to readjust such lofty goals?

“Not really,” he said. “It's still going. You've just got to make the adjustments and keep going. There's no point in crying over spilled milk. It's gone, it's over.”

On Saturday, Jackson gets to toss aside the last six months on the sidelines and continue his quest when he meets Brett Johns on Fight Island. It’s a long trip to Yas Island, but the 28-year-old isn’t sweating it.

At this point in the conversation, I note that Mr. Jackson is quite the unicorn in his business. There are no complaints, no wondering what could have been, no ‘why me.’ The way he sees it, that’s all wasted energy in a sport where he needs everything he can muster to deliver on fight night.

“What's complaining gonna do?” he asks. “Complaining don't do nothing but stress you out even more. Don't complain - it produces no results.

Maybe that’s the secret to Jackson’s success thus far. A winner on season two of Dana White’s Contender Series, Jackson didn’t get a contract after stopping Rico DiSciullo, but he was in the Octagon and on the roster less than two months later, dropping a competitive decision to Ricky Simon. 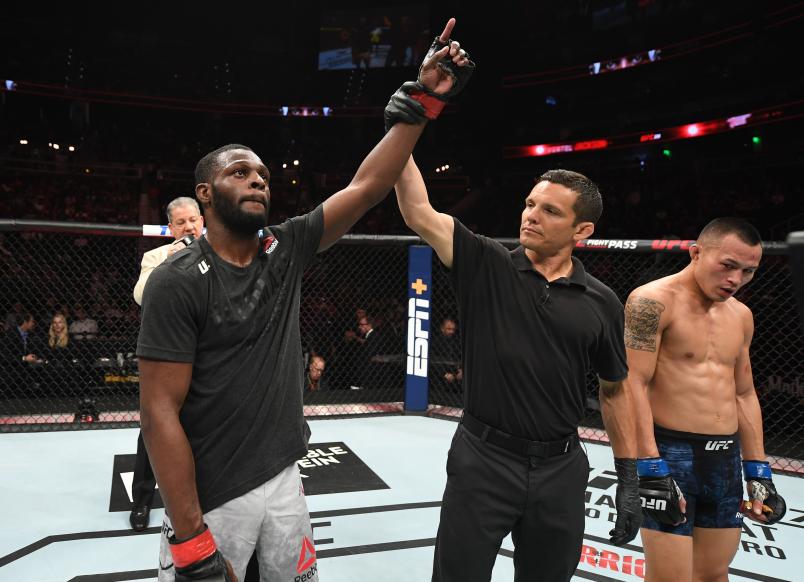 Montel Jackson celebrates after defeating Andre Soukhamthath in their bantamweight bout during the UFC 236 event at State Farm Arena on April 13, 2019 in Atlanta, Georgia. (Photo by Josh Hedges/Zuffa LLC)

He hasn’t lost since, with the Colares victory preceded by wins over Brian Kelleher and Andre Soukhamthath that have him on the shortlist of top prospects in the stacked bantamweight division. A win over Wales’ Johns may even see him crack the top 15. That’s a big deal for a young man who came up hard in Milwaukee, and his success has the young people of his neighborhood watching.

That doesn’t mean he wants those looking at him to follow the often rocky path he took. Instead, he hopes they see him as an example and then figure out their own way.

And just don’t tell Jackson that he “made it,” even though some would say that’s the case.

So what does “making it” look like to Montel Jackson? He’s got a picture in his mind.

“When I do some Anderson Silva-type s**t, I go 14-0 in championship fights or do some Jon Jones-type s**t,” he said. “Or I beat Demetrious Johnson for most title defenses, go undefeated for 10 years.”

Sounds like some plan, one even the COVID-19 pandemic can’t stop.

“It's not about how you start but how you finish,” he said. “And I'm gonna need to finish on top, emphatically.”