Montano unfazed by the potential target on her back

From the 14th seed to a world championship fight, Nicco Montano has surprised a lot of people on her way to tonight’s Ultimate Fighter main event against Roxanne Modafferi.

“Oh yeah, one hundred percent,” she laughs. “But I kept faking it until I made it. After a couple days of practice with my teammates, I was like, well, I deserve to be here and I can fight like the rest of them with the other 15 best girls in the world. And I believed it.”

Unheralded and virtually unknown before she was selected to compete in the tournament that would determine the UFC’s first women’s flyweight champion, Montano was thinking about returning to school and making fighting a hobby, not a full-time endeavor. Coach Tom Vaughn, as no nonsense as they come in this game, let her know that he thought she had the talent to succeed. She just had to want it too.

“Here I am,” Montano laughs.

Defeating Lauren Murphy, Montana De La Rosa and Barb Honchak in succession, the 28-year-old earned her place in the final alongside Sijara Eubanks, but when medical issues forced “SarJ” from tonight’s fight, TUF 26’s number one seed, Modafferi, stepped in. It’s another twist in the wild ride Montano took to get here, but she’s not rattled by any of it, simply because TUF showed that she belongs with the best 125-pound fighters in the world. That’s heady stuff for the New Mexico native to take in, but knowing it helps her push through any doubts that ever crop up.

“It’s a super intense feeling and I don’t really resort to it because I don’t want to settle right now,” she said. “I still have my 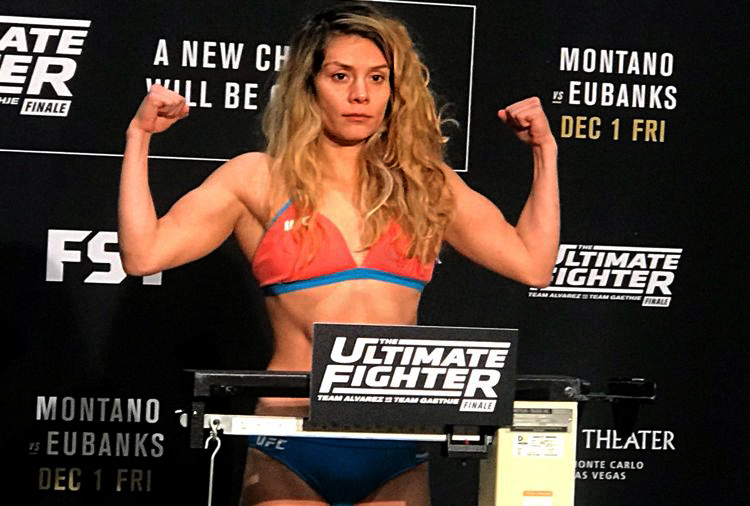 fight, and I don’t want to be part of this or be number two. I want to be the one, I want to be the champion. So whenever I have these long days of training or something’s going wrong, knowing that I can tell myself ‘You’re gonna be a world champion’ ignites a whole different fighter inside.”

That whole different fighter may have a target on her back come Saturday morning if she leaves the Park Theater with a gold belt around her waist, but if she wasn’t rattled by six weeks of training and fighting with a cast of top flyweights around her, odds are nothing will rattle her now.

“I knew that once there was a ’25 division, there was gonna a ton of girls, which is gonna make for more exciting fights,” Montano said. “I knew going into the show and even before that that it was gonna be a big division and that the winner would have a target on their back, but now that I’m this close, it doesn’t really faze me.”