Montano message to all underdogs: "You're in control of your destination"

A world championship may have changed Nicco Montano’s life, but it hasn’t changed who she is.

“It was not even a year ago that I was still living in the basement, trying to figure out what I wanted to do,” she said recently. “It’s definitely all new, all fast.”

That whirlwind kicked into gear when the New Mexico native made one of the most memorable runs in the history of The Ultimate Fighter series, as she went from the 14th seed to the season title, a title that just happened to be the first women’s flyweight championship in UFC history.

On Saturday, Montano defends her title for the first time against Valentina Shevchenko in the co-main event of UFC 228 in Dallas, and while the champion enters the fight as the underdog, that’s a role Montano has learned to embrace.

“It should be pretty similar to me in the TUF house,” she said. “Barb (Honchak) was the number one 125er for a long time in Invicta. Look at Roxy (Modafferi)’s record too. Statistics don’t really show everything when it comes to MMA. You find out a fight can go one way with one person and go completely opposite with a different person. And I don’t think she’s been able to fight somebody who has my style.”

Shevchenko has the edge in experience – both in and out of the UFC – and the former bantamweight contender looked unstoppable in her first flyweight fight in the Octagon against Priscila Cachoeira, but if history has proven one thing with the 29-year-old from Albuquerque, it’s that you underestimate her at your own peril.

Just ask anyone who faced her on TUF 26, but the Montano story gets even more compelling when you consider that she was wondering whether she was going to continue fighting after a January 2017 loss to Julia Avila.

“It was tough and I was always having these battles with myself,” Montano said. “I’m going to practice from 4:30 until 8 every night, when I could be making a ton of money during that time instead of investing that time on the mats.”

Montano began applying to colleges, then one of her coaches, Arlene Sanchez, told her about the TUF tryout and suggested she give it a shot. Montano agreed, but during the week of the tryout, she began receiving acceptance letters.

“I was gonna go to school if these guys don’t pick me, and they picked me,” she laughed. 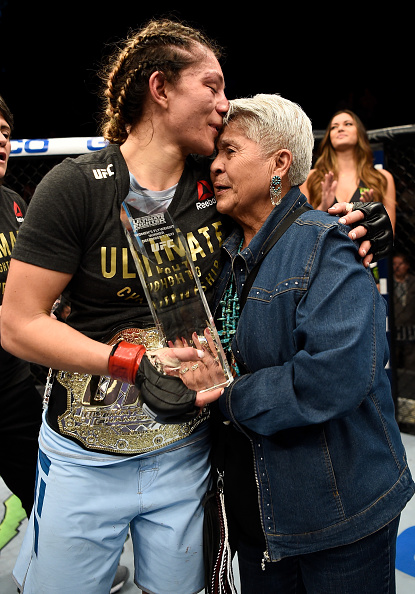 That could have been the end of the story, but it was only beginning. In a competition with 15 of the best flyweights in the world, Montano knew the odds were against her, but by her third practice with Team Gaethje, she knew she had a shot.

“I knew I was gonna have to fight girls like this one day. On the show it just became real.”

First Montano upset Lauren Murphy, then decisioned Montana De La Rosa before pulling off another upset over for Invicta FC champ Barb Honchak, putting her in the final against Sijara Eubanks. The twists and turns weren’t over yet, though, as Eubanks suffered complications with her weight cut, forcing her from the fight. In stepped another veteran in Roxanne Modafferi.

“She surprised me,” said Montano of Modafferi. “I don’t think a lot of people know how strong and technical she is. She has a really long reach and she has this style about her that nobody can get. At first, I didn’t think of all of this. I was like, we’re friends, this is a great experience. And then she punched me a couple of times really hard and I was like, what the f**k, Roxy? I thought she was ‘The Happy Warrior.’”

Montano laughs, but by the end of a grueling 25 minutes that earned Fight of the Night honors, it was no joke. Nicco Montano was a world champion. She didn’t get much time to celebrate, though, as injuries and illness kept her sidelined until she got cleared in time to prepare for Saturday’s bout.

And in Dallas, she gets the chance to silence the doubters once more. If she does, those doubters will likely disappear.