Even with several UFC bouts under her belt, Montana De La Rosa is excited to put all her skills together in the Octagon.
By Zac Pacleb, on Twitter @ZacPacleb • Sep. 2, 2020

As the sport of mixed martial arts continues to grow in scope and popularity, up-and-coming fighters have more opportunities to get their feet wet on the amateur circuit as they try to reach the big show in the UFC. As is the case, when they do get their shot in the Octagon, they’re pretty polished in terms of knowing what kind of fighter they are when the cage door closes.

That wasn’t the case for Montana De La Rosa, who got an early jump on her professional career and carried a 7-4 record into The Ultimate Fighter 26. It was in the TUF house where she gradually realized she absolutely belonged with the best in the world.

“I always thought, ‘Oh, I’m emotional, and I can’t get over these certain things. I’m having trouble here and there,’” De La Rosa told UFC.com. “But it seemed like all the girls were like that. They’re not 100 percent mentally strong like you would think a professional fighter would be, but we all have our ups and downs.”

So far, De La Rosa has experienced almost exclusively ups in the UFC. In five walks to the Octagon, she is 4-1 with three submissions and that lone loss coming to fellow top 15 flyweight Andrea Lee.  All the while, De La Rosa has learned on the job. While her submission game is her bread-and-butter (eight of her 11 wins are submissions), she showed increased confidence on her feet in her fight against Mara Romero Borella.

While she did impose herself in the grappling department in that fight, it was a sneaky overhand right in the third round that was the exclamation point on a unanimous decision win in Rio Rancho. It was a fruit of the labor she put into blending all her skills together well and not having to rely strictly on her grappling game.

“At first, I felt like I had to take them down to win the fight,” De La Rosa said. “If I was doing OK on the feet, I was like, ‘I have to get a takedown right away.’ And that’s just what my mindset was. But now, I learned that I can win in other ways, and I don’t have to force anything.”

Her evolution could take another step heading into her September 5 tilt against Viviane Araujo. Instead of training exclusively in Fort Worth, Texas, De La Rosa opted to work with Elevation Fight Team during her six-week training camp. The shift in scenery was something she was pondering before her husband, Mark De La Rosa, fought in mid-June.

Based in Denver, Colorado, Elevation Fight Team is home to the likes of interim lightweight champion Justin Gaethje, heavyweight contender Curtis Blaydes and bantamweight contender Cory Sandhagen. With so many top-tier fighters in the gym, De La Rosa feels confident in her decision to train under the tutelage of coaches Eliot Marshall and Christian Allen.

“They just have so many high-level coaches,” De La Rosa said. “You can pick their brains at all times, and they have lots of people in the UFC, so you know they’re doing something right because they’re winning. It felt like the right move.” 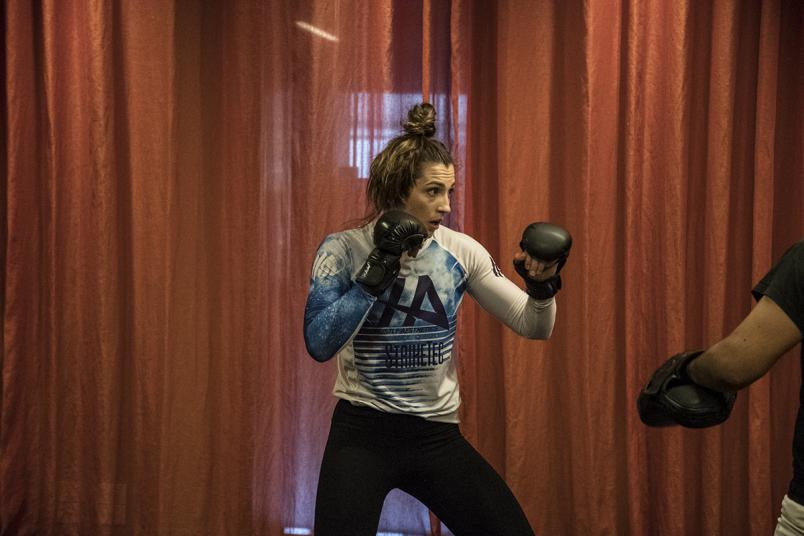 De La Rosa said she paid close attention to Sandhagen over the last few weeks, noting his particular way of movement and how he mixes his grappling and striking.

Of course, training in Denver means living in an AirBnB and away from her husband and daughter, Zaylyn, back home in Texas. Before that, De La Rosa said she and Mark were still able to get their normal amount of work in during the early parts of the coronavirus pandemic-induced lockdowns because they had a key to the gym. And while the stay-at-home experience was different for everyone, especially parents, De La Rosa said it was great to have the extra time together. With the surplus of downtime, she admitted to starting a new hobby of crocheting, which she described as “super lame,” although UFC heavyweight Maurice “The Crochet Boss” Greene probably takes exception to that.

Regardless, De La Rosa hasn’t dealt with anything at home for the last six weeks while in Colorado. She said her family visited her during camp, and Mark would help wrap up the last of camp before fight week, but De La Rosa did enjoy the ability to just take care of herself, her training and her fight.

“All I do is eat, train and sleep,” De La Rosa said. “It’s nice to be able to just focus on that and not to worry about making sure my family is good, taken care of and all those things back home.”

That’s an ideal setup as she approaches her toughest test yet. Araujo is 8-2 with just one win going the distance, and she is likely hungry after dropping a unanimous decision to Jessica Eye at UFC 245. De La Rosa, who was originally scheduled to fight Maryna Moroz, perked up when plans changed a month before the bout.

“It actually made me a lot more excited for it,” she said. “(Araujo) is a top-8 fighter, and I think her last fight was supposed to be, if she won that, she would be fighting for the title. I think it’s just a bigger fight for me, and I’m really excited for it.”

Still just 25 years old, De La Rosa has put herself in a solid position in the wide-open flyweight division. Sometimes, getting thrown in the fire hurts a fighter more than anything. But in some cases, an athlete can learn on the fly at the highest level and, so far, that is exactly what De La Rosa has done.

On September 5, with the help of a new camp and more time in the Octagon, she gets another chance to show off the next version of herself, something that is most exciting to her.

“Every fight, I’m just getting more and more comfortable in there,” she said. “I went straight pro, so I wasn’t able to get all the amateur experience and everything. I feel like I’m just now starting to be able to put everything together and be able to showcase all my skills.”