A mainstay in the flyweight rankings, Montana De La Rosa feels like she still has yet to reach her prime.
By E. Spencer Kyte, on Twitter @spencerkyte • Nov. 30, 2020

If someone told you there was a fighter in the UFC that had been competing for six years and already amassed an 11-6 record overall, chances are you probably wouldn’t guess that the individual was still just 25 years old, but such is the case with Montana De La Rosa.

A cast member of Season 26 of The Ultimate Fighter, De La Rosa has been a staple in the flyweight division since its inception, storming out of the gates with three straight victories to begin her UFC career and establish herself as one of the top young talents in the division. Though her last three outings have produced just a single victory, the female half of the first husband and wife combo to compete in the UFC together is quick to recognize that time is on her side and that these struggles and setbacks are all opportunities for continued growth and development on the road to reaching her ultimate goal.

“At some point in my career, I want to be the champion, and that would make all the sacrifice worth it,” said De La Rosa, who replaces Maryna Moroz opposite Taila Santos this weekend in Las Vegas. “I feel like I’m growing every single fight. I’m learning from all kinds of different coaches and every day I’m growing.

“I’m 25 and I don’t want to retire until I’m 34, so I have 10 years and I have my goals. If I’m falling way behind, maybe this isn’t what I need to keep pursuing, but I have my goals and that’s why I train so hard. I wake up every morning with a goal and that’s the track I’m on.” 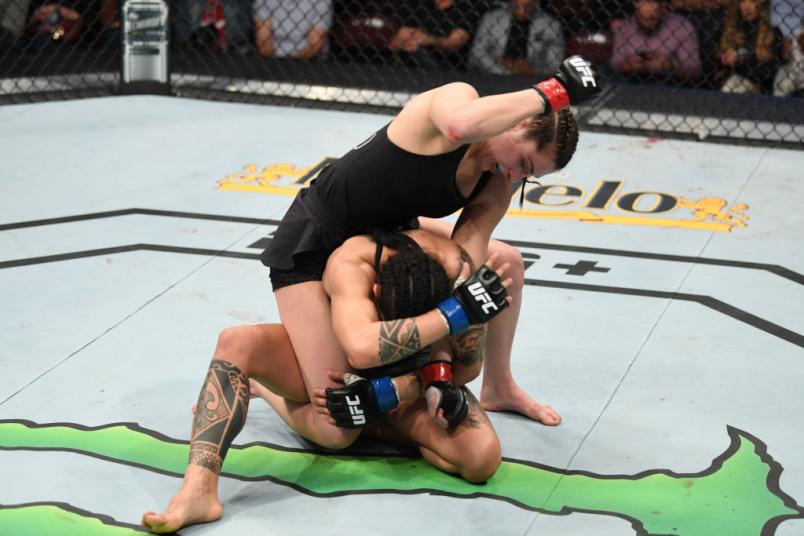 Securing an opportunity to compete again before the end of the year was one of those goals, and the Texas resident was quick to jump at the opportunity to replace Moroz this weekend.

“Right after my fight with Viviane, I really wanted to get back in there,” said De La Rosa, who lost to Brazilian Viviane Araujo in September. “I felt great in that fight and I really didn’t take too much damage besides some bumps and bruises.

Because she’s been a recognized prospect since prior to entering the Ultimate Fighter house and has subsequently spent the last three years as a ranked member of the flyweight division, it’s easy to forget that De La Rosa still hasn’t entered her athletic prime.

She skipped competing as an amateur and turned pro at age 19, losing her first two bouts before rattling off six straight wins. Losses to current UFC contenders Mackenzie Dern and Cynthia Calvillo halted her run of success, but didn’t diminish her standing as a fighter on the rise, and she has gone 5-2 since then, earning four wins and three submission finishes in her first six UFC starts, all before turning 26. 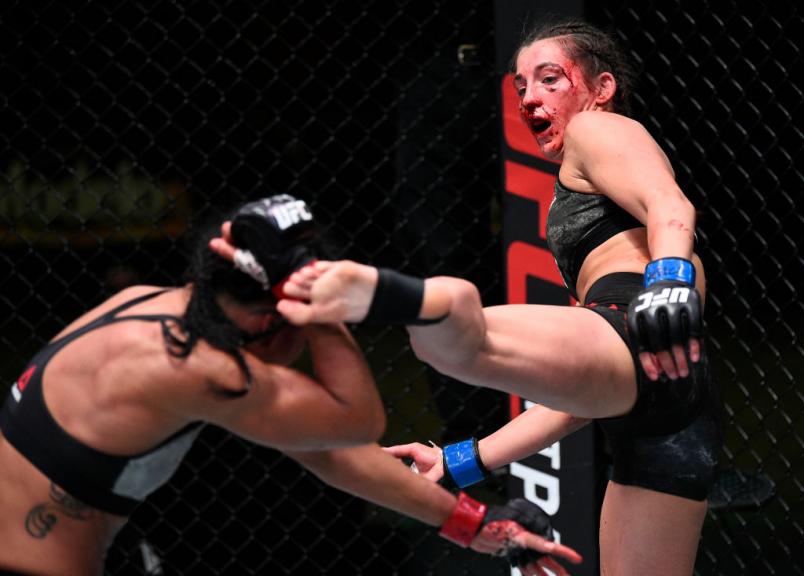 As with many talented up-and-comers who hit the ground running when they first arrive in the Octagon, expectations often out-pace realistic assessments of where a fighter stands in both their development and the divisional hierarchy, leading to more weight being given to stumbles than might otherwise be merited.

De La Rosa admits there have been times where she too has been frustrated by the setbacks she’s been forced to deal with, however, the former high school wrestler also acknowledges that her first three years on the UFC roster have been crucial to gaining increased comfort inside the Octagon and that her husband and coaches are often quick to remind her that time is on her side.

“It’s just really been about solidifying my place (in this division) and realizing this is what I’m meant to do,” De La Rosa said of her time on the roster. “Each and every time I get in the Octagon, I get more and more comfortable with it.

Related: Fighters on the Rise

“The first few times, it was really nerve-racking and I had to go through all that mental adversity, but now I feel like that is where I need to be and I’m getting more and more comfortable being in there.

“I think having my coaches around me and my husband around me all the time telling me ‘You’re still young’ and 'You’re still growing as an athlete’ and knowing there is so much more I can do makes it a lot easier for me,” continued De La Rosa, whose husband, Mark, has split his time between the bantamweight and flyweight divisions.

“It makes a world of difference,” she added in regard to having a partner who is intimately familiar with the difficulties and struggles of the fighter lifestyle. “He was fighting before me, so he knows how long it takes to reach a certain level.

“He’s helped me with my career up until now and he will until the end.” 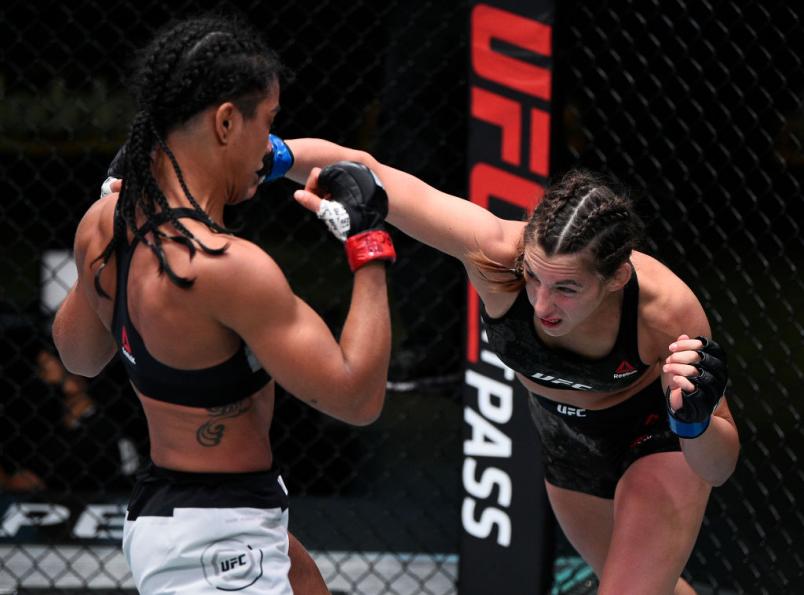 But the end is a long way away and De La Rosa’s focus is locked squarely on Santos this weekend.

Sporting a 16-1 record overall with a host of first-round finishes from her days on the Brazilian regional circuit, the 27-year-old Santos is an intriguing addition to the flyweight ranks, and just the kind of competitor De La Rosa is eager to test herself against.

“I know she’s not Top 15 right now, but she has a lot of potential, so I’m ready to get in there,” she said of her Brazilian opponent, who rebounded from a loss in her promotional debut with a unanimous decision victory over Molly McCann in July on Fight Island.

“I love that she’s super-tough and game and ready to fight whoever,” continued the Ultimate Fighter alum. “She has a lot of knockouts in her career and I’m ready to get in there and test myself.”

But while most onlookers will view this latest test for De La Rosa on a pass/fail basis depending on the results, the reality is that Saturday’s matchup is just another in a series of assignments designed to gauge progress, not deliver a final grade, because the goal isn’t to be a finished product this weekend, but to continue improving so that one day in the future, De La Rosa will be able to realize her championship dreams.

“There are little things in every part of the martial arts that I can keep improving on; I can keep getting stronger, up my cardio, and to keep my mindset good, and I’m on track for that,” she said with an eye to the future.

“I know I can continue getting better each fight.”