"This is my division – I’m doing well, I feel strong here, and we’ll see what happens.” - Chad Mendes 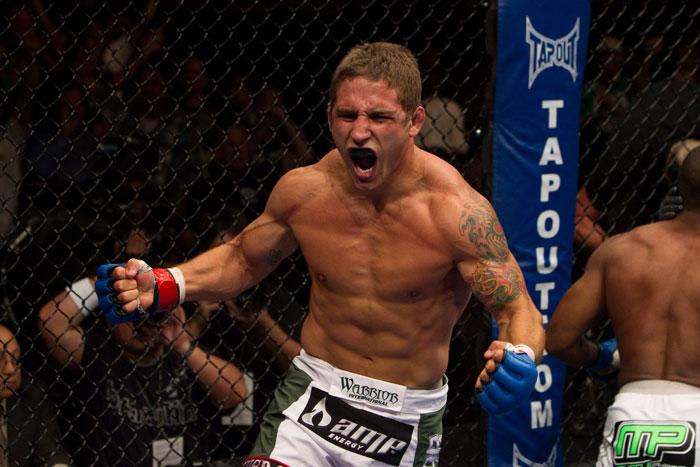 Chad Mendes didn’t look like your typical UFC rookie when he set foot in the Octagon in February to take on Japan’s Michihiro Omigawa. Far from it in fact, as he drilled out a shutout three round decision win to improve to 10-0 as a pro.

“I didn’t have the UFC jitters,” said Mendes of his debut at UFC 126 in Las Vegas. “In my first WEC fight I had way more, and I was basically treating this like it was another WEC event with a different name. I felt good, I felt confident, and I felt great that entire training camp. My hands felt good and I was really excited to get in there and showcase myself. Every fight I’m getting better and feeling more confident throwing them, so I was excited to get in there and show it.”

Mendes dropped and bloodied Omigawa with his standup attack, but also showed off his ground game over the course of the 15 minute battle. It was another notch in the belt of the former two-time Division I All-American wrestler, whose calm under pressure may come down to a couple of factors, including his lifelong career on the mat.

“I’ve been competing my entire life, and I basically know that the confidence comes from the hard training,” he said. “If you put in the time and put in the effort and do what you need to do in the camp, you shouldn’t really be too nervous or afraid when you get in there. Just the background of wrestling and competing, you’ll have 50 matches in a season, and going head to head like that so many times, that really helps. It helped build my confidence when I first came in and I had the target on my back. Everybody was expecting good things from me and I did have some jitters in the first fight, but after that, it was just cool to see that many people backing you up and saying good things about you.”

That target was placed there firmly – yet unintentionally – by his good buddy and training partner Urijah Faber, who made it clear to the media at a UFC event shortly after Mendes’ signing to the WEC that the Hanford, California native was going to be the future at 145 pounds. Mendes, who was walked down press row and introduced that night, took it in modestly, but now there would be plenty to prove.

And there was nothing wrong with that for him, as he defeated Erik Koch in his WEC debut and then ran off four more victories without a loss. Of course, the biggest three wins were the last three, as he turned back Cub Swanson, Javier Vazquez, and Omigawa. Now “Money” Mendes wants a shot at the gold belt currently worn by Jose Aldo.

“I definitely feel like I’m in line next for this title shot,” he said. “I think I deserve it, and I’ve proven myself.”

He has, but a division that had a bleak outlook after Aldo dominated Faber and Mike Brown is suddenly hot again, and there are a bunch of different storylines that will play out in the coming weeks. First, there’s April 30th’s UFC 129 show in Toronto, where Aldo will defend his crown against Ontario’s own Mark Hominick. Next, there’s the impending arrival of former lightweight contenders Kenny Florian and Tyson Griffin to the featherweight division, a development that Mendes has been and will be watching closely.

“We’re getting a lot of great talent coming down from ’55 now that ’45 has been thrown into the mix in the UFC and a lot of these guys that had names for themselves at ’55 that maybe were a little small for the weight now have a chance to come down and showcase their skills at ’45,” he said. “But I don’t think that’s always the best thing to do. Just because you’re cutting a lot of weight and going down to the next weight class doesn’t always mean you’re gonna do better. A lot of guys, that will actually hurt them.”

Not to mention that the existing contenders at 145, including Mendes, have something to prove against veteran fighters who have already made their names in the organization.

“It almost feels a little disrespectful,” said Mendes. “These guys may be thinking it’s going to be a little easier coming down, but I think it’s going to be a rude awakening for them. I’m sure some of them will do well, but this is my division – I’m doing well, I feel strong here, and we’ll see what happens.”

Just before he turns 26 on May 1st though, Mendes will be kicking off his birthday celebration a day early, as he will be Octagonside for the Aldo-Hominick bout at Rogers Centre. And he’ll be more than a fan that night.

“I’m real excited to see this fight,” he said. “They’re both great standup fighters, very technical and very fast, but I think Aldo’s gonna be a little too devastating for Hominick. Hominick likes to walk his opponents down and he doesn’t really use quick footwork to get out, so I think Aldo’s leg kicks are gonna tear that front leg up. But you never know – one punch and anything can change, so I’m super pumped to see what’s gonna happen.”

More importantly, he’s pumped to see what’s going to happen in his own career once either Aldo or Hominick has his hand raised. That waiting has been the toughest part for him, but he’s still training, still studying, and he’s ready for the next phone call to let him know what his immediate future holds.

“I’m looking at both of them (Aldo and Hominick), watching film, picking up their tendencies, finding their weaknesses and taking them apart,” he said. “Hopefully I’ll get the call.”

When he does, he’ll be ready.

“I feel like I’m the best one at 145 and I’m definitely gunning to get that belt.”