The moment has arrived for Lorenz Larkin 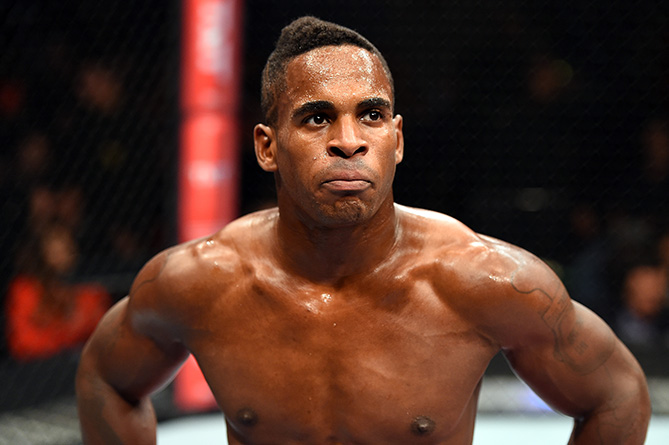 Many fighters use their time in the spotlight as a platform, an opportunity to let the world know who they are and what they stand for. Lorenz Larkin has his platform this Saturday night when he makes his Pay-Per-View debut against Albert Tumenov on the UFC 195 main card, and his aim is clear.

“Every fighter wants to fight for the belt – that’s a given,” Larkin said. “But I want exciting fights. I want fights that the fans really want to see and fights that make me excited. Every time, I’m gonna bring it to the best of my ability. I’m not gonna try to go out there and just outpoint a fighter. And I want the same thing from the other half. I want fighters that want to come out and bring it and put on a show and have memorable fights. I’m tired of looking at fighters that are boring. I hate boring fights. I hate watching them, I hate being in them, I hate thinking about it.”

It’s the manifesto fans want from everyone who steps into the Octagon, but not everyone is willing to go that route, and even few will go on record with such an intention. It’s understandable, considering that one loss could mean the difference between another meaningful fight in the UFC and the unemployment line.

But if those on the fence need an example of someone who laid it all on the line every night and still came up aces, look no further than the 29-year-old Larkin, who was on the verge of that unemployment line a year ago.

As 2015 approached, the UFC record of the Riverside, California native read 1-4. “The Monsoon” had a nice run in Strikeforce, winning four of five fights and beating the likes of Gian Villante and current UFC welterweight champion Robbie Lawler. But after a questionable decision loss to Francis Carmont in his Octagon debut in April of 2013, Larkin never really got on track, forcing him to make a last ditch effort to turn things around by dropping from middleweight to welterweight.

Yet as he prepared for a January 18 bout with John Howard, Larkin wasn’t feeling the enormous weight of a possible pink slip on his shoulders.

“That was the first fight at ‘70 and that would either make or break it,” he said. “There was pressure on me, but with how I felt in camp, there was a lot of confidence. Before that fight, I’ve never touched 170 since high school. It’s been a long time, but being in camp, being lower in weight and knowing how strong I felt, it was a confidence booster coming into the fight.”

Larkin didn’t shy away from contact against Howard, didn’t seek the easiest way to stall and outpoint his foe. He went after “Doomsday” like he goes after everyone, win or lose, but this time, everything clicked. Larkin knocked Howard out in two minutes and 17 seconds, and five months later he issued a similar fate to Santiago Ponzinibbio, this ending coming in the second round. When the smoke cleared, Larkin had two knockout wins in his new weight class and two post-fight performance bonuses. This Saturday, he faces Tumenov in a bout expected to be one of the best to kick off 2016, and again, his mindset is the same as it was last year, the year before that, and the year before that.

“I felt like that for a long time,” he said, hoping that he is part of a new movement where looking to finish a fight is the primary goal of every mixed martial artist. He uses fellow welterweight and Strikeforce veteran Tyron Woodley as an example.

“Tyron Woodley was hated,” Larkin said. “In Strikeforce, he was kind of a boring fighter, and I’ve seen him get booed, even after his wins. And that was something I looked at and never wanted for myself. I would hate that feeling. But when he came to the UFC, he was a totally changed fighter. He’s one of my favorite fighters to look at now. He’s exciting to watch and he uses everything. He’s not laying on guys no more. He’s going for the finishes, and I think that’s where the sport is going now. Everybody’s looking for the finishes now. Nobody’s trying to do the boring, lay and pray fights anymore.”

Of course, Larkin notes, this doesn’t mean fighters should stick out their chin and throw haymakers until someone falls down. He enjoys the ground game as much as the stand-up aspect of the sport, as long as it’s being done with the right intentions.

“I’m not saying you’ve got to stand and strike with your guy, but if you want to be exciting and go for it all, then put everything together,” he said. “You can be an exciting wrestler. There are wrestlers out there now that are exciting. But there are some wrestlers where all they try to do is take you down and lay on you and squeak out the round. That type of stuff is boring to me. I feel like it’s not good for the sport. People know when you take the safe route. It’s noticeable and I feel like you get more respect just going out there and fighting. I fight because I love fighting. And now I get to fight in front of a lot of people and get paid for it. If I wasn’t fighting in the UFC, I’d probably have some normal job and be fighting underground somewhere.”

That ship has sailed for Lorenz Larkin. He’s in the big show now, and it looks like that will be the case for a long time, especially since he’s performing with no safety net on fight night.

“I’m a realist – you’re never going to get the finish all the time, but you have to put it all out there like you are trying to finish a fight,” he said. “And I’d rather be the guy that doesn’t put his guy away, but the whole fight, he’s trying to. I want to be the guy going for the finish and not taking the safe route. I’ll go full bore on something, and if it doesn’t work, it doesn’t work.”