Molly McCann’s Performance Was ‘Two Years In The Making’

Liverpool's Molly McCann Believes Her Latest Performance Was The Biggest Moment Of Her Career To Date
By Zac Pacleb, on Twitter @ZacPacleb • Oct. 19, 2021

“I will win my next UFC fight on the 4th of September in America. It will be my defining moment in MMA. I will get a new 4-fight deal, and the parties and celebrations will last for the month.”

That’s what Molly McCann wrote in her journal ahead of her fight at UFC Fight Night: Brunson vs Till, and that’s what she made happen with her Fight of the Night performance against Ji Yeon Kim right down to the weeks and weeks of celebration in Liverpool.

Might as well call her “Mystic Molly” at this point.

“To be honest, I still haven’t come down from cloud nine because the city really, really has a good way of living the wins and living the losses with you,” McCann said. “Just everyone keeps congratulating me for how good the fight was. This is the best moment of my fighting career, to be fair. It does surpass UFC London.” 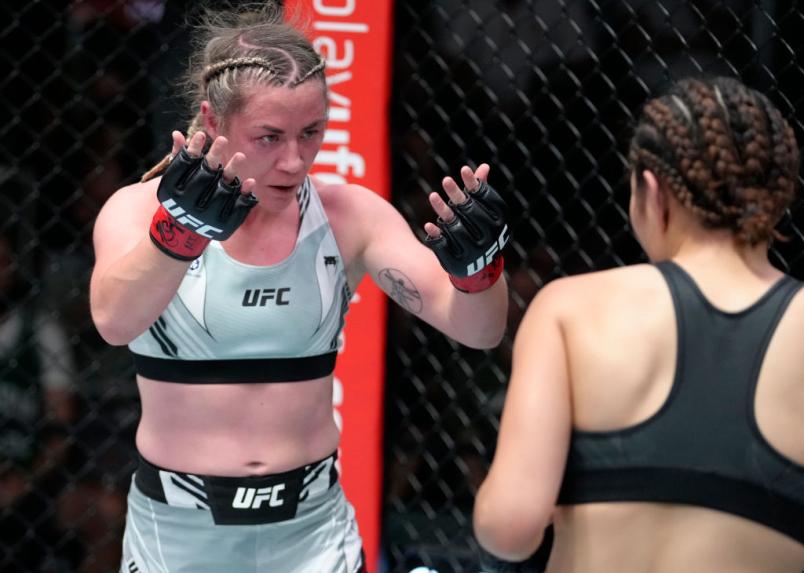 That’s a lofty statement considering McCann’s win in London made her the first Englishwoman to win a fight in the UFC, but if you’ve ever spoken with her, you know she doesn’t make that statement lightly.

Hearing McCann recount her first week back home is to listen to a woman who is in full lockstep with her city. The celebrations included: Liverpudlian musician Jamie Webster bringing her on stage, going to Everton FC’s 3-1 win over Burnley at Goodison Park and many, many of those “bevvies” she said she wanted when Michael Bisping interviewed her in the Octagon.

It’s well-earned for “Meatball,” who broke a two-fight losing skid and got her hand raised for the first time since October 2019.

“It was two years in the making,” McCann said. “I’m not going to lie, I’m really not going to lie. When you talk about Beatlemania and Conor McGregor-mania, wait until you see me and Paddy walk around Liverpool and – I just can’t get over it. Liverpool’s city center is as big as the Las Vegas Strip, and I just can’t go anywhere. It’s mad. It’s amazing, to be fair.”

Of course, winning a Fight of the Night bonus means there was some back-and-forth to the affair. Despite a spry start from McCann in the first round, a clash of heads caused her to crumple to the canvas.

McCann said she doesn’t remember the moment too clearly, just that she went to throw a punch and came to on the floor. Instincts kicked in, and she clinched up with Kim to negate any more damage coming her way.

“My mind basically thought, ‘Oh, no. Not again,’” she said. “I just had a split second feeling of, ‘I just can’t lose. I just can’t feel that feeling again.’”

That left McCann with two rounds to get things back on track, and in classic “Meatball” style, that meant getting in Kim’s face. However, given Kim’s 10-inch reach advantage, that also meant walking through some fire before getting her own offense going. McCann did just that, and perhaps the thing she’s most proud of is her performance in clinch situations along the fence, which gave her some problems in her most recent losses. McCann said she also hurt her hand when she threw a left hook in the first round, but as the fight moved into its final minute, she “channeled her inner-Max Holloway,” pointed at the ground and started swinging.

It was a real Scouse performance through and through, and it’s the kind of fight that makes her such a fan favorite no matter where she’s competing. McCann, along with Next Generation MMA teammate Paddy Pimblett, relatively stole the night. Pimblett made his long-awaited UFC debut and came away with a dramatic first-round knockout victory. McCann made her way through the APEX to congratulate her teammate cageside, and they seemed to have the MMA community eating out of their palms on social media.

“We took over the world tonight!”

“What’s nice is I’m authentically myself,” McCann said. “It took me a long time to be able to get there without fear of judgement. But being very honest, with social media, some people put on fake stuff or, ‘Oh, don’t put that on if it’s not filtered or if you don’t look a certain way,’ but for me, it’s unapologetically me, and I was literally in Las Vegas drinking Dana White’s whiskey (Howler Head). The next weekend, I’m in a working man’s pub sat with all 60-year-old men watching the football match. It’s all just real, and I don’t think I’m anything that I’m not. I think this is why people are drawn to me and my team because me and Paddy said, ‘What you see is what you get.’

“We was all buzzing because, as a team, we said we was going to do it, and we did it,” she continued. “We won’t get ahead of ourselves because I don’t think what me and Paddy say is rude to other fighters or discredits anyone else. It’s just saying what we can do. I think people will like it, but it was good, reading online, it was like, ‘You want people in your corner who clap for your success and aren’t bitter or jealous or whatever,’ and that is exactly what it will always be with me and Paddy.”

Back home, McCann said the enthusiasm has only continued. She joked that she’s like the “queen of the city.” One morning, though, she woke up with some of those post-fight blues and wondered what she was supposed to do now while she waited for another opportunity to fight, and then she got back to giving back to her community.

McCann is involved with an organization called Weapons Down Gloves Up, which is “focused on providing opportunities to young people” through athletics, education and employment. She is also on the English Mixed Martial Arts Association board, which is recognized by the International Mixed Martial Arts Federation. 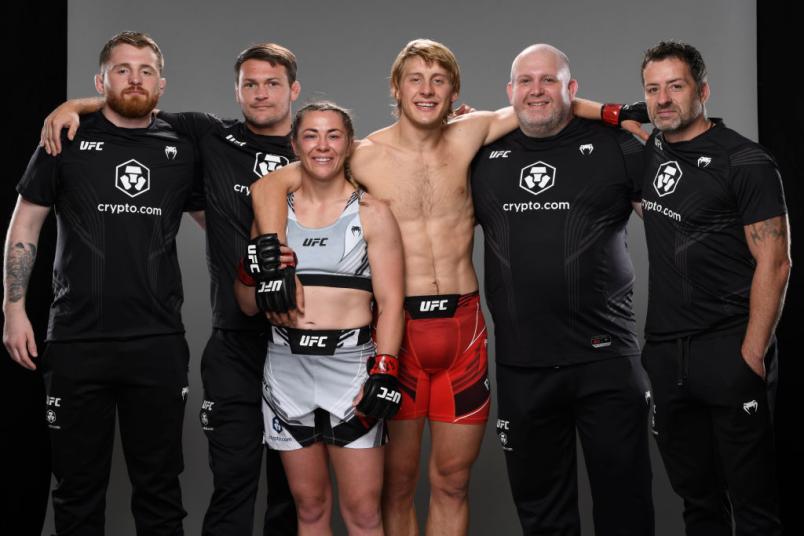 Molly McCann of England and Paddy Pimblett of England pose for a portrait backstage after their fights during the UFC Fight Night event at UFC APEX on September 04, 2021 in Las Vegas, Nevada. (Photo by Mike Roach/Zuffa LLC)

Molly McCann of England and Paddy Pimblett of England pose for a portrait backstage after their fights during the UFC Fight Night event at UFC APEX on September 04, 2021 in Las Vegas, Nevada. (Photo by Mike Roach/Zuffa LLC)

While it seems like that’s a busy haul to shoulder on top of her fighting career, it’s just par for the course. It’s the give-and-take relationship to Liverpool that fuels McCann, and it’s one she has had going back to her days in Cage Warriors. McCann has spoken a lot about her start in MMA coming after watching Ronda Rousey at UFC 157, and she said her coach’s phone has been ringing nonstop with people asking to train or visit the gym. For a fighter who has already made history in her career, the inspirational moments keep on rolling in for “Meatball.”

“Every single person that I’ve seen in Liverpool has come over to me and said, ‘You have done yourself and the city so proud. We’re so proud of you,’” McCann said. “Just for them to acknowledge my work – and this is casuals and neutrals who don’t really watch the UFC … That (fight night) was on in every pub in Liverpool and every bar, as well as everyone’s house that was watching it back at home. It was one of them nights that was what it was like for me when I watched Ronda Rousey fight and the next day I went to the gym. I really feel like me and Paddy and Tom (Aspinall), and even though Darren (Till) didn’t get the win, we really did something in the city that night.”